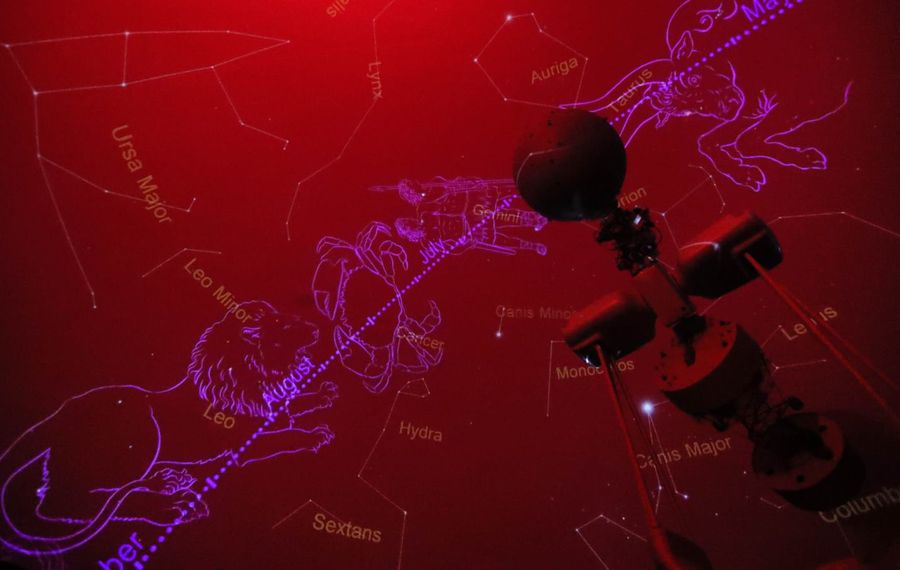 There is one place in Buffalo where the stars always line up right. Since the 1960s, the planetarium at Williamsville North High School has been orienting us to the stars in the heavens.

Recently refurbished, it is state of the art, up to any video presentation or light show. Its resident celebrity, nicknamed Jake, goes back to the '60s. Jake is a kind of globe that sits in the middle of the space.

The globe was painstakingly drilled long ago -- heaven knows how -- with tiny pinpricks that correspond to the stars we see from the earth. As Jake turns, the stars turn overhead. You can see how the constellations look to us in any season of the year, or how they look to folks on the equator, or in Brazil, or anywhere.

Such wonders are accessible not just to students, but to adults. Throughout the school year, the planetarium plays host to a monthly sky tour and planetarium show open to the public, and also an entertainment laser show designed to dazzle.

A presentation titled "April Sky Tour and When Black Holes Collide" was just too cool to resist.

The planetarium is in a wing of Williamsville North handily labeled "Planetarium." There is plenty of parking. The show was at 7 p.m., and 15 minutes ahead of time, a convivial line had formed inside. It seemed a lot of folks were regulars. Everyone looked excited.

Mark Percy, the planetarium's gregarious director, was greeting visitors. But he puts many of the shows in the capable hands of Tim Collins and Steve Dubois. Collins, a systems analyst at Roswell Park by day, was running this particular show. DuBois, a graphic artist, was signing in the audience members. 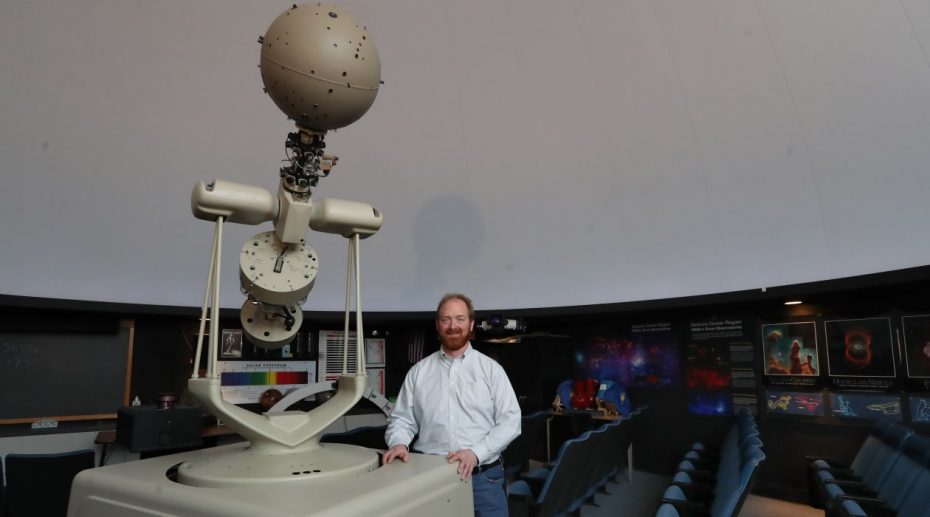 Under the dome of the planetarium, I took a seat in a back row. I got to know my neighbors. One was an artist, who told me his name but did not want it published. Another was Courtney Tyska, an Amherst dentist.

Conversation flowed before the lights went down.

Tyska turned out to be a regular, to the extent that she now has her own telescope, and Percy is helping her learn to use it. She said the planetarium's back row was the place to be. "You can see everything easily."

The artist wishing to remain anonymous said: "If I were an architect, I would have every room in my house look like this, and I would have my own skies and sunsets and stars." 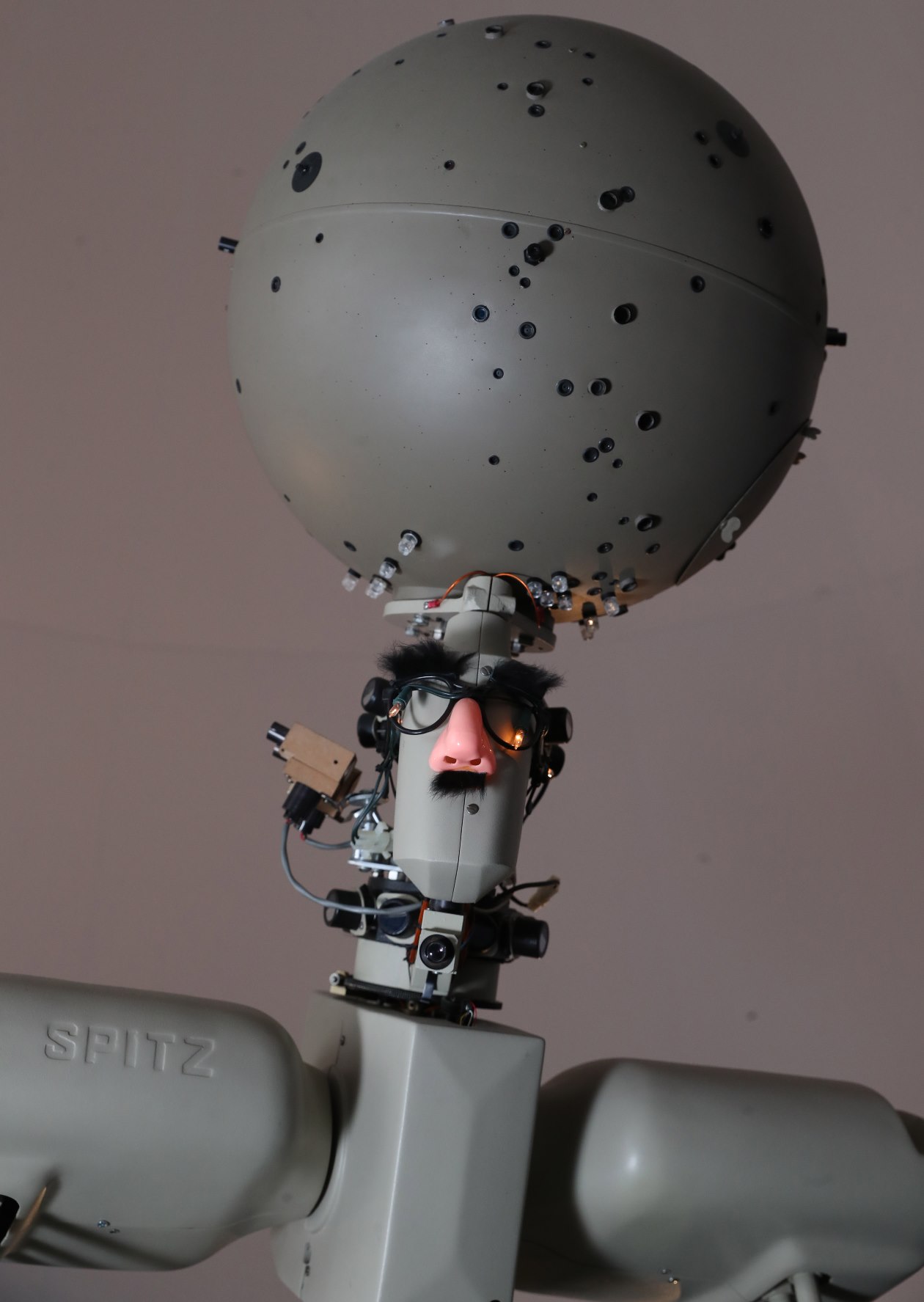 A half-hour video explored the physics of black holes. More entertaining education followed. I learned a little about a lot.

About black holes, "the corpses of dead stars that shine no more." About light years, gravity waves, and laser interferometers. About George Lemaitre, the Belgian priest who came up with the Big Bang Theory.

Last came the sky tour. A video presentation showed the interesting stars, planets and constellations we can currently spot. I love constellations, and this was the highlight for me. Think how timeless this lore is. In the Bible, the Book of Job referred to Ursa Major and Orion.

This particular evening had a twist. Collins, through his celestial channels, had received word the International Space Station would be passing overhead. He herded us outside to see.

So there we stood, shivering, looking up. People pointed and -- there it was! With an orange tint, the space station appeared above Venus and glided slowly over our heads, looking a bit like a plane. It was 254 miles high in the sky. The sight was a thrill.

By then it was around 9 p.m. and most people left. I followed the leaders inside with a request. Could we see what Jake could do?

Jake is not featured in every presentation. This one had skipped him. But Collins and Dubois gamely let my friend and me see. It was heavenly -- literally. The stars twinkled in inky blackness.

All I could think was that we are born to be lost in space, to wonder what is out there. Our guides, judging from their enthusiasm, seemed to agree.

Tip: Register online in advance. The next educational presentation is "May Sky and Exotic Stars" at 7 p.m. Wednesday, May 2.