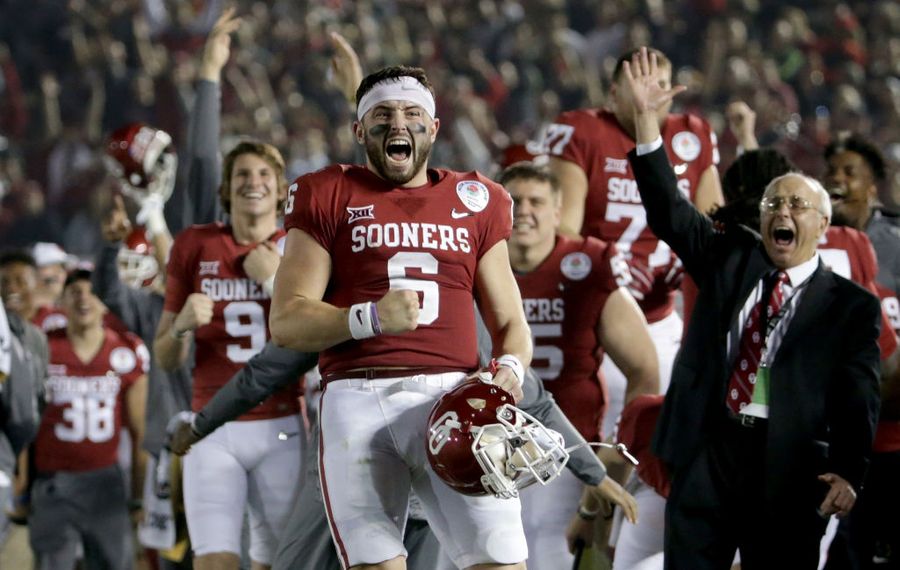 ESPN college football analyst Kirk Herbstreit recently said on a conference call with reporters that he ranks Oklahoma's Baker Mayfield as the No. 1 quarterback in the draft.

But when Herbstreit was asked what types of traits a quarterback needs to have developed by the time he leaves college that are hard to improve on in the pros, he gave a rousing endorsement of Mayfield that went far beyond a simple ranking.

Mayfield has the answers to anything a defense can throw at him, Herbstreit believes. He gave a lengthy reasoning:

"I really think that you’ve got to find a quarterback that, No. 1, I don’t think it’s the system necessarily that he’s coming out of, I think it’s an ability to process information," Herbstreit said. "Not just the offense, but the defense. In college, you’re going to see four, five different defenses maybe on a given Saturday, unless you’re playing Nick Saban. And you get into the NFL on a Sunday and you’re seeing how many different coverages, 15 maybe in a game? And so, there’s a learning curve there for a quarterback to adjust to processing and having answers.

"When I watch NFL games, whether it’s (Tom) Brady, what (Nick) Foles was doing late in the year, or what (Jared) Goff was doing, these great quarterbacks, they have answers. And how do they have answers? Hours and hours of prep during the week. Understanding, when they show this look, they’re going to bring this blitz, and when they do that – bang – this is our answer.

"So to me," Herbstreit continued, "it’s finding the quarterbacks – not how tall they are, not how far they throw the ball, not how fast they are – how quickly they process information, and how quickly they have an answer to whatever their computer in their mind reads and sees, and how quickly they can get the ball out and make a good decision and throw an accurate ball. How you do that, to me, that’s why Baker Mayfield – I’m a little bit on an island there (in terms of ranking him No. 1) – but all the things I just described are Baker Mayfield. Again, you can get scared off of him because he’s tall, but I’m not caught up in how tall you are. I'm caught up in quick decision-making and accuracy. To me, that’s why Baker is at the top of the board."

Here is Herbstreit's ranking of the top four quarterbacks:

Herbstreit believes Mayfield and Darnold are clearly the top two, with Rosen and then Allen trailing behind. He also said Penn State running back Saquon Barkley is one of the top prospects at the position in the last 15 years and compared him to Adrian Peterson.

(For what it's worth, the analytics site Pro Football Focus also ranks Mayfield No. 1. At the NFL Combine, Mayfield was measured at 6-foot, 5/8 of an inch.)

Here are Herbstreit's breakdowns of each quarterback:

“I’m a little bit different” in my rankings, Herbstreit said. “Based on a lot of the analysis I’ve heard for the last couple of months, I know a lot of people are kind of enamored with Josh Allen and his arm strength and there’s a lot of talk about what he brings to the table. And also we heard a lot about Sam Darnold and all these quarterbacks. For me, I start with Baker Mayfield as my top guy. It has everything to do with production. It has everything to do with accuracy and decision-making.

"I’m very big on – people get caught up in how athletic a guy is, how big an arm a guy has. I’m kind of a guy that goes back to, when I watch quarterbacks, it’s decision-making and accuracy. Baker Mayfield, to me, is off the charts in all those areas. If he were 6-foot-3, people would be marveling at this kid. But he’s not 6-3 so of course there’s some concerns. He played behind as big as an offensive line as you would ever see in the NFL and had no issues whatsoever sitting in the pocket, making throws and finding those passing lanes and evaluating defenses both on the inside and the outside. His accuracy is incredible. Reminds me of a young Drew Brees when he was coming out of Purdue."

"I would have Sam Darnold right after Baker. Darnold may have the most upside if you’re looking four, five, six years down the road. I think he’s still raw," Herbstreit said. "I think he could’ve used another year of college to kind of grow and mature in certain areas. Now, that’s easy for me to say – he’s maybe the top pick overall, in the top five – so it’s obvious why he came out. But of all these guys just based on what I watched, he’ll make so many splash plays that make you just marvel at how good he is, and then you’ll see him do some things that still show some immaturity: leaving the pocket a little bit prematurely, doing some things where he’s relying still on his athletic ability when he doesn’t necessarily always have to do that. But his arm strength, his ability to improvise, and coming out of an NFL-style offense in college at SC, I would put him at two.

"After that it’s a mixed bag. I would probably lean a little bit toward Josh Rosen at UCLA."

"I agree with a lot of the analysts out there saying, when everything is clean – meaning no pressure, pocket’s clean, drops back – kid’s going to make the decision where to go with the ball, nine-and-a-half or 10 times out of 10, he’s going to make the right read and an accurate throw," Herbstreit said. "My one concern where he’s going to have to grow is when he gets pressure, he’s not quite as comfortable as some of these other guys at improvising. You know from watching the NFL, you get a lot of pressure. And you’ve got to be comfortable with being able to get out of the pocket and buy a little bit of time and then should be able to make a good decision and make a good throw. So that’s an area he’s going to continue to grow. But I would put him there at three."

"Josh Allen, to me, he could be a superstar. He could be the Carson Wentz of this draft. No one really knows," Herbstreit said. "But he’s a hard one for me to personally evaluate because he’s coming out of Wyoming in the Mountain West. He’s lost a lot of his better players after the ’16 season. He was working with some new personnel at receiver and offensive line and I think it affected him. Especially when they were up against some of the bigger schools, I think they were overmatched and it really had a negative impact on him. But I know he’s had a lot of people impressed with his personal workouts, his arm strength, he can make plays on the run. So there’s a lot to like about him. To me it’s just a little more of a roll of the dice because of the unknown coming from a smaller school."

See it: Why PFF is so low on popular Bills mock draft QB Josh Allen