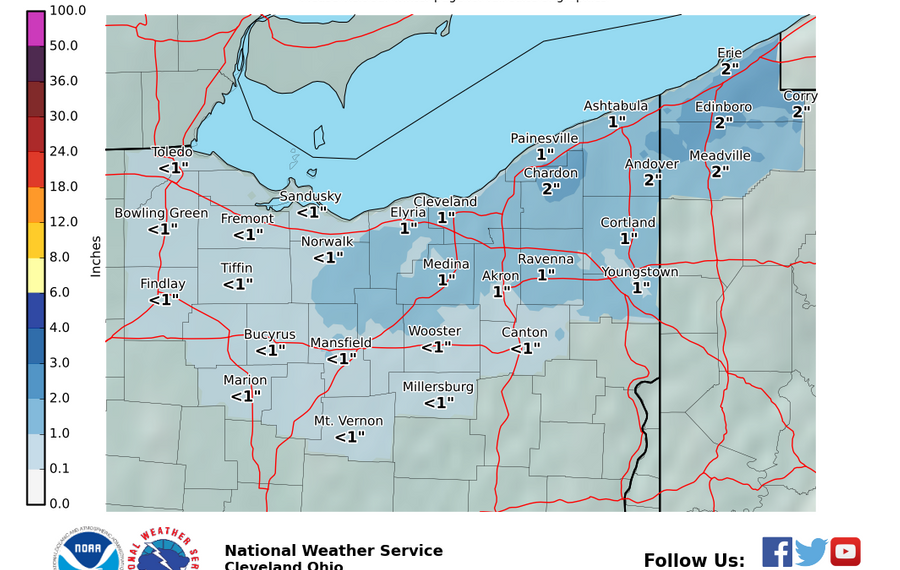 There's about a 90 percent chance that Buffalo's 199.4-inch seasonal snowfall during its infamous winter of 1976-77 could melt out of the record books tonight. 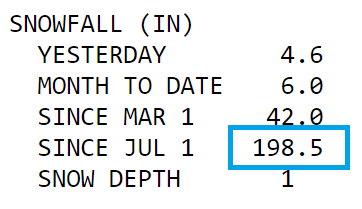 A late push of snowfall on Tuesday put Erie, Pa., on the precipice of a new seasonal snowfall record. (NWS Cleveland)

Erie, Pa., has closed within a single inch.

The Pennsylvania city got a big boost Tuesday with 4.6 inches of snow, bringing the city's seasonal total to 198.5 inches.

Forecast models suggest there's at least another inch of snow in tonight's skies – maybe even 2 inches – to not only eclipse Buffalo's all-time mark set during the winter that brought the Blizzard of '77 but also to hit the 200-inch mark for the season.

The National Weather Service in Cleveland, which covers the Erie, Pa., forecast area, calls for a 100 percent chance for rain and snow in Erie late tonight with new snow accumulations of less than one-half inch, but offers a 90 percent chance Erie will go over the top on Thursday.

The flakes that should put Erie over the top should come by mid-day on Thursday, forecasters project.

Snow is expected in Erie overnight into mid-morning Thursday, which should push it past Buffalo's all-time snowfall mark for large U.S. cities when it logged 199.4 inches during the winter of 1976-77. (NWS Cleveland forecast plot)

Erie's chase to the snowfall record seemed tenuous when it entered April about 7 inches shy of the record.

It's average April snowfall is 3.1 inches, and it has only logged that much snow after April 1 once this century, when 14.8 inches fell in 2005.

The extended snap of cold weather deep into April has bolstered Erie's quest. Six inches has already fallen in Erie this month.

The chase is also generating headlines 90 miles to the west of Buffalo.

A GoErie.com report today led: "Another inch of snow will give Erie the winter weather record."

Erie collected more than 40 percent of its seasonal snowfall total during a single week between Christmas and New Year's Eve.

In all, 81.7 inches fell in Erie, Pa. as it was pummeled by lake-effect snows in a scene reminiscent of late December 2001 in Buffalo.