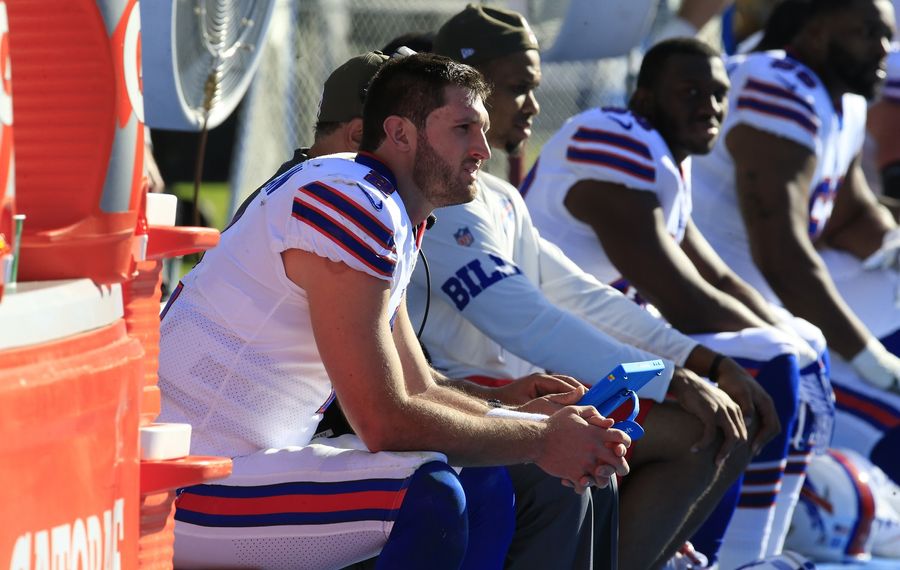 Trying would be a tame word to describe Nathan Peterman’s rookie season.

Nothing short of a disaster accurately describes the 2017 season for the Buffalo Bills’ quarterback.

“You've got to actually look at what happened and take it all in,” Peterman said Tuesday during the Bills’ offseason conditioning program. “Feel the pain of those losses. All the mistakes that you made, but also the good things that you did, as well. Just take those all in, learn from them, and move on.”

Peterman’s rookie season had a little bit of everything. It started on a high as he won the backup quarterback job coming out of training camp and got even better when he earned his first start in Week 11 against the Los Angeles Chargers. You know what happens next.

Peterman crashed and burned on the West Coast, throwing five first-half interceptions in a blowout loss. The decision to bench Tyrod Taylor in the middle of a playoff race for a rookie fifth-round draft pick was widely panned in the national media, and the Bills reversed course. Taylor returned to the starting lineup, but a knee injury kept him out of the Week 14 home game against the Colts. Peterman got the start – in a blizzard – and threw a touchdown pass before suffering a concussion.

When Taylor did the same in the Bills’ playoff game against Jacksonville on the final drive, Peterman came in, but threw an interception that closed the book on Buffalo’s season.

Peterman took January and February to “exhale,” as he put it, but says he’s ready for 2018.

“Look, we've got a new offense, new faces, a lot of new things,” he said. “I'm just excited to get started working at those new things.”

The decision to trade Taylor to the Cleveland Browns left Peterman as the only quarterback on the roster for a time.

“That's the NFL. There's a lot of change in the NFL,” he said of Taylor being moved out. “Was very thankful, though, for Tyrod being here last year. I learned a lot from him. Tremendous leader, tremendous work ethic he had.”

Peterman said he didn't know whether the decision to trade Taylor was a vote of confidence in his abilities, but the public message from the team all offseason is that they still believe in him despite his rookie trials.

"I'm confident that he is wired the right way and he'll learn from the moments both high and low that did or didn't go his way," coach Sean McDermott said at the NFL Scouting Combine. "He's an extremely confident young man and a guy that works hard. Sometimes as a rookie, in this case as a rookie quarterback, you're thrust in a situation where everyone sees your body of work. I know his second year will be better than his first year. I thought he did some really good things his first year. When you look at the DNA, he's a fit for us in that regard."

The Bills added another quarterback to the roster in free agency with the signing of AJ McCarron. While it’s widely assumed General Manager Brandon Beane will add another quarterback in next week’s draft – perhaps by moving up in the first round – if he’s unable to do that, McCarron and Peterman will get a chance to seize the job.

“That's how I'm approaching it,” Peterman said. “That's certainly a goal, but I think that's a goal for every person on this team, is to start.

“Football has always been about competing. I'm always competing with other players, but also with myself too, just always trying to get better. That's a big focus this offseason of mine. The previous months I really tried to find a way to get better while I was away from here, and then same thing the next few months while I'm here.”

Peterman did that by visiting 3DQB, a biomechanics training facility in Huntington Beach, Calif., that focuses on improving a quarterback’s functional strength and conditioning, mechanics and motion analysis and mental and emotional management.

“A lot of mechanical things -- throw with your body a little bit more,” Peterman said. “Get a little bit more arm strength, as well. A lot of drills, a lot of good things that I can take with me.”

Beck said the group has largely been working with quarterbacks prepping for OTAs for the last eight weeks and many will return in June and July to get ready for training camp.

Got some work in the past few days with @buffalobills Quarterback @natepeterman. Nathan is a smooth thrower with consistent feet which allows him to make all of the throws.
🏈🏈🏈https://t.co/vaBovWwxM2
🏈🏈🏈#JoeLicataFootball #RedefiningWNYFootball #NFL #BuffaloBills pic.twitter.com/6mB1LFtq76

A year ago at this time, Peterman was home in Jacksonville, preparing for draft weekend, which he spent at a family reunion on the beach.

“Kind of just took it as a relaxing weekend and a family reunion, because I don't get to see them very much,” he said. “We enjoyed it. Obviously it can be a stressful time. There's a lot of unknowns. It's just like the NFL. It's so many things that you would never have expected – a lot of twists and turns. That third day came around, coach McDermott, Mr. and Mrs. Pegula called. It was just an unbelievable feeling and definitely something you can never forget."

Path to the Passer: QB consultants provide bridge to NFL for top draftees

Peterman didn’t sound like someone who was going to spend much time watching this year’s draft – “it's a pretty big media circus, so I'll hear who the first pick is, for sure” – choosing instead to worry about what he can control.

“Just improve. That's the word that all the coaches are using,” he said. “Especially coach Daboll – I think that's his favorite word. That's what we're going to be focused on throughout these next two months, is improving. That's really what I feel like my mindset is always. It's kind of an obsession of getting better. You have to have that mentality.”