But area Catholics – one way or another – are paying.

To compensate sex abuse victims, Malone said the diocese will rely on insurance coverage, investment reserves and the possible sale of property, all of which trace back to the wallets and pocketbooks of people in the pews.

The diocese's self-insurance plan and its premiums for excess liability coverage are funded primarily by contributions from parishioners. Its investments grew out of parishioner gifts. And its buildings were constructed, purchased or donated thanks to the generosity of Catholic donors.

At most churches in the Buffalo Diocese, at least $20 of every $100 donated to an offertory collection goes directly to the diocese, according to a Buffalo News analysis of diocesan and parish annual financial statements. And for every $100 gift to the Catholic Charities appeal, about $35 goes into a fund controlled by the bishop.

"Every bit of wealth the Diocese of Buffalo has is ultimately the result of parishioner contributions. You can't help but conclude that parishioners are paying for this, either current parishioners or past parishioners," said Charles Zech, a research professor of economics at Villanova University who studies Catholic Church finance issues. 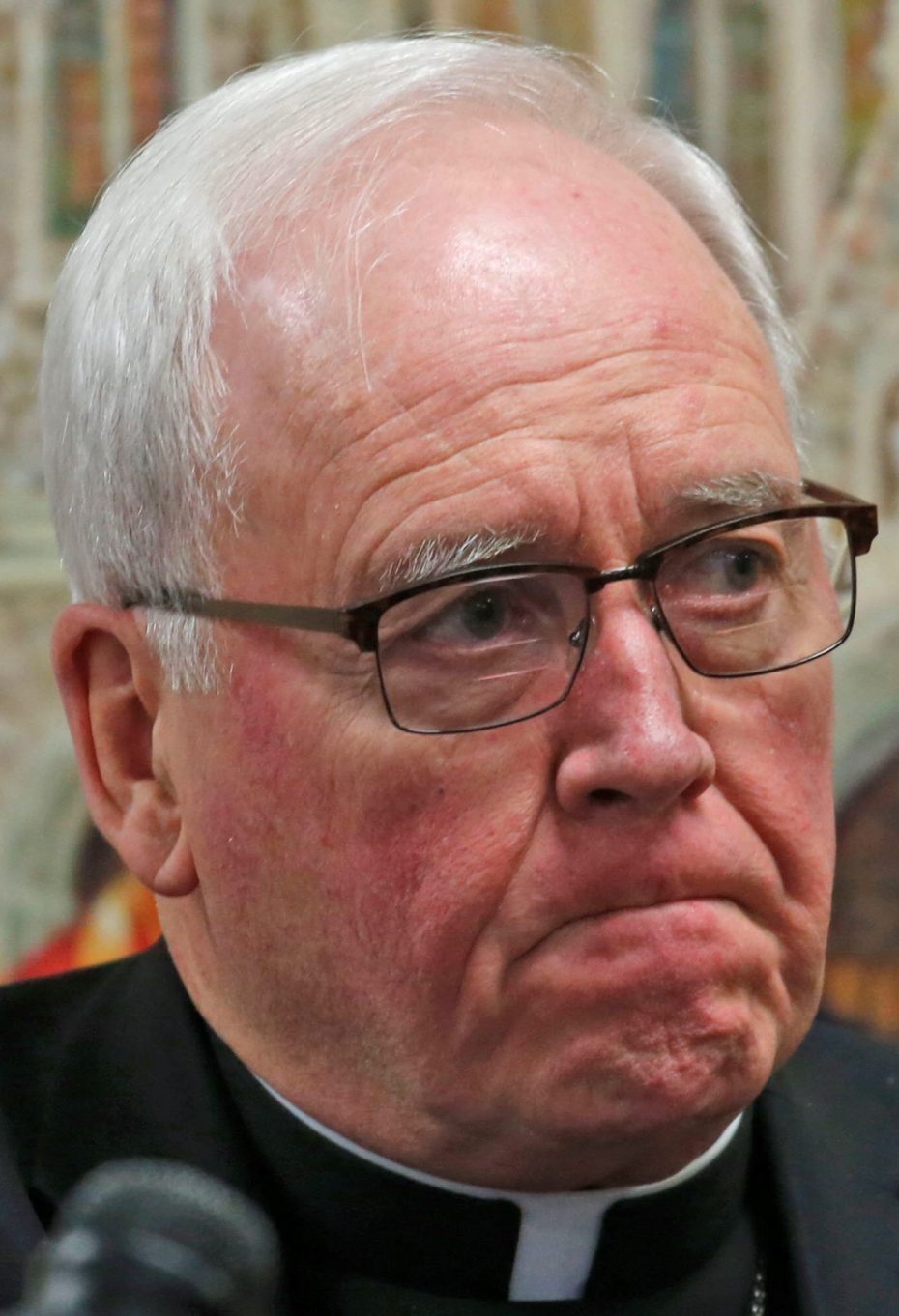 The diocese's total liability insurance cost in 2017 for parishes, schools and other entities was $7.2 million – less than a quarter of the diocese's overall expenditures. The cost of those plans more than doubled between 2001 and 2017. Catholic parishioners footed most, if not all, of the $94 million bill for insurance coverage over that time, according to The News analysis.

The annual financial report doesn't specify how much the diocese paid to settle cases of clergy sexual misconduct in the past or how much it set aside for future settlements.

And with lawyers from across the country lining up to represent clergy abuse victims, diocesan officials won't reveal those numbers.

The bishop and Steven D. Timmel, diocesan director of financial administration, both declined multiple requests to be interviewed for this story, through diocesan spokesman George Richert.

"Everything is very sensitive right now, but we continue to practice good stewardship," Richert said.

The diocese is still fielding claims to the Independent Reconciliation and Compensation Program announced in March. The program, similar to others in dioceses across New York, was designed to provide victims of clergy sexual abuse with financial settlements. Two retired judges are administering the Buffalo program and will determine who is eligible and how much they will receive. Victims have until June 1 to submit a claim.

The diocese is only accepting applications at this time from victims who had reported childhood abuse by a diocesan priest to the diocese at some point prior to March 1. Diocesan officials have said that number is between 100 and 115 people, but they've declined to discuss anything about money.

Among outstanding questions are:

Timmel said at a March 1 news conference that the diocese had paid $1.2 million in settlements over the past two decades.  The News subsequently learned that the amount included only diocesan funds, and not any monies paid by insurers to sex abuse victims on behalf of the diocese.

In 2016, the Buffalo Diocese quietly reached a $1.5 million settlement with a former Archbishop Walsh High School student who had sued in federal court in Hawaii, alleging abuse in the late 1970s and early 1980s by a former priest, James A. Spielman. A spokesman for the diocese told The News that the $1.5 million settlement included some funds paid directly by the diocese, but he declined to comment further.

The settlement angered some Catholics who had no idea clergy abuse from years ago was still being cloaked in secretive deals.

Szustakowski said she was disappointed that Malone, who had come from the Archdiocese of Boston, the epicenter of the clergy abuse scandal in 2002, operated in a similar secretive fashion as Boston prelates had.

"He should have learned there and he should have come here as a leader who was more open and dealt with it," said Szustakowski, a parishioner of the Newman Center at University at Buffalo. "Instead they chose to keep it all under cover and then when it comes out, it's worse."

The bishop's only public remarks about how settlements will be paid in the future came at the March news conference.

"This new independent reconciliation and compensation program will be paid from self-insurance liability and investment fund reserves," Malone said at the time. "We're also considering, if necessary, the sale of diocesan properties."

Terrence M. Connors, an attorney for the diocese, also said that diocesan representatives were trying to contact insurance companies with which the diocese had policies decades ago to see if those policies will cover claims under the new compensation program.

"We'll reach out to those insurance companies, many of whom may want to participate on a volunteer basis because it would contain their liability going forward," said Connors.

Diocesan officials said at the news conference it was too early to tell what it will cost to settle claims through the new program.

What sex abuse cost other dioceses

A similar program in the Archdiocese of New York resulted in 189 victims receiving more than $40 million – an average of $211,640 per victim.

Dioceses that settled claims brought through civil litigation ended up paying much more. Some of them were even bankrupted by settlements.

The Archdiocese of Los Angeles had to pay $660 million to 508 victims through a negotiated settlement, according to BishopAccountability.org, a website that chronicles the abuse scandal. The Diocese of San Diego settled with 144 victims in bankruptcy court for $198 million, while the Diocese of Davenport, Iowa, settled with 162 victims for $37 million, also in bankruptcy court, according to the website.

The biggest settlements happened in states that suspended statutes of limitations to allow decades-old cases of alleged clergy sexual abuse to move forward in civil courts. So far, New York hasn't adopted proposed legislation that would provide a so-called look-back window for old cases to be heard in the courts. The state's Catholic bishops for years have lobbied heavily against such a measure.

Some victim's advocates viewed Independent Reconciliation and Compensation Programs such as the one in Buffalo as further efforts by bishops to thwart the Child Victims Act, the latest version of legislation aimed at expanding the statute of limitations and establishing a look-back window for child sex abuse cases.

Zech said the Buffalo Diocese must have an idea of what it will cost to settle claims. He credited the diocese for clearly spelling out the factors administrators will consider when accepting or rejecting a claim and determining compensation amounts – a real nod toward transparency.

But he also said there's probably not much money on the table for victims.

"If I were a victim, I'd have high expectations, and I think they're going to be disappointed based on the information the diocese has provided on financing this," said Zech.

The Buffalo Diocese is self-insured for general liability claims. It also is part of the National Catholic Risk Retention Group, along with more than 50 other dioceses and archdioceses in the U.S.  The risk retention group allows members to purchase excess liability policies that cover clergy sexual misconduct at rates lower than those offered in the conventional market. Dioceses pool their funds in the group to cover claims.

The Buffalo Diocese in 2017 made $1.6 million in realized earnings on investments of $47.2 million, including $10.7 million that were designated for "potential uninsured losses," according to its most recent financial statement. It estimated its properties to be worth $11.2 million. It also listed a provision for potential uninsured losses as a $12 million liability.

Bishop gets $4M from Catholic Charities

Malone and other diocesan leaders have reiterated that donations to Catholic Charities will not be used toward any settlements. The charitable organization is in the midst of its annual appeal, with a goal of raising $11 million toward programs such as refugee resettlement and aid to domestic violence victims. Malone also said no monies from a capital campaign called "Upon this Rock," which concluded last year, will be used for settlements.

Each year, the diocese takes a portion of the Catholic Charities appeals and uses it for its own operations.  Typically, about $35 out of every $100 raised in the appeal goes into a fund controlled by the bishop.

Diocesan officials said that the Bishop's Fund for the Faith money was earmarked for various ministries of the diocese, including Daybreak TV Productions, the diocesan communications office, seminary training and campus ministry.

"In the end, we truly believe and we're committed to not spending the Fund for the Faith on settlements," said Richert.

Sharing the proceeds of the appeal has been the arrangement between the diocese and Catholic Charities going back decades, although donors can direct their gifts to exclude the Bishop's Fund, if they so desire, said Sister Mary McCarrick, diocesan director of Catholic Charities.

"Any person can make a donation to any location or any program and that's not part of the Fund for the Faith," she said.

Catholic Charities leaders said they don't know yet whether recent revelations about the extent of clergy sexual abuse in the Buffalo diocese will hurt this year's appeal. The campaign has generated more than $8 million so far.

A retired priest's February admission that he had molested "probably dozens" of boys in the 1970s and 1980s reignited concerns that the abuse scandal in Western New York was more widespread than diocesan leaders had previously acknowledged. The Rev. Norbert F. Orsolits admitted the abuse to The News after Michael Whalen of South Buffalo accused the priest of molesting him on a ski trip in the early 1980s. Other men followed Whalen with similar allegations against Orsolits and other Buffalo priests.

Under intense pressure, Malone in March released the names of 42 diocesan priests credibly accused of sexual abuse of minors, a list that included men who had been quietly removed from ministry years ago with no public explanation.

"I have not heard anyone saying directly to me, 'I'm not giving because of the scandal,'" said Robert M. Bennett, the former head of the United Way of Buffalo & Erie County and chancellor emeritus of the state Board of Regents who is serving as co-chair of the 2018 Catholic Charities appeal.

Bennett acknowledged he's concerned that the appeal could take a hit from Catholics expressing their displeasure with the diocese.

But he said withholding contributions from the appeal will hurt people in need who rely on Catholic Charities services. "It's not a good place to vent your anger. I understand the anger, but why hurt someone else?" he said.

Area pastors said it was too soon to tell whether weekly collections at their parishes were suffering. But those offertory collections already had been on a downward trend for years in many parishes, as the area's Catholic population steadily dwindled.

The bishop requires that parishes make annual payments called assessments to the diocese that amount to roughly a quarter of the overall offertory collections that come into each parish. Some parishes pay more or less depending on whether they operate a school.

Some pastors have expressed concerned for years that the diocese takes too much of the parish collection, leaving parishes hard pressed to run their ministries and pay other bills.