Most of the windows and balconies that would have overlooked a neighbor's backyard have been dropped from an apartment building planned for Buffalo's West Side.

But the neighbor, who complained that the balconies and windows would have allowed tenants to peer into their backyard, said the changes to the design of the 39-unit building aren't enough.

"We're opposed to the building in the first place," neighbor Eric Kempisty said, citing diminished quality of life and home value. "Who wants to be sandwiched between two large buildings?"

In response to the objections of Kempisty and his wife, Shelley, architect Akos Seres, working under the direction of property owner Anthony LoRusso of APL Property Group, redesigned the interior of the proposed 39-unit apartment building project at 129 West Ave. to eliminate any views from the tenants toward the Kempistys' home.

To accomplish that goal, Seres moved the building's stair tower and elevator from the corner to the center, on the side of the building facing the private home, so that part of the apartment complex is no longer living space. And the corner areas now have apartments instead.

Seres also moved one of two building entrances on the first floor to the back of the complex, in the parking lot, instead of along the fence line near the Kempisty house. The other entrance is in front, while the management office is now in a front corner.

"I have to give the architect an awful lot of credit," said attorney Marc Romanowski, of Hopkins Sorgi & Romanowski, who represents LoRusso.

The city Planning Board reviewed the changes April 9 but could not act because the proposal still needs two zoning variances for its height and for the height of a fence. The building is 43 feet, six inches tall, so it's within the 44-foot cap in the Green Code, but it has four floors because of the slope of the ground, so that's more than the three-story limit. The Zoning Board of Appeals will meet on April 17.

"The applicant has been very responsive to concerns about privacy in the yard," said Planning Board Vice Chair Cynthia Schwartz. "This is a much more dramatic change than we often see when these kinds of issues are raised, so kudos on that one."

Even so, despite the significant change, it wasn't enough for the Kempistys, whose single-family home at 115 West will be surrounded on three sides by two LoRusso-owned apartment buildings if the project is approved.

The building wraps around part of the Kempisty house, and is directly adjacent to LoRusso's Allentown Apartments at Maryland Place, a three-story building at 295 Maryland St., with 59 one- and two-bedroom units. That's already more than half-filled.

That will create parking and traffic concerns for the Kempistys and a neighbor across the street, they said, citing an inadequate number of onsite parking spaces planned for the project.

"If they're allowed to build this building, there are issues we do have," Eric Kempisty said. "We want to make sure it's as small as possible so it doesn't impact us negatively. Literally, you will block the sun out of the backyard of our home."

LoRusso, a former City Court judge who is now a real estate investor and developer, wants to build his new Campus West project on a long-vacant former industrial site that he purchased at a foreclosure auction and then cleaned up. The land had been used for many years as a storage facility by billboard and advertising company Lamar, and was empty when the Kempistys bought their property next door.

"We've been cooperating with the developer very much, and this is just too much," said Evan Campbell, also of West Avenue. "What we were hoping for was a nice green space to complement this other building. I respectfully oppose this project as it is designed."

"I'm not unsympathetic to your concerns. This is a pretty dramatic change from when you bought your property," Schwartz said. "I'm torn because this has been such a problematic site. It's been sitting there vacant for 20 years now." 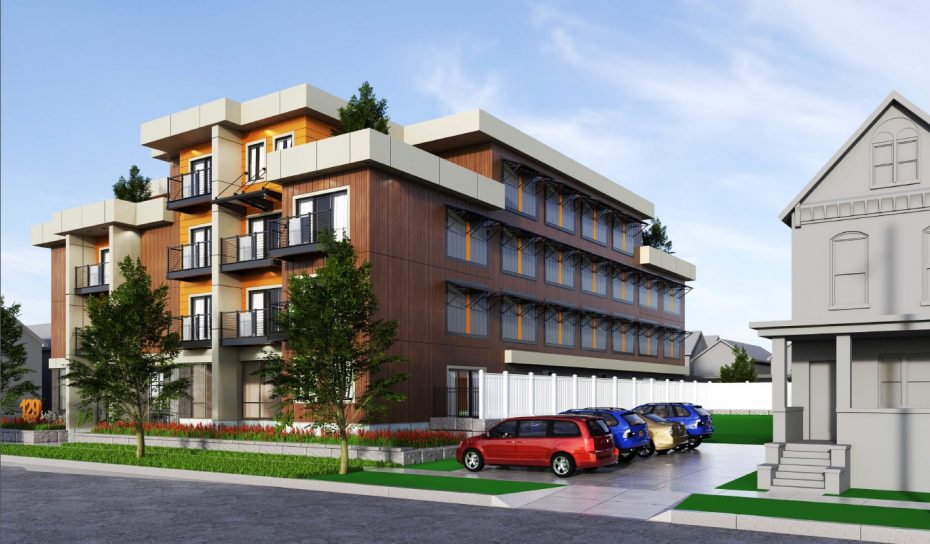 The neighbors next to Anthony LoRusso's proposed Campus West microapartment building object to being surrounded by two LoRusso projects.

The project would feature four floors of 550-square-foot, one-bedroom units aimed at moderate-income tenants. Each would have a patio or balcony, as well as a new style of wall-mounted Murphy beds to conserve space. The facade design will feature black, copper and wood-grain-colored metal panels. It would also include a full basement and about 1,000 square feet of first-floor community space for residents to use.

The project is not subsidized, but the units are designed to be small to keep the market-rate rents low and affordable. The proposed apartments are designed as "workforce housing" for employees on the Buffalo Niagara Medical Campus and other parts of nearby downtown Buffalo. The facility is also located just down the street from D'Youville College.

"We're at a different end of the market," Romanowski said. "It's really a product that the city hasn't done a lot of."

Romanowski insisted that there's enough parking spaces, based on an independent study and their confidence that many of the tenants will rely on public transit rather than personal vehicles. And he said that LoRusso needed a certain number of units in the building to make the project work financially, so he could either go up in height or spread it out over more of the project site, which could be worse.

But at least one Planning Board member agreed with the neighbors. "I don't like it, two big apartment buildings sandwiching this guy and his wife," said Horace Gioia. "I don't disagree that they've made some important changes, but I still have some trouble believing the no-parking impact."