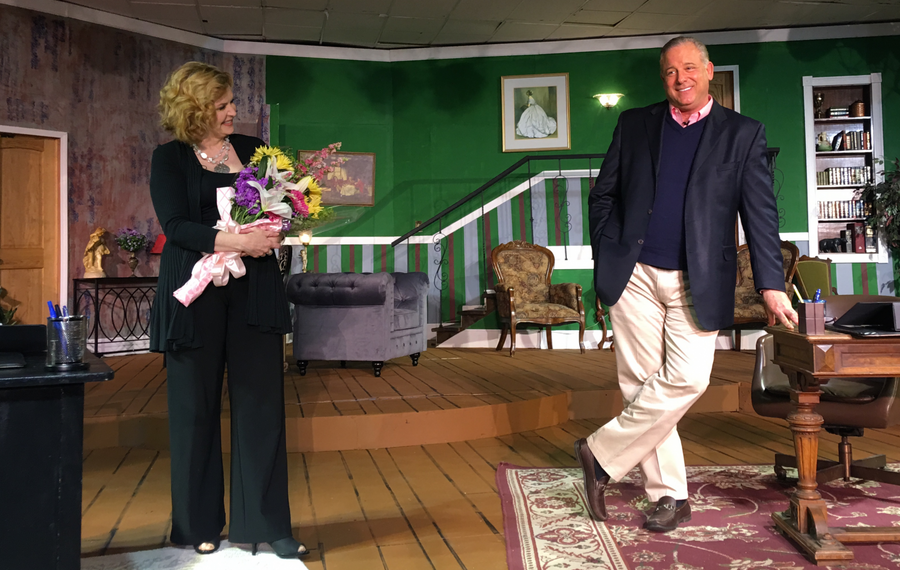 In 16 years together at WGRZ, co-anchors Maryalice Demler and Scott Levin have developed more than a bit of chemistry.

So it came as no surprise that when they took to the stage of the Ellicott Creek Playhouse Saturday night to appear in a fundraising performance of A.R. Gurney's "Love Letters," they inhabited their roles as effortlessly as if they were reading the evening news.

It was a surprise, though, that they delved into the material with such depth of feeling and easy humor, breathing new life into one of the most well-worn plays of the 20th century without the aid of a single rehearsal.

The duo appeared during Saturday's unseasonable ice storm on the invitation of the Niagara Regional Theatre Guild to raise money for, of all things, a new air-conditioner system. Though the crowd was sparser than the producers and performers would have liked, their enthusiasm made the theater feel like it was standing-room only.

Across two brisk acts, they earned every laugh and every sigh, reanimating a threadbare piece of writing and demonstrating that their innate trust and camaraderie as co-anchors has applications far beyond journalism.

"You can't make that relationship up," Levin said during a post-show question-and-answer session. "You just know what the other person is thinking. You trust them."

It is true that Gurney's epistolary play lends itself well to amateurs, even to bad amateurs. It's forgiving in a way that often makes it unforgivable, for the sorts of unbearable celebrity stunts it engenders – elected officials reading opposite society wives or PTA presidents, and the like.

But this is no such stunt, especially given Demler's considerable history on the stage and Levin's innate skill. Demler, though most of her viewers don't know it, appeared in more than 40 theater productions during high school. Many were with the Niagara Falls Little Theatre, the precursor to the Niagara Regional Theatre Guild. (Levin, for his part, appeared in a high school production of "1776" but has no other credits.)

Levin fully inhabits the skin of Gurney's pre-pressed, unprepossessing WASP archetype, the sort of oxford-wearing, rule-abiding personality who seems to have been born in a blazer. Despite the occasional glance over at his co-star (they're not supposed to look at one another), he imbues the character of Andy Ladd with a believable world-weariness and anxiety we can read as a clear reaction to the high expectations of his social class.

Demler, for her part, is more given to mugging in her role as the more defiant and slightly unhinged Melissa, of similar WASPitude but much freer spirit and possessed of preternatural smarm. This feels appropriate, and she earns plenty of laughs out of anachronistic lines such as "Nuts to you, Andy. And that goes double on Sunday."

She also knows exactly what she's doing when she reads Gurney's line about relying on Andy: "You're my anchorman these days," she says, taking a cheeky look at the audience to extract every last laugh.

At the end of this delightful evening, one man in the audience remarked he had seen a recent performance of the play featuring Ryan O'Neal and Ali MacGraw at Shea's 710 Theatre.

"You blew them out of the water," he said. And he was right.

If you can stomach another reading of "Love Letters," and really only the worst cynics can't, you won't regret getting a ticket to Sunday's matinee.