It would be Buffalo’s own “high line.”

The land conservancy on Tuesday will gather neighbors, community leaders and leading national experts at Buffalo’s Saturn Club for input.

Organizers said they want to use those successes to create a vision that’s unique to Buffalo.

“We don’t have to reinvent the wheel,” said Nancy Smith, the land conservancy’s executive director.

“There’s a palpable excitement for this,” Higgins said. “It’s finding its way into neighborhoods.”

He added: “This is taking the Buffalo waterfront development to the next level.”

The proposed linear nature park would run along the former Delaware, Lackawanna and Western Railroad corridor.

It starts east of Michigan Avenue behind the Swannie House, runs along Miami Street through the Old First Ward, extends into the Valley near Red Jacket Park and ends at a half-bridge over the Buffalo River overlooking Tesla’s new solar panel plant on South Park Avenue.

Heidinger and Larkin Development Group’s Leslie Zemsky will be flanked by Tom Woiwode, director of the GreenWays Initiative in the Detroit area, and Steve Apfelbaum who founded the Applied Ecological Services environmental design firm.

Like the land conservancy’s past listening sessions on the topic, this one won’t be a one-way discussion, Smith said.

The community is encouraged to participate.

“We’re inviting everyone to come and help shape the vision,” Smith said.

"Creating a greenway is about more than biking and walking paths, it's about providing an opportunity for people to come together and think differently about their neighborhoods, their relationship to their community and neighborhood revitalization," Woiwode said in a statement.

So far, a few of the concepts that have emerged in neighborhood focus groups and a January public meeting included:

• a walking and bicycle trail connecting Buffalo’s First Ward, Perry and Valley neighborhoods with Canalside.
• integrating wildflowers, native plants and trees along the elevated berm to promote pollinators and wildlife habitat.
• using parts of the trail as a space for public art.
• installing interpretive signage detailing the history of the Buffalo River, Native Americans, industry, railroads and its neighborhoods.
• creating a viewing area for rail buffs overlooking one of the busiest active railroad lines in Buffalo. 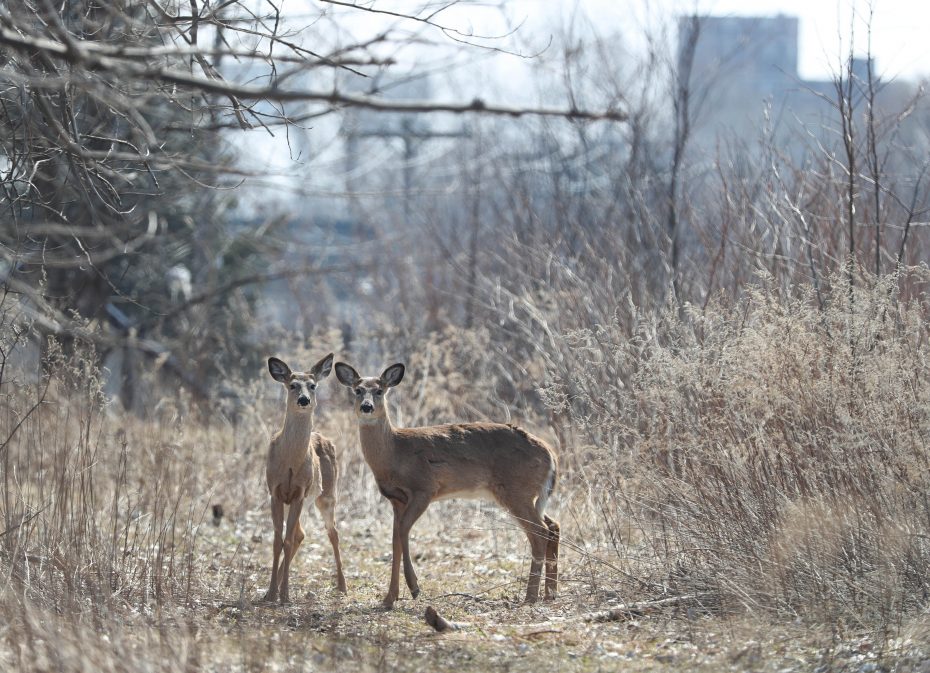 Deer and other wildlife frequent the elevated berm along the old DL&W railroad berm in the area off Alabama Street between Miami and Mackinaw streets. (Sharon Cantillon/Buffalo News)

Tuesday will mark another opportunity for a community brainstorming session about the project. Community engagement will continue into the future, Smith said.

“Now, we take everything we’ve gathered and put it together into a written document,” Smith said. “It will be ‘this is our vision.’ ”

Smith said the vision document will be completed over the next two months in time to launch what’s expected to be a 1½-years-long design competition in July.

When that's finished, the land conservancy will seek a designer to create a more detailed project design. 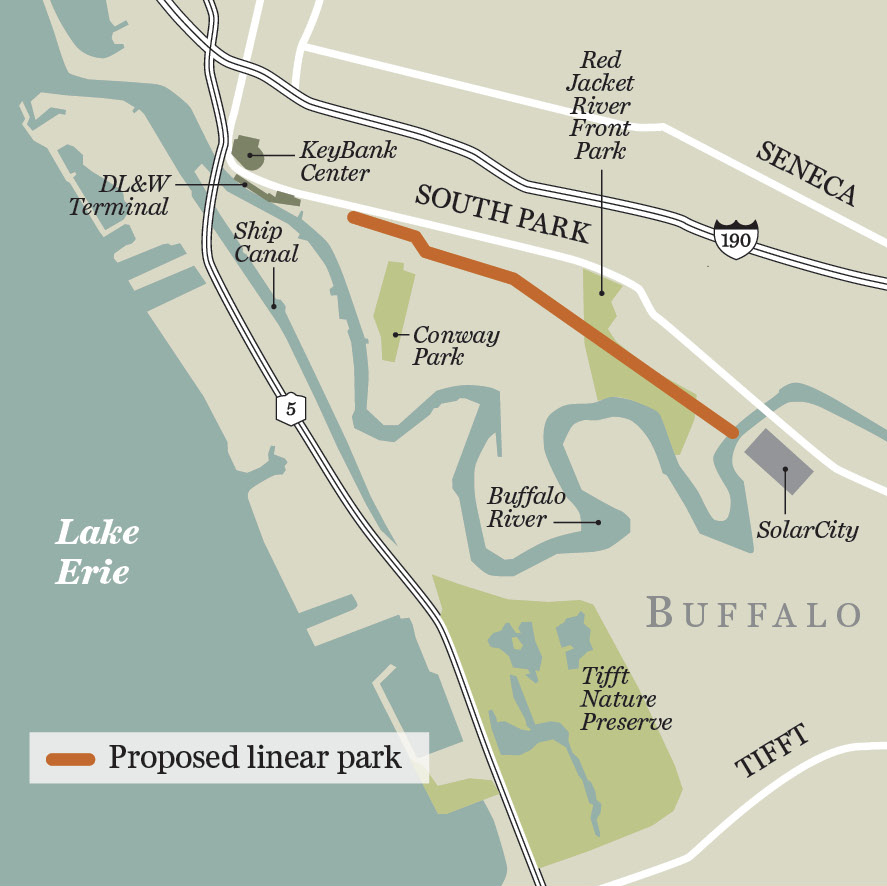 Then, after designs are finalized, construction.

And what about the money to pay for it?

Higgins estimates the design and construction costs in the $12 million to $15 million range. He said several state and federal funding sources suit projects just like this one.

And, Higgins said there are still tens of millions of dollars available through the pool of funding from the Niagara Power Authority’s relicensing agreement.

“This project is the exact sort of project that was envisioned when that money was secured in 2006,” Higgins said.

The half bridge overlooking the Buffalo River and Solar City would be the terminus of the proposed linear park that would begin just southeast of Michigan and South Park avenues. (Sharon Cantillon/Buffalo News)

Heidinger, the owner of Undergrounds Cafe on South Park Avenue and president of the Old First Ward Community Center, said the community involvement – and its vision – is what’s resonated with her so far.

It’ll be a signature project for the neighborhoods, devised right from the ideas of the neighbors.

“We’re a tough bunch, and most of the feedback has been positive,” Heidinger said. “It’s refreshing to be part of a really, really thoughtful process.”