So, when the wayward 26-year-old walked into Sweet_ness 7 Café on Grant Street one day in 2013, he told owner Prish Moran he was willing to perform any task she required.

"What are your strengths?" Moran asked Twiss during their first encounter.

"Well, I hate people," he replied.

They both broke down laughing.

And just like that, one of the most remarkable artist-patron relationships in 21st-century Buffalo was born.

Neither of them knew it that day, but Moran and Twiss' friendship would later blossom into the Tabernacle, Buffalo's own unlikely, low-budget version of the Sistine Chapel. The space, which the now-31-year-old untrained artist spent a year decorating with large-scale murals in a remarkable variety of styles and techniques in near-solitude, is slated to open in the next few weeks.

Back on that day in 2013, impressed by his brutal honesty and the proverbial cut of his jib, Moran hired Twiss on the spot to work in the café's open kitchen.

As a quick-tempered cook prone to arguments with café staff and generally disdainful of authority, Twiss was not exactly a hit with his coworkers. Most café owners, after a few years of dustups and flared tempers, would have let him go.

Not Moran. Always on the lookout for a staff she treats more as her own children than her employees, she hatched an idea better suited to Twiss' personality and talents.

"Jeremy had reached a pinnacle of stress with what happens in a busy, busy coffee shop," she said. So she asked him to help her paint the building she had purchased next door to the café; she planned to convert it into a bar and restaurant space catering to Grant Street's diverse, bohemian neighborhood.

"He kind of looked at me, and he goes, 'I can't paint. I don't know how to paint. And I  said, 'Yes, you can. You've got to do something. You can't keep driving everyone crazy out there."

As it turns out? The kid can definitely paint. 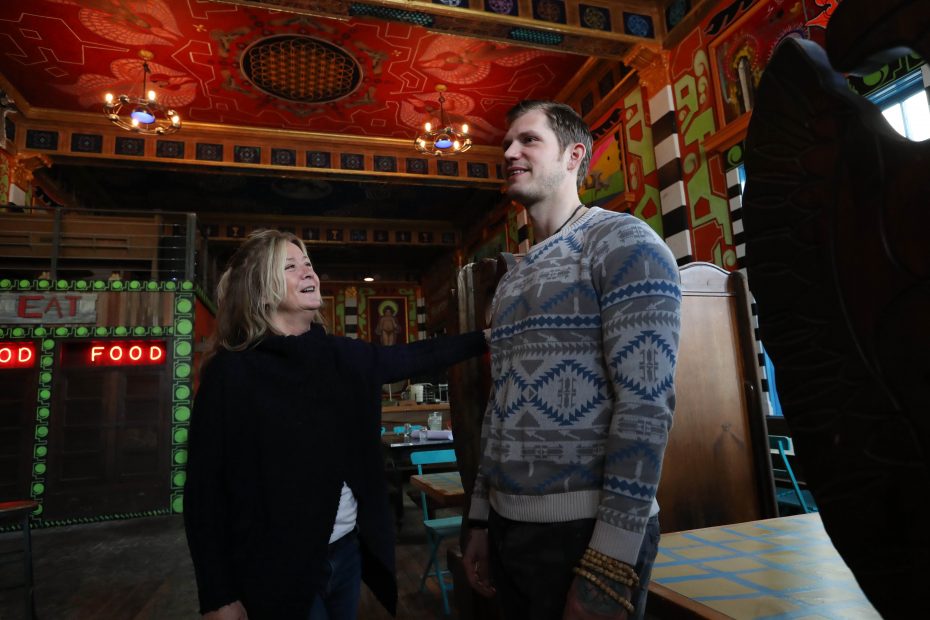 The Tabernacle, Twiss' artistic masterpiece housed in a former house of worship on Lafayette Avenue, is a breathing marvel of creativity unlike any other art installation or public art project in Western New York.

Its sprawling murals and decorative flourishes, painted in a remarkable variety of colors and styles over the course of a year, cover every inch of the walls and ceilings.

The whole color-drenched landscape is punctuated and connected by networks of fluorescent graffiti borrowed from the language of the street. It is infused here and there with spontaneous phrases like "NOTHING IS PERFECT" and "tsk, tsk," each one hinting at the artist's insecurities about his own talent and his anxious state of mind. 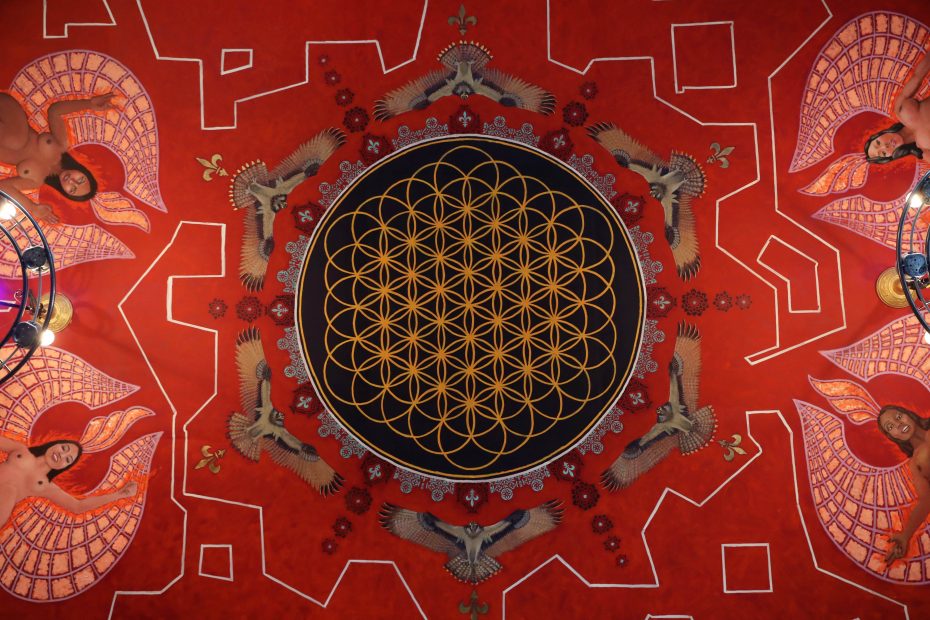 A ceiling panel in the Tabernacle, a new bar and restaurant on Grant Street, features a mandala-inspired design accented by illustrated figures. (Sharon Cantillon/Buffalo News)

"I understand now why so many painters go crazy," Twiss said on a recent afternoon in the space, as the sound of an electric sander seeped in from the other room. "There were days where I would be so focused that I would start to not really know what was real."

The psychedelic tone of the project bears this out.

The challenge was complicated, Moran and Twiss said, by the extraordinarily difficult conditions under which the work was created. The unheated space was bone-chillingly cold in the winter and unbearably hot in the summer. Twiss suffered through it all, spending long nights on rickety scaffolding he sometimes feared would collapse and navigating around furniture and equipment from Moran's former bar and restaurant on Parkside Avenue.

"There were plenty of times where I'd work myself to death for 15 hours straight, and then I couldn't move the next day," Twiss said.

The resulting artwork, which echoes with ideas transposed from pop culture, religious traditions and philosophy, is like walking directly into Twiss' hyperactive brain.

"I think it's incredible," said Steve Zaionz, a cook and manager at Sweet_ness 7. "It was fun to see him teach himself how to paint as he was working. He improved drastically over a very short period of time, I think, because he was working so constantly." 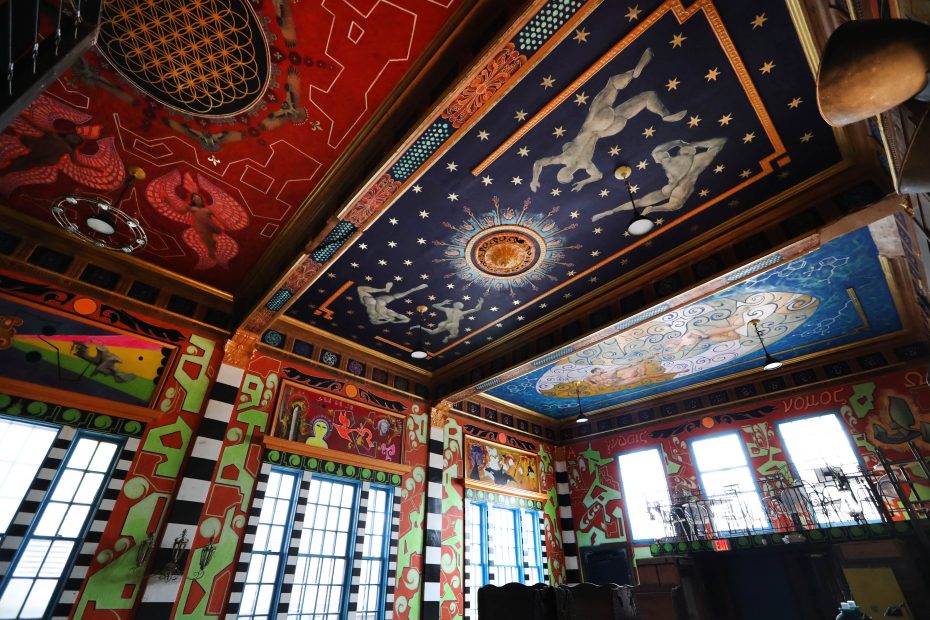 Jeremy Twiss' paintings in the Tabernacle feature an enormous range of styles and influences, from Renaissance figures to street art. (Sharon Cantillon/Buffalo News)

Twiss grew up in Lackawanna and West Seneca in what he called a "fundamentalist Christian" household. He studied philosophy at the University of South Florida for a short time before moving back to Buffalo and later did a stint in the comparative literature program at the University at Buffalo before dropping out for lack of money.

Though he was interested in art from the time he was in middle school and was fond of drawing, he had never made any attempts at painting as an adult and pursued philosophy instead.

For Twiss, the works of Spinoza, Nietzsche, Kant and Heidegger were places where he could get lost in ideas and ask the deep questions that had preoccupied him since he was a child. He still regularly reads philosophy.

"I was raised religiously and I started asking questions," he said, "and I realized that philosophy was the place where you go to ask questions and sort out your mind a bit, and then have your mind unsorted."

But art, as Twiss learned over the last year, serves that purpose just as well.

"I love being in here," Twiss said. "I've heard actors say, 'Oh, I never watch my own movies.' But I sit in here, and I think about every little thing that I was thinking about when I was painting. All the weird memories, and the pain, and the nice points, too.

"There's just so much embedded in here, and it was where I found a lot of pieces of myself that I had forgotten or that I didn't know I had."

Every panel in the space tells its own strange story, from the famous Michelangelo panel he adapted for the entrance way to a smaller wall painting featuring a sumo wrestler and penguin floating against an impressionistic backdrop out of Monet next to an illustration of Alaska and repeated renderings of the Japanese archipelago.

Another panel, Twiss explained, features a figure designed as a combination of Anakin Skywalker of "Star Wars" fame, Julius Caesar, Jesus Christ and Paul Muad'Dib from the "Dune" series. He's holding a large green lightsaber against a desert landscape (also inspired by "Dune") as a Buddha figure calmly leads a skeletal velociraptor to the edge of the frame.

Float your cursor in the lower left of this image to hear Jeremy Twiss explain one of his favorite panels:

This panel, one of Twiss' favorite, is designed as a complex narrative about the application of great power to peaceful ends, like art.

The goal, he said, was to mimic the experience of entering a great cathedral.

"Seeing the form, seeing the geometry, seeing the flying buttresses, seeing all the stained glass: That is what activates so much in a human," he said. "You see all this compounded effort pressed into this relatively small space. I realized that if you want something to be all mystical and psychedelic and crazy, you've got to pour everything into it."

'Difference between joy and happiness'

By his own accounting, Twiss admits his skills aren't as developed as he'd like.

"There are thousands of artists out there who are way more technically proficient than I am," he said. "In my head, I want to be like that one day. It's crazy and unrealistic for me to think that I could have started out that way and that could have been the product here. But nobody thinks that this is terrible so far."

Nor, aside from those who tend to reflexively dismiss "outsider art," are many likely to think so.

Moran, who had faith in Twiss from the moment they first spoke, agrees.

"To see someone that I love, who has worked for me for so long, just the personal happiness and the growth that was right in front of my eyes?" she said. "He's not my child, but I had that same feeling."

Though the process was extraordinarily difficult, Twiss called it the greatest accomplishment of his life.

"It's the difference between joy and happiness," he said in response to a question about sacrificing his sanity, sleep and friendships in order to complete the work. "Joy can be a deep, solemn thing. It's not necessarily smiles and rainbows. Joy is like, you're content and you're resolute and there's an underlying warmth. Even though there might be this horrible storminess going on, you're still there, and you're doing it, and you haven't lost."

5 things to know about the Tabernacle, Buffalo’s newest art destination