Like a drive-in theater, a roller rink is something to treasure. Especially an old-time roller rink, with a genuine wooden floor.

Such a paradise is the Rainbow Rink in North Tonawanda.

It was opened in 1949 by two couples, Elmer and Mary Batt and Herbert and Ella Bale. It is currently owned by the Bales' grandson, Maurice Cooper, along with his wife and son. They also own Rainbow Skateland in Lockport.

How lucky we are. Roller rinks were big in the '30s and '40s, and had their last heyday in the '70s, when they were fueled by disco. Since then, most rinks have disappeared, falling victim to modern times and modern pastimes. But roller skating might just be once again picking up speed. On a recent Monday night, the Rainbow Rink was rocking -- and rolling.

Skating is as simple as it always was. Pay your admission at the booth, get a ticket for skate rental if you don't have your own, and walk in.

The skates are smooth, comfortable, traditional. Find a pair that fits right -- the kids at the counter will help -- and sit down on a bench to lace them on. If you haven't skated for years -- I hadn't -- you might be a bit wobbly as you make your way to the coin lockers.

Roll out onto that gorgeous wooden floor.

I loved the feel of it, the texture of the boards beneath the skates. That is, I appreciated all this after I got my footing.

There is what seems to be a beginner's rink next to the main rink, where you can learn. There are also training devices that look like walkers on wheels, for big and little first-timers. I didn't notice those amenities when I could have used them.

Struggling, I remembered the secrets to skating I had learned as a kid: lean forward, relax, and glide on one foot, then the other. Luckily, it was shortly after 5 p.m., skating had just started, and there were only a few other folks in the rink. Very soon, to my surprise, I was skating with confidence.

It was like turning back the calendar. The music was a little different from when I was a kid -- but not that different. Also, I saw no smartphones. OK, there was one girl skating and holding an iPhone in front of her face. But she kept falling.

To be fair, a lot of people were falling. Little kids fell, and their friends fell with them in solidarity. A petite woman we learned had not skated in 50 years also took a tumble. Strangers rushed to help her back to her feet and give her pointers. One gentleman was trying something fancy and fell. Without a word, he slapped the floor in frustration, shook his head, and got back up.

At 7 p.m. -- had two hours really passed? -- a light show began. They bathed the rink in black lights and lavender. Four separate people told me how cool my sweater looked under the black lights. I was glowing. It was as if I were 14 again. 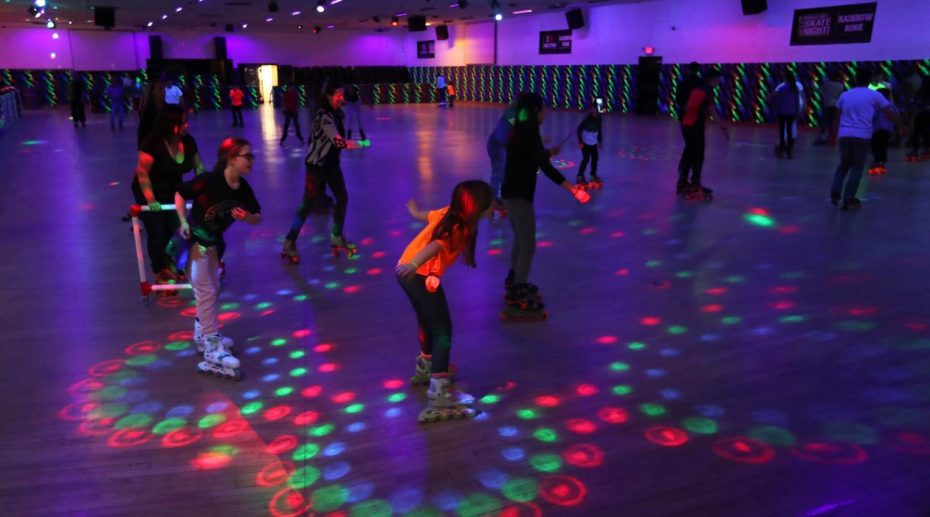 Everyone looked blissful. I got talking with a man named Mark McVay who, circling the rink, was as graceful as Astaire. I can't quote his exact words because I haven't yet mastered the art of writing while I'm skating. But he said he had bought his skates at Skate 98, a Batavia rink, while he was in high school.

Always a fine skater, he kept at it. Then life got in the way, Skate 98 burned, and for years, his skates gathered dust. Until just a few weeks ago, when he encountered Rainbow Rink. Now he drives in from Batavia several times a week. He was planning to bring his grandchildren.

I was going to come back, too, I admitted. He laughed.

"You haven't stopped smiling since you got here," he said. 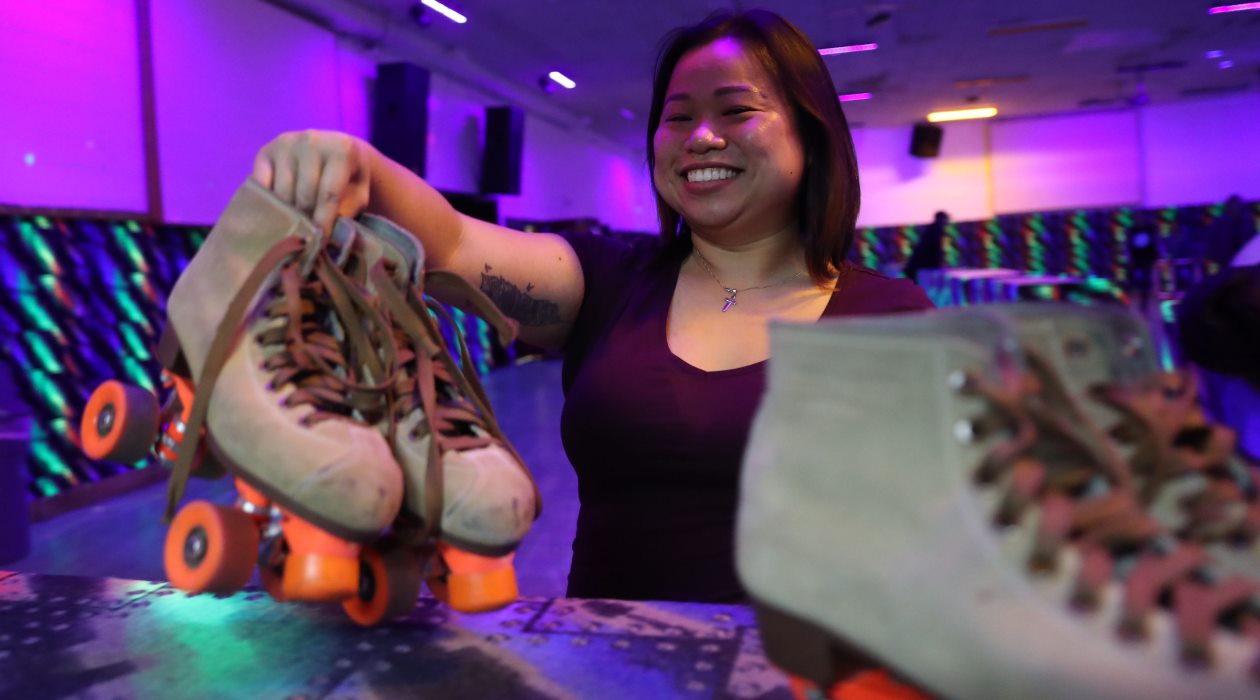 Hours: Vary by day of week.

Cost: Generally $6; skate rental $3. Sometimes it is a little less, sometimes a little more, depending on the event.

Tip: Rainbow Rink has a tradition of weekly Learn to Skate classes, with certified instructors. The rink also has regular theme nights, including Adult Retro Skate (8 p.m. Wednesdays), 25-and-over Night with a deejay and adult beverages (8 p.m. Sundays) and Christian music night (the first Monday of the month).