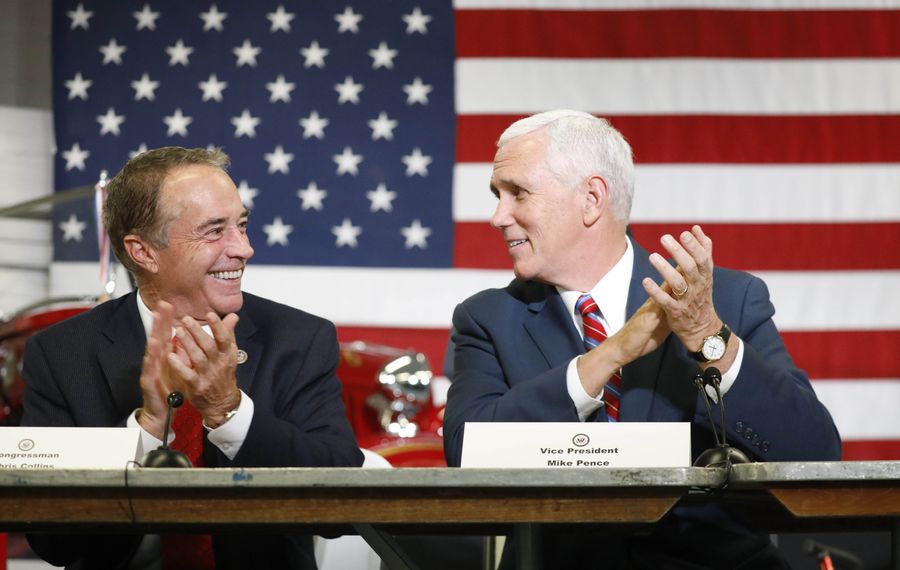 WASHINGTON – Rep. Chris Collins had $1.22 million in his campaign war chest after winning re-election by 34 points in November 2016.

Then on Nov. 29 of that year, Collins, a Clarence Republican, put $500,000 of that money back in his own pocket. Collins lent his campaign $500,000 before he first won election to Congress in 2012, and four years later, he finally paid himself back.

And after he paid himself back, Collins ramped up his campaign fundraising efforts to replenish the campaign coffers he had just depleted.

Campaign finance experts stress that Collins's loans to his campaign, and their eventual repayment, are perfectly legal.

But they also said that as he increased his fundraising, an unusually large share of the money he raised came from the health care industry – which has a stake in Collins' work on a congressional subcommittee that legislates on health care issues.

"They see him as someone who will carry their water," said Craig Holman of Public Citizen's Congress Watch, a government watchdog group. "So they are doling out wads of cash to him."

Collins, a self-made millionaire, has been putting his own money into to his campaigns since his first race for Congress in 1998. He lent money to his campaign when he ran for Erie County executive in 2007, and again when he challenged and defeated then-Rep. Kathy Hochul, a Democrat, in 2012.

A closer look at the allegations lodged against Collins

He's always paid back the loans he made to his campaign committee, but this time he waited a long time to do so. Asked why Collins chose to pay himself back in late 2016, Collins' political adviser, Christopher M. Grant, said: "It was four years, almost five years after he lent it to the campaign in the first place, so he felt the time was best to repay the loan."

Federal disclosure documents show that Collins paid off the loan at a time when he was engaged in a series of big-money business transactions like those he has continued to make since joining Congress. Federal records show he has made big investments in real estate and other business ventures continually since he entered Congress. He made 15 such deals in 2013, five the following year, eight in 2015 and nine in 2016.

Included in those 2016 deals was the purchase of at least $500,000 in stock in Innate Immunotherapeutics, an Australian biotech firm in which Collins has long been the largest investor. An Office of Congressional Ethics report last year said Collins appeared to have engaged in a form of insider trading in recommending that stock to others, and the House Ethics Committee is continuing to probe Collins' relationship with Innate.

Asked if there was any business reason why Collins repaid the loan when he did, Grant noted that Collins had been an active investor all through his years in Congress. In fact, federal records show he's reported 41 different major investment transactions since joining Congress in January 2013.

Given Collins' record as a consistent investor, Grant said:  "It is kind of a leap to connect the payment of the loan to anything else."

House candidates rarely lend money to their own campaigns, and when they do, they usually quickly repay the loans if they win election, said Sheila Krumholz, executive director of the Center for Responsive Politics, which monitors campaign finance and lobbying.

And while Grant has said Collins devotes 100 hours of work to his job as congressman for every hour he spends on his business interests, Krumholz said that when lawmakers have as many active investments as Collins does, "you have to wonder what other business they're not tending to."

That being the case, what Collins did "does not run afoul of the rules," said Michael Beckel, research manager for Issue One, a Washington nonprofit dedicated to government ethics.

It doesn't appear that Collins ran afoul of any rules in his 2017 fundraising push, either. But there's no doubt that he intensified his fundraising efforts last year.

By doing so, he refilled his campaign account. He had $699,177 on hand after paying back that loan to himself, but thanks to his efforts in 2017, his campaign war chest was back up to $1.18 million by the end of the year.

Collins – whom Democrats are targeting for defeat this fall – replenished his campaign kitty in several ways.

He held nine D.C. fundraisers between mid-May and the end of June.

Then, in October, Vice President Mike Pence traveled to Buffalo for a fundraiser for the Collins Victory Fund. That's the lawmaker's joint fundraising committee, which benefits Collins' campaign, his own personal political action committee and the National Republican Congressional Committee.

The Collins Victory Fund raised 96 percent of its money from individuals, and its list of donors reads like a who's who of top local Republicans. Local developer Carl P. Paladino gave the Collins Victory Fund $20,000. Other donors included former Assemblywoman Jane Corwin, Jeremy M. Jacobs Jr. of Delaware North Cos. and businessman and longtime GOP fundraiser Anthony Gioia.

In contrast, the Collins campaign got 52 percent of its donations from political action committees, with the largest amount – $123,930 – coming from the health care industry, according to CQ Roll Call's Political MoneyLine, which analyzes campaign finance data.

"The reason health care interests are supportive of Chris is because, one, he advances policies that make health care better for working families across New York's 27th district and across the country, including the repeal of Obamacare," Grant said.

"Two, Chris is one of the few members of Congress who intuitively understands health care from the business angle," Grant added. "He knows biotechnology companies, and so they are attracted to his expertise. They know that when they're talking to him, they've got an advocate that understands the policy at a level different than other members of Congress, and so they can work with him. And he's advancing policies that are helping working families, and that's what they want to do, so this is a good place for them to invest their money."

But she and Holman both noted that Collins' expertise in health care comes in part from a troublesome source: his involvement in  Innate Immunotherapeutics. House investigators are looking into charges that Collins gave insider information about Innate to potential investors, and that he advocated for the company before the National Institutes of Health.

Voters ought to be able to easily review how lawmakers such as Collins are investing, which is why the Center for Responsive Politics is digitizing those records, Krumholz said.

"Innate Immunotherapeutics is Exhibit A of why this matters," Krumholz said.