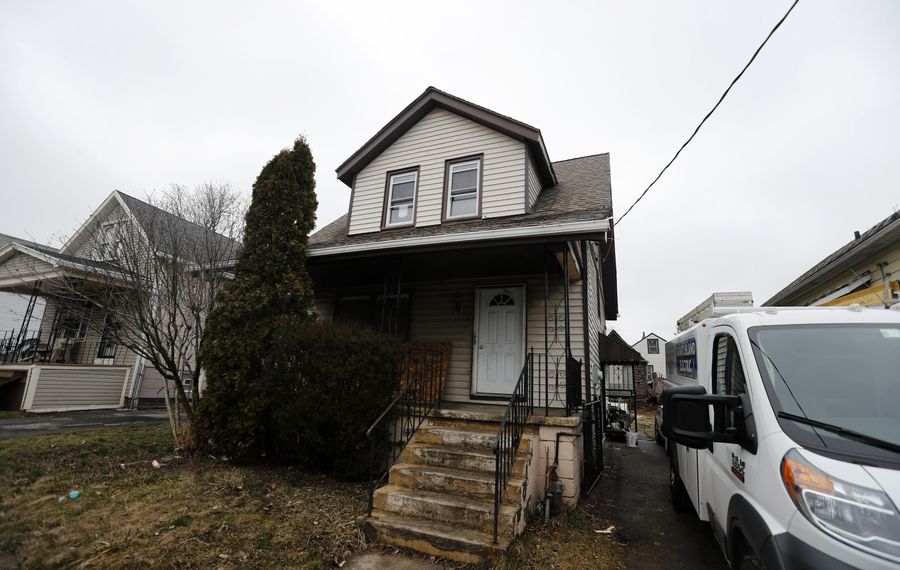 Hefty price tags on a housing rehab program in Buffalo are prompting city officials to look for ways to do more with less.

Concerned that the Buffalo Urban Renewal Agency has been paying upwards of $500,000 to fix some of the city's most dilapidated vacant houses – and then selling them for far less – the Brown administration is developing a new plan that starts with obtaining vacant properties before they get too run-down. It will also likely include helping prospective homeowners get financing to purchase and rehab houses.

The plan is also expected to include a Habitat for Humanity component.

Buffalo has been developing the program in response to the high cost of its federally funded housing rehabs, according to Brendan R. Mehaffy, executive director of the city's Office of Strategic Planning and vice-chairman of the Buffalo Urban Renewal Agency.

City officials blamed federal rules and restrictions for driving up the cost, but The News found the size and dilapidated condition of the vacant houses chosen for rehab were also factors.

City officials aren't expected to announce their new plan until details are worked out in coming weeks, but Mayor Byron W. Brown sketched out a program in his State of the City speech in February aimed at encouraging home ownership of Buffalo's abandoned properties.

The city, Brown said in his speech, is working on a program along with several state organizations – Empire State Development, the New York State Affordable Housing Corp., and the State of New York Mortgage Agency – as well as M&T Bank and Habitat for Humanity.

Abandoned houses – singles and doubles – sold by the city will be eligible for a new type of mortgage from SONYMA that will include the cost of purchase and rehabilitation. When rehab costs exceed the amount of the mortgage, grants will be available from the state to cover the difference, Brown said.

The mayor did not provide further details on the SONYMA home buyer rehab program, but one used in Rochester offers qualifying home buyers up to $55,000 in grant money to help fix up newly purchased vacant houses they promise to live in for 10 years. The funds include $20,000 from SONYMA and another $35,000 from the Greater Rochester Housing Partnership, a nonprofit organization that partners with the City of Rochester on affordable housing projects. Participants must qualify for a SONYMA mortgage.

Buffalo, over the past year, has been acquiring dozens of houses from its foreclosure list for a new rehab program.

The process started after the State Legislature in late 2016 agreed to let the region's land bank, formally known as the Buffalo Erie Niagara Land Improvement Corp., use its powers to acquire foreclosed properties on behalf of the City of Buffalo without having to bid during the foreclosure auction.

Over the past year or so, ever since the land bank was authorized to obtain properties for the city, Buffalo has been reviewing foreclosures for vacant houses owned by investors that the city is interested in acquiring for various city programs, including rehab.

The homebuyer-rehab model Buffalo is developing appears to be a version of  – or perhaps a hybrid of – a technique already used in Rochester and Syracuse, as well as by the Buffalo region's land bank. The region's land bank, known as the Buffalo Erie Niagara Land Improvement Corp., is chaired by Mehaffy, who helped found the organization.

Mehaffy in recent weeks visited Rochester and Syracuse to learn more about their affordable housing rehab programs. Those cities spend less than half as much per rehab as Buffalo, generally because the houses they fix up are much smaller and less dilapidated, The News found. The regional land bank in the Buffalo area also does less costly rehabs than the Buffalo Urban Renewal Agency does.

Housing officials in Syracuse and Rochester, as well as at the regional land bank in Buffalo, all said they view their home buyer-rehab programs as one method in their larger toolbox for fixing as many houses as possible given limited financial resources.

It's likely Buffalo's new homebuyer-rehab program will be one of several tools the city develops for fixing up dilapidated houses.

In his State of the  City speech, Brown also spoke of bringing Habitat for Humanity in to help rehab houses when the cost is too large for the SONYMA program.

"Those properties with the greatest rehab challenges will be tackled by Habitat for Humanity, ensuring that local homeowners will benefit from their investments," Brown said.

In addition, Mehaffy said the city is not ruling out using its existing federally funded rehab program if a property viewed as key to a neighborhood's stability or revitalization is identified and needs "deep subsidies."

Generally, Mehaffy wants to avoid using federal rehab money whenever possible because, he says, it increases costs and reduces flexibility.

When federal money is used, he said, environmental regulations covering such things as lead and asbestos removal are ratcheted up. In addition, there are deadlines that make it difficult to change course on a project, and hiring restrictions that can increase contractor fees.

The regional land bank in the Buffalo area isn't using federal funds. Most of its money so far has come from the state Attorney General's Office, which has funded land banks statewide with proceeds from bank settlements tied to the past housing crisis. The land bank doesn't use federal money to avoid the restrictions such money carries, said land bank executive director Jocelyn Gordon.

"We want to have flexibility," she said.

The regional land bank currently has its own version of a home buyer-rehab program in which the agency cleans up properties it acquires, then sells them to home buyers to rehab with private funds.

The land bank has worked on seven houses using this method in the past year, including one in Buffalo, at 44 Sandrock Road in Riverside, according to Benjamin J. Brown, the land bank's assistant program coordinator.  The agency, he said, checks on the progress several times a year to ensure the rehab work is being done. All seven houses are progressing, he said.

The agency acquired the vacant house on Sandrock Road at a city foreclosure sale. After investing $12,500 to clean the house up, it was sold in late 2017 to a local investor who promised to rehab the 2,100-square-foot, two-family house within a year. The sales price was $21,000 on a street where a neighboring two-family house had recently sold for $80,000, according to real estate data. The house needs about $46,000 in rehab work, the land bank estimates. Under the land bank program, the home buyer is responsible for obtaining his or her own rehab financing.

Fraction of the cost

The program is just one method the land bank uses to rehab vacant houses with a fraction of the money the Buffalo Urban Renewal Agency spends to renovate houses.

The land bank, for example, is currently doing a complete rehab of a small, vacant house at 107 Longview Ave., between Northland  and East Delavan avenues. Total rehabilitation of the 900-square-foot house is pegged at about $100,000.

But the exterior of the house is in decent shape, with a recent roof, windows, and vinyl siding installed by the prior owners, according to land bank documents. Because of that, the rehabilitation project made financial sense, said Gordon.

Like most city rehabs undertaken by the land bank as well as Buffalo and other upstate cities, the Longview house will nonetheless cost more to rehab than it will likely sell for. Most houses on Longview sell for under $50,000, according to state real estate sales records.  Land bank officials, however, say there is currently one listed for $69,000 with fewer amenities than at 107 Longview.

Such rehabs are viewed as an investment in the community, but also illustrate why the land bank has to use its money carefully, Gordon said.

That's why, Gordon said, the land bank recently spent $136,675 rehabbing an 1,100-square-foot house on Schauf Avenue, around the corner from Longview, but opted not to finish off the attic.

"We cleaned it out, and it's ready to be finished, but we did not finish the second floor," she said of the attic."We did what we thought was financially a good idea." 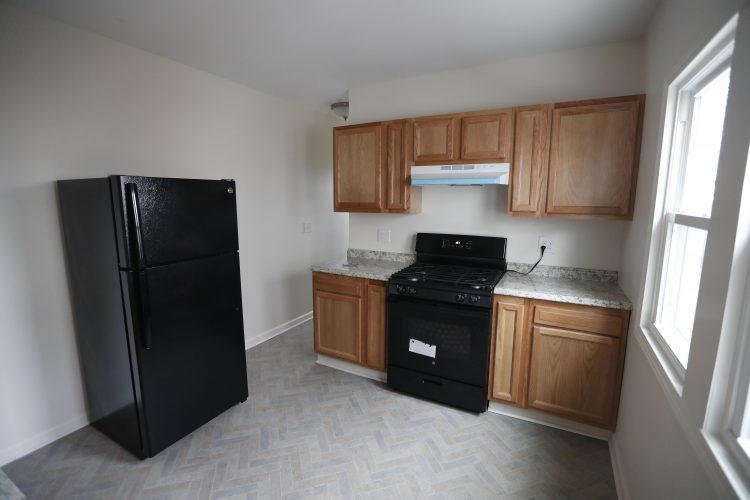 The house recently sold for $55,000. The new owner obtained a mortgage/rehab loan so she can finish the attic, adding another bedroom and bathroom to the house, Gordon said.  The rehab work  is expected to cost another $23,000.

The Rochester and Syracuse housing agencies also use a combination of programs to rehab houses, including a version of the home buyers-rehab program Buffalo is now talking about.

The Rochester program, tied in with SONYMA, covers vacant one- to four-family houses. Buyers find their own properties, then work with the Greater Rochester Housing Partnership. The buyers do not have to be first-time homeowners, but must intend to live in the houses. The Rochester housing group also writes the scope of work with the buyer, bids the work out, and follows up to ensure construction is completed in an agreed upon time frame, said Theodora Finn, president of the Greater Rochester Housing Partnership.

Syracuse does not offer a SONYMA rehab program, but offers a home buyer-rehab program though its land bank.

Land bank staff members evaluate the property, clean the house up and put together a detailed list of the work needed on the house along with a cost estimate, said Katelyn Wright, executive director of the Greater Syracuse Land Bank. The program is open to investors as well as owner-occupants, she said.

The home buyer-rehab program is good to have, but can be problematic if it turns out the house needs more work than initially determined, said Kerry Quaglia, chief executive officer at HOME HeadQuarters in Syracuse, which works with the land bank.

"It's one tool in the tool box," Quaglia said.