There was perhaps the most epic (if not the longest) Section VI championship game in playoff history.

That was a fun run to watch.

This one is a no-brainer.

It came courtesy of Hutchins and was the last basket of the season for any team in the state no less.

Hutchins completed Park's comeback from a five-point deficit by scoring all the points in an 8-1 blitz during the final 1:48 of the Federation final. The junior point guard began it with a steal leading to the first of consecutive traditional three-point plays. He capped the run with a championship-clinching basket that goes down as a great hustle play and a reminder of the importance of fundamentals. He followed his shot and rewarded the Pioneers with an unforgettable moment.

"All year long he finds people," Pioneers coach Rich Jacob said. "He's unselfish. He knew that we needed him and when it was time, he delivered in the scoring end."

Ten years from now, 7,000 folks will claim to have been among the capacity crowd of 3,500 in the arena March 3. It's understandable since that Section VI Class A-1 final was perhaps one of the most entertaining and drama-filled high school games ever played in the facility.

The teams answered the question of what would it be like if a high school game went a full 48 minutes like an NBA contest. They combined for 192 points. Let's not forget that the two biggest stars in the game, Greg Dolan and Juston Johnson, shined.

Dolan put up 36 points, 10 assists, seven rebounds, three steals and two blocks before fouling out with his team leading in the fourth overtime. His absence opened the door for West to erase a four-point deficit with Johnson scoring six of his game-high 38 points during the final 66 seconds.

With Dolan, who surpassed 2,000 career points during the game, on the bench as a spectator, the Indians' press finally forced South into the kind of costly mistake West feasted on throughout a 24-1 season. Alex Wayland made a steal after the inbounds and fed a wide-open Johnson for the go-ahead 3-pointer. Johnson also had 10 rebounds and four assists.

West breathed a sigh of relief for good after Devin Degree's 3 for the win, seemingly on target for South, caromed off the iron instead of through the hoop as time expired. That ending added to South's frustration as the Billies had final possessions in the fourth quarter and each of the overtime periods.

Franklinville was 6.1 seconds and an improbable step-back 3-pointer away from winning a state championship. Instead, Delaware Academy made the tying 3 at the regulation buzzer and beat the Panthers in overtime, 54-51.

Danielle Haskell, who was the best player on the court and finished with a game-high 33 points, had three shots in the last 34 seconds to tie it and possibly send the NYSPHSAA Class D final into another extra period. To no avail. Franklinville's first loss of the season ended up as its only one.

* Fredonia rallied late to upset Southwestern for Class B title;

* Southwestern came back to beat Wilson in Class B-2 final.

Kam Briggs of Health Sciences during the fourth quarter of the Falcons' Far West Regional win over Greece Odyssey. It had nothing to do with feats of physicality. It had everything to do with smarts. With Health Sciences trying to milk the clock, Briggs had a wide-open look from the right wing with 2:45 left. After briefly hesitating since it was early in the possession, the junior let it fly and buried the trey that all but slammed the door on Greece Odyssey. The Falcons triumphed 52-46.

* Niagara Catholic freshman Jalen Bradberry's 3-pointer in transition with three seconds left found nothing but net and sent the New York State Catholic Class B final into overtime tied at 55-55. Catholic fell to Regis of New York City in OT.

* Johnson for 3 and the lead in West Seneca West's comeback win over Will South in the aforementioned four-OT game.

Danielle Haskell banked in a roughly 25-foot jumper at the end of the third quarter of Franklinville's NYSPHSAA Class D semifinal win over Edwards-Knox.

Health Sciences' Tysheen Lott drove baseline late in fourth quarter of the state semifinal game against Binghamton Seton Catholic. Once the defenders in the paint all came in his direction, he made a nifty dish to his left to a wide open Josiah Haygood underneath the basket for an uncontested layup that gave the Falcons a lead.

Williamsville South's Amari DeBerry didn't break stride while running down the lane and punching a pass from point guard Hannah Dolan over to older sister Naomi, who made a jumper in the Class A Far West Regional.

East doesn't even get to the Section VI Class D final let alone make the run to the state title without Willard Anderson's coast-to-coast layup in the closing seconds of a 62-61 sectional semifinal win over Ellicottville at Jamestown Community College. The basket came after the Eagles sank a free throw to take a one-point lead with about 9 seconds left.

The last nine seconds of the East win. Sorry about the dropped phone at the very end. #preptalklive pic.twitter.com/1owWuEfPBi

Hannah Dolan made the NYSPHSAA Class A semifinal a one-point game midway through the third quarter on a spinning left-handed finish.

Franklinville's Danielle Haskell weaved in, out and around four Elba defenders to close out her personal 14-point first quarter of the Class D Far West Regional.

It’s the Dani Haskell show. She has 14 points, all but two free throws coming around the basket just like this.#PrepTalkLive coverage: https://t.co/TfzMPEGWrj pic.twitter.com/ElaNVDAyHV 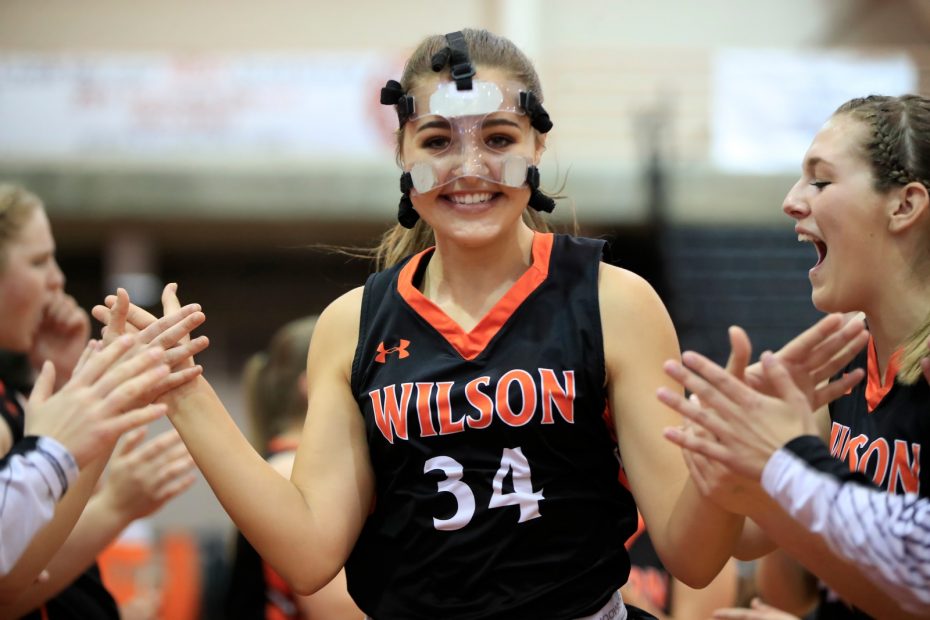 Wilson's Shea Munnikhuysen is introduced prior to the Class B-2 final. (Harry Scull Jr./Buffalo News)

Franklinville girls coach Allan Dunlap on how his team handled the defensive pressure put on by state final opponent Delaware Academy, which forced 29 turnovers and had 17 steals in the semifinals. "Danielle Haskell," he chuckled. "She's unbelievable. I've said it before, the amount of weight that that kid carries on her shoulders for us every game, breaking presses, what we expect her to do scoring-wise ... kids draped all over her today and she still doesn't turn it over. She's amazing. What can I say? That's how we always handle every pressure situation. Ball goes to Danielle. She's unbelievable."

Niagara Falls boys coach Sal Constantino on his team's defense after the Wolverines ended a Class AA semifinal win over Jamestown on a 9-3 run. "That's our go-to. We don't rely on Sal's plays, let me tell you that right now. We wouldn't be standing here talking right now. We rely on their ability, their share-ability ... and when they're playing like that and they're just so aggressive and wanting to guard and taking pride in defense, we're a good team."

Lake Shore boys coach Brett Lyford on senior guard Jay Brueckl, who went 5 for 6 on 3-pointers – including a half-court shot before halftime – in an A-2 semifinal win over Iroquois. "That was a crazy shot at the end of the half but as crazy as it is, the guy was 6 for 6 from half court at practice the other day."

East's Justin Allen swatted way Franklinville's Sam Erickson's shot attempt at the end of the first half of the Class D final at JCC.

Emphatic block at the buzzer by Justin Allen on Erickson to end the half.#PrepTalkLive coverage: https://t.co/ecJMGObB1a pic.twitter.com/owyGnmr9Mb

The Franklinville faithful who made the trip to Hudson Valley Community College made their presence known with echoing chants of "be the first" between the third and fourth quarters and during a timeout with 5.8 seconds left while the Panthers still held a 46-43 lead in the Class D championship. All 11 girls on the team applied a temporary "be the first." tattoo to their left forearms, an inspirational phrase from 1990 Franklinville grad Brian Wachter. The former standout guard came into high school with plenty of individual goals he wanted to accomplish but realized by the end of his career that he only wanted one thing: to be a part of the first basketball team at the school to win a state title.

East's Justin Allen in the Far West Regional win over Clyde Savannah during the Panthers' huge fourth quarter. He made a steal and went the distance with the one-handed finish.

Lake Shore's John Park's thunderous jam in A-2 final. The outcome was already decided but it sounded like he released some frustration with that throw down.

Leading up to a 9:30 a.m. start in the state semifinal, Starling Bryant held 7 a.m. practices to get the East Panthers ready for that game. The Panthers responded: shooting nearly 60 percent from the floor in a 78-48 beatdown of Harrisville.

Bryant after East's triumph over Harrisville. "We (as coaches) rode this rodeo before so we knew what to expect and we know how to get the kids ready. … They were up for the moment and I'm proud of them."

Class D Tournament MVP Willard Anderson after East captured the state championship with an overtime victory that snapped defending champ Moriah's 45-game winning streak. "I've never felt like this ever in my whole life. I wouldn't want to do it with any other group of guys that I did it with. I love my teammates."

Veteran coach Rich Jacob, in his first season with Park, after the Pioneers' won the Federation championship on Hutchins' buzzer-beater. "Absolutely the greatest finish I've ever been a part of and I'm very proud to be part of it. … This is the greatest victory I've ever been a part of. I'm just proud to be around great coaches and great players in a great institution."

Our One Shining Moment: The 15th annual Championship Week Awards -- with a new wrinkle

Prep Talk: This year’s shining moment was a special one

FROM DUNKS TO DOLLARS, A GOOD MONTH FOR HOOPS