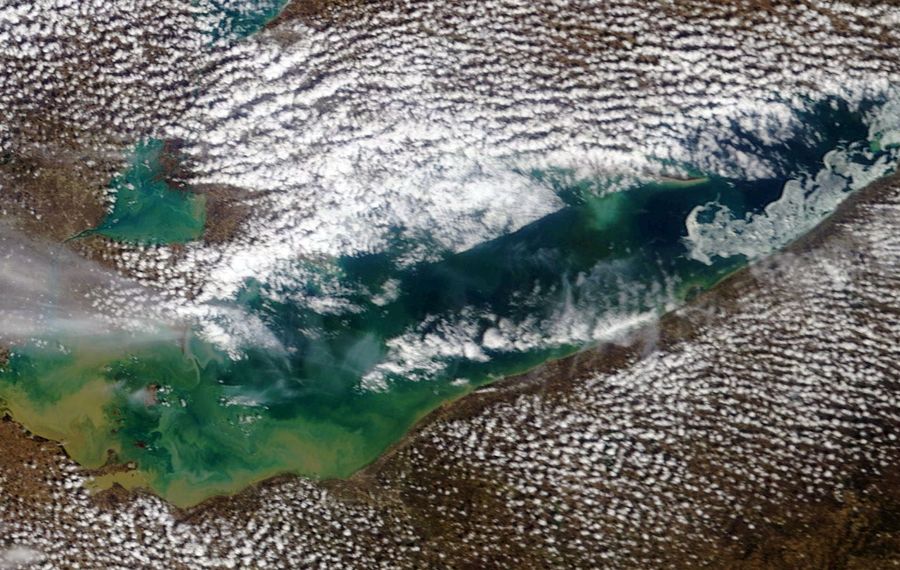 I suspect most folks are at least vaguely aware that the ice boom has nothing to do with our cold spring this year. After all, it’s been newsworthy that cold has dominated the Great Lakes and the Northeast. But then, it never has been connected with our other cold springs, either.

Despite stubborn suspicions to the contrary, ice has always tended to pile up into a traffic jam at the entrance to the Niagara River, long before there was an ice boom. The lake is shallower at the western end, and ice typically begins to break up there first with a prevailing southwest wind pushing the ice from the broad lake into that bottleneck. Take a look up above at the NOAA MODIS image from Easter Sunday.

That push is interrupted mainly when we get winds from the northeast, which has happened several times in the last few weeks. This is what it typically looks like, but most of the time, winds from the southwest rule.

In other words, the northeast tip of the lake has always been a bottleneck entering into the river, with or without the boom. The boom is there primarily to prevent sudden releases of very large floes of ice from going down the river and damaging docks and power intakes, as used to be the case. It generally succeeds in its purpose and property damage downriver has been greatly reduced.

Back to the “stubborn” idea that, somehow, the ice boom makes it stay colder, longer in the spring. There have actually been a couple of thorough, detailed studies seeking evidence one way or another on a local climatological impact. The most recent work a few years ago was published by professors SUNY Buffalo State College professors Mark LaRussa and Stephen Vermette. They and some students scoured several sets of data that had been compiled prior to and after the installation of the boom in 1965.

The Water Temperature Parameter measures the rate of water warming at the onset of spring. We’ll skip the graph. There was no measurable difference between pre-boom and post-boom.

What about air temperatures in the metro area downwind from the lake? The highly detailed records kept by the National Weather Service at the Buffalo-Niagara airport also show no significant difference in the mean, minimum and maximum temperatures between pre-boom and post-boom. As you might expect, much farther downwind effects in Rochester were also not discernible.

The study also found records from 1941 to 1987 at the Colonel Ward Pumping Station itself. These records may not be as finely calibrated as those at the airport, but these, too, show no measurable difference from pre-boom to post boom — with the lone exception of more warming in May, POST boom.

The study conclusion: “There is no evidence to support perceptions that the ice boom has retarded ice dissipation or has caused a cooling of air temperatures in Buffalo during the spring months. Our findings are consistent with the research findings of the mid- to late 1970s and early 1980s.”

So there. Settled science, and that should be one less reason for bar fights around here, OK?