The steel is up, the concrete has been poured, and the wood framing is underway for the upper floors, as a new 39-unit apartment building takes shape near Allentown and downtown Buffalo.

First Amherst Development Corp. is putting up its four-story luxury residential building on a lot across from the culmination of Pearl Street at North Street. That's the site of a former historic structure that had to be torn down in an emergency demolition after it was damaged beyond repair in a lightning strike four years ago.

The new construction project is dubbed Nineteen North for its address on the street between Main Street and Linwood Avenue. It will consist of a mixture of one- and two-bedroom luxury apartments, with covered and secure parking created by "stilting" the building on piers. Rents will start at nearly $1,500 a month.

It's aimed particularly at the nearby Buffalo Niagara Medical Campus, with its burgeoning workforce and graduate student base.

"You're one block from the medical campus to the left, and you're one block from historic Allentown to the right," said First Amherst CEO Benjamin Obletz. "This is now the fifth project of this type for us downtown, and we think Nineteen North will be really top flight."

Nineteen North is the latest example of developers creating high-end apartments in or near downtown Buffalo in a bid to cater to the growing population of millenials and other young professionals in the city's core.

Many of these tenants are more interested in renting than buying at this stage of their lives and careers. And they're willing to pay up for a higher level, especially if they're coming here from more expensive cities like New York, Boston, Philadelphia or Washington.

First Amherst had originally planned a historic renovation of the previous building, with both historic tax credits and brownfield tax credits to help finance the project. They already owned the site for several years and had started to fine-tune its proposal when lightning struck – literally.

So officials had to start from scratch. Even so, the $12 million project had to be approved by the Buffalo Preservation Board because it's in a historic district, so First Amherst worked to make the building's appearance fit with the neighborhood.

"There's a lot of stone on the front of the building, a lot of brick. We think the building works very well with the surrounding buildings and plays off them very well," Obletz said.

The "podium-type" building will be supported over a 41-car parking lot, enabling each apartment to have at least one space. Tenants will use a passkey to enter the open-air garage and pull in their cars underneath the building, before entering the ground-floor through a marble-lined lobby with soft seating, where two elevators and stairs are located.

The apartments will be spread among the upper three floors, with slightly different layouts because the top floor has larger units. The units will range in size from 800 square feet for the smallest one-bedroom to 1,600 square feet for the largest two-bedroom, which will also have two bathrooms.

Rendering of the interior of an apartment.

"We realize that the market is competitive and we need to give people a superior product, and that's what we intend to do there," he said. "We took a lot of time to make sure the units are well thought-out, well-designed and well-planned. This is a culmination of a lot of our experience ... It's become what people come to expect, and we're just taking it to the next level."

Rents will start at $1,495 per month and go up from there, with "a good chance" that the highest prices will exceed $2,000 when the final pro-forma calculations are completed.

Those price points test the extremes of the market, but "we'll be able to justify the rents," Obletz said. 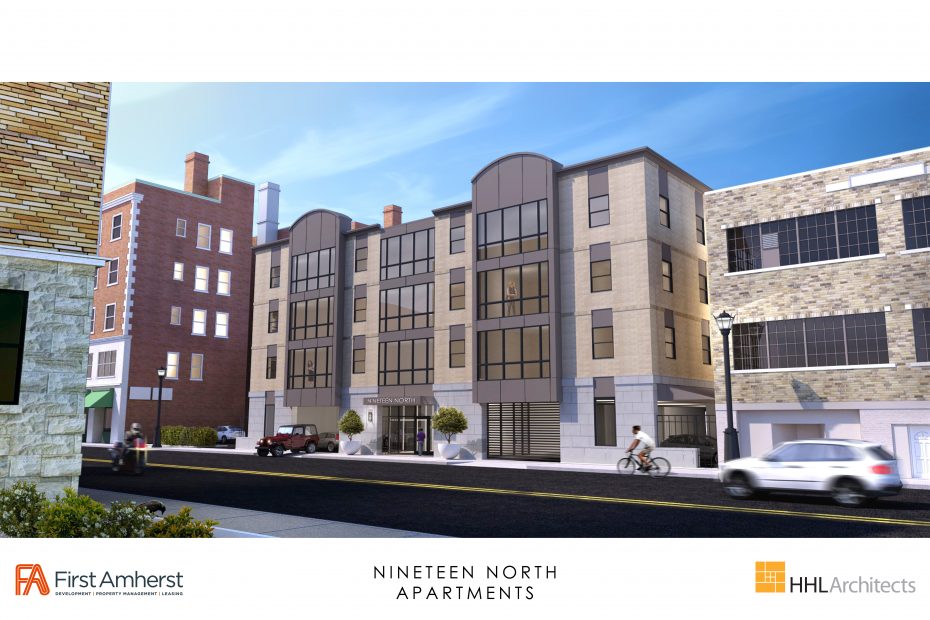 A rendering of the Nineteen North apartment project now under construction near Allentown by First Amherst Development.

The project is financed through state brownfield credits, a construction loan from Community Preservation Corp. and the developer's equity. First Amherst worked with HHL Architects to design the project and Arc Building Partners as the construction manager.

“This is a really exciting and unique play by the team at First Amherst, as it is a higher-end, ground-up development in one of Buffalo’s most coveted residential districts,” said Arc Building Partners President Frank Ciminelli II, whose firm is the construction manager for the project.

Already, the first floor steel is up, the concrete floor has been poured, and workers are turning their attention to laying out the walls and floors for the remaining three levels, which have minimal steel and concrete for the bearing walls and elevators but are otherwise wood-framed. The building's exterior facade will feature brick and stone.

Besides the project website, Instagram and Facebook pages, the developer also put up a new banner along the construction fence showing a rendering of the building and contact information. Interested tenants can just text "19" to the listed phone number to get more information.

So far, more than 60 people have used that system, while another 30 have called. "Our response so far has been excellent," Obletz said. "It really is the first project of its kind right there in that area."

Obletz said he hopes to have a model apartment completed by mid- to late summer, with the first tenants able to move in by Sept. 1.