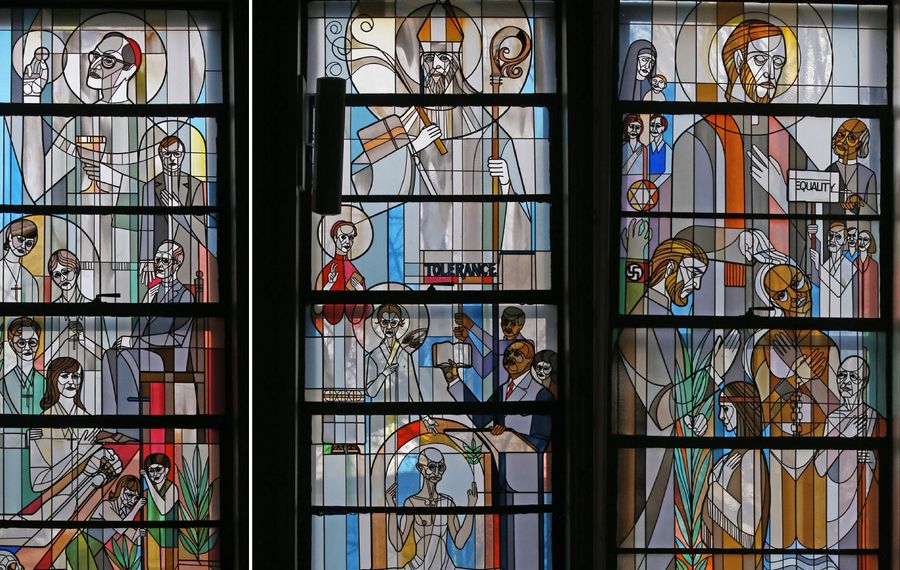 The windows that define Our Lady of Charity Parish at St. Ambrose Church in South Buffalo are unusual in their commitment to social justice.

And they are memorable for their depiction of mass shootings, drug abuse and nuclear annihilation.

But the beauty of the 18 windows, installed in 1992 and designed by Buffalo artist Russell Vacanti, lies in the stories they tell.

Vacanti depicts modern-day martyrs such as the two Buffalo priests – the Rev. A. Joseph Bissonette and Monsignor David Herlihy – who were slain two weeks apart in 1987. The pious from all faiths have a seat at the church's table, with Buddha taking a seat next to the Hindu God Shiva, and Moses sharing a pane with Mohammed.

"The windows show the importance of interfaith relations," said Gregory L. Witul, stained-glass historian. "They take existential ideas, physically manifesting them so the congregation had a better understanding of what it meant to be Roman Catholic in the modern age. With that, Buffalo was blessed with a stunning and unique set of windows."

The windows were the focal point in December when the church embarked on a four-month $100,000 makeover by Swiatek Studios. The rehab, involving the installation of a new baptismal font, redesigned altar and more, will be unveiled on Easter Sunday.

"The renovation brings new life into the church," said the Rev. Bryan Zielenieski, 38. "This building is sacred and will be around for generations to come." 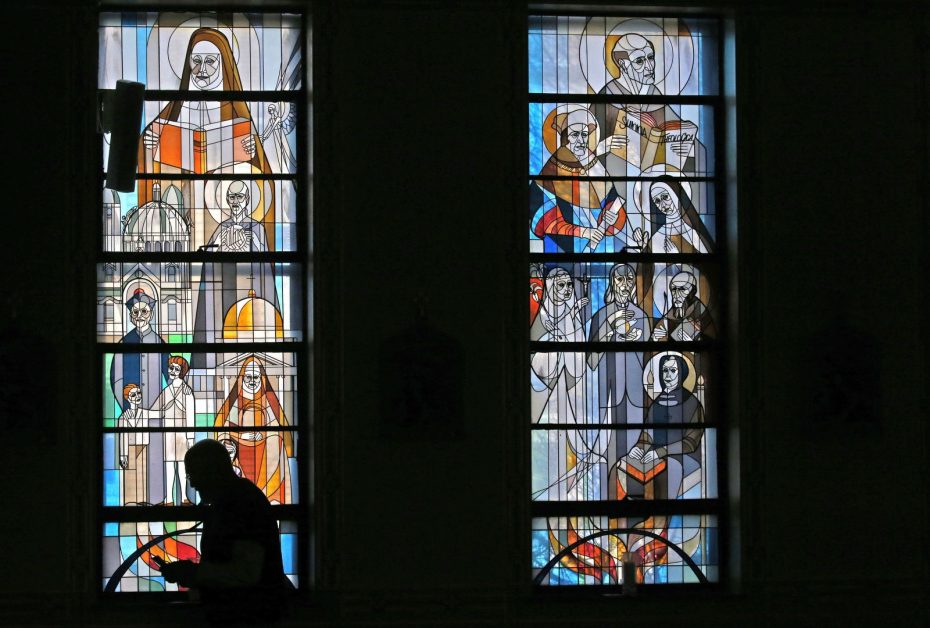 Henry Swiatek of Swiatek Studios studies his design notes as he walks by two of the 1992 windows. (Robert Kirkham/Buffalo News)

The windows, each measuring 3.5 feet by 9.5 feet, were designed to convey the teachings of Vatican II, the modernization of church  practices ordered by the world's bishops who met in Rome from 1962 to 1965.

By the early 1990s, when the late Monsignor William G. Stanton commissioned the Vacanti windows, he had had 30 years to chew on his reordered religion. Stanton had been church pastor for 16 years when the windows were installed.

"These windows are the legacy of Father Stanton," said Henry Swiatek Jr., who today runs the business with his grown children. "When you look at them – when you really study them – they are astounding in their detail. Aside from their art and religious meaning, their context in life as we are experiencing it now with gun control and nuclear threat. There's a lot to think about."

Vacanti of Boston, N.Y. was 85 when he died in 2010. On his Legacy.com page, loved ones remember him as a smiling man with silver hair known for bear hugs and a studio on Oliver Street in North Tonawanda.

Vacanti resembled the actor Al Pacino "only with long hair," said Swiatek, who worked with Vacanti on a handful of church renovation projects. "He had a slight built and was passionate about art. He was not high on religious ritual, but he was a spiritual believer."

Vacanti is best known for his work at St. Gabriel's and Annunciation churches in Elma, and a painting of Christ in a side altar of St. John Kanty's on Swinburne Street, said Swiatek.

At Saint Ambrose, Vacanti's windows play to a parish made up of many third-generation transplants from the old First Ward, said Swiatek, who becomes deeply familiar with the churches he restores.

Church secretary Eileen Charleton lists 2,000 people on the parish registry. She described the church's expansive boundaries as "from the Tesla Plant at Riverbend to the Lackawanna border and from the west side of McKinley Parkway to Lake Erie."

"They're solid people, lots of firefighters and police officers," noted Zielenieski. "We have a good number of young families. They are known for social justice. There are collections for Harvest House. On Fridays the church serves a hot meal for the homeless." 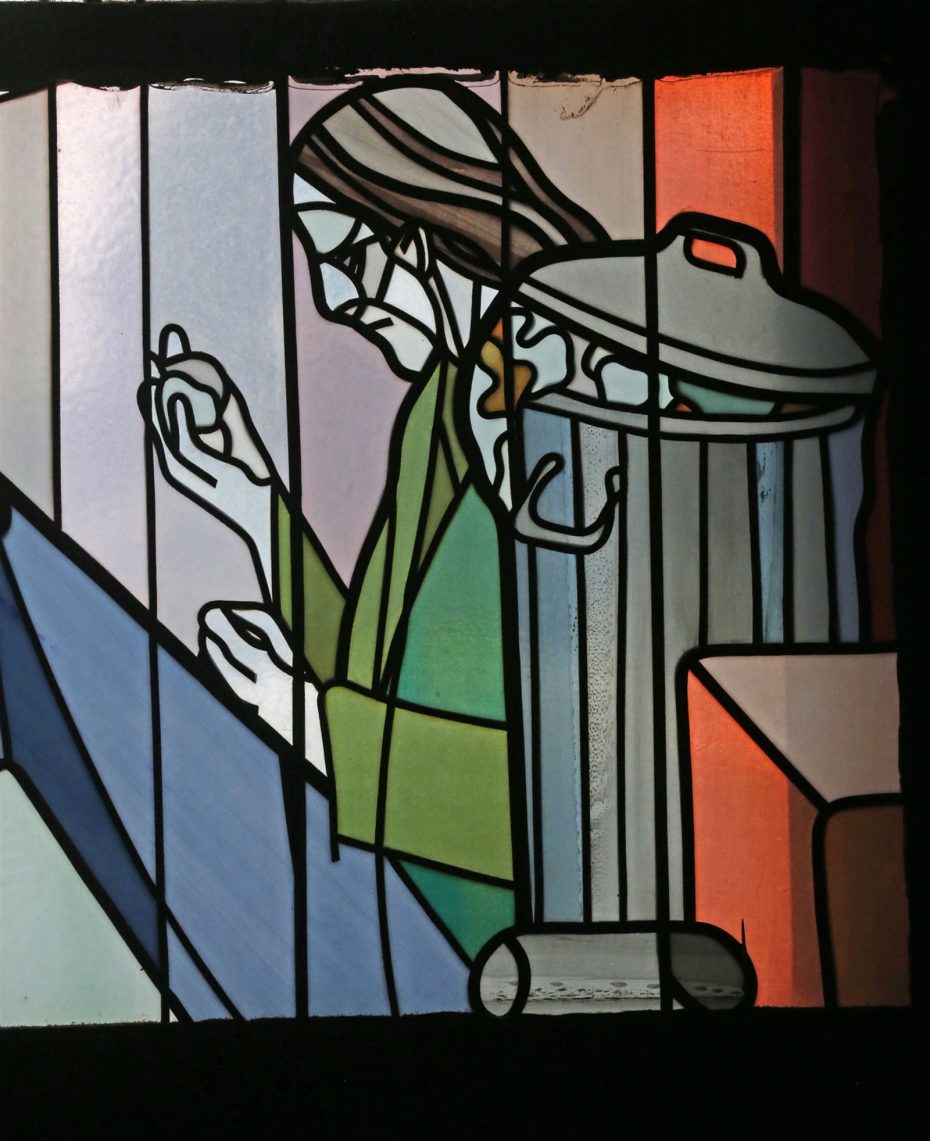 Detail of a window at St. Ambrose at Our Lady of Charity Church shows a homeless man eating from a trash can. (Robert Kirkham/Buffalo News)

Homeless people – hungry people, too – appear on more than one of the church windows. Crime victims mingle with churchmen who died in Nazi concentration camps during World War II.

Famous people also grace the windows. There's Mother Teresa of Calcutta on the window dedicated to American evangelists. Father Nelson Baker can be seen in the Window of Christian Education. Retired South African Archbishop Desmond Tutu and Dalai Lama turn up in a window called Mission Church as Servant. And Cesar Chavez, the former American labor leader who co-founded the National Farm Workers Association, appears in the Window of Prophecy, directly above Mahatma Gandhi in a yoga posture.

Although the windows are commonly described as stained glass, they actually are stained-glass overlay, made by adhering pieces of transparent colored vinyl to a clear pane of glass. A coat of acrylic glazing applied to the outside makes them shatterproof and provides insulation, Vacanti told The Buffalo News in 1992.

Eileen Charleton, 69, works as secretary for the church. The former Maryknoll lay missionary continues to be amazed by the windows after almost 10 years at the job. The windows, she said, are dedicated to Pope John XXIII for his work on Vatican II.

"I love them because they are based on Vatican II," said Charleton, who was not a fan of some of the faces depicted on the figures. "The form of some faces I don't care for. I think my brother thought they looked like Dick Tracy drawings."

The interior of the church resembled a cafeteria before Swiatek started the restoration, he recalled. Built in the mid-1950s as an auditorium for the former elementary school, the church had a dingy interior with ceiling fans and suspended lights.

"We eliminated fans and the suspended lights to keep the line of sight open. The colors we chose were complementary to the windows," Swiatek said. Freshly painted walls of light slate and Marian blue are accented by original stenciling created by Stacey Swiatek, Swiatek's daughter.

Our Lady of Charity marks the first parish assignment for Zielenieski, who was born and raised in Arcade. He was previously an assistant at St. Christopher's in Tonawanda.

Zielenieski stands 6 foot 5 inches. He also has a 77-inch wing span pronounced Swiatek after measuring the priest's extended arms. The old altar was too small for Zielenieski, explained Swiatek.

"When he's celebrating Mass the scale of the altar should be commensurate with his size," said Swiatek. "With someone of a smaller stature this altar would probably work, but with Father Bryan's presence, we need to increase the altar's length and width. We'll keep the same elliptical shape." 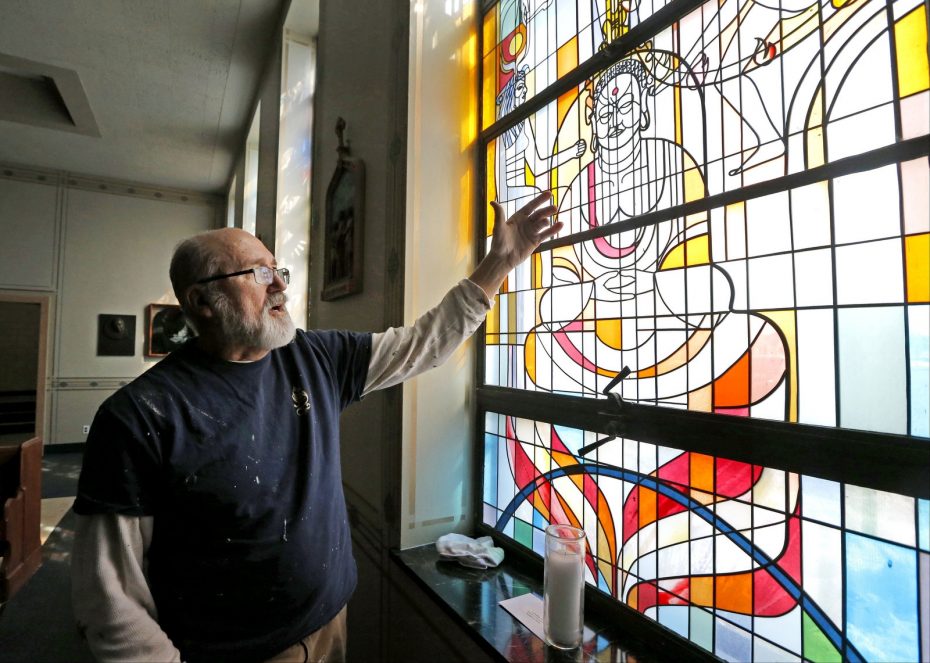 Henry Swiatek of Swiatek Studios examines the detail in the image of Buddha in one of the windows at St. Ambrose. (Robert Kirkham/Buffalo News)

The redesigned altar will include altar stones from three churches, the original St. Agatha's, the St. Agatha's that closed in 2010 and St. Ambrose. Altar stones contain a relic of the church's namesake, explained Swiatek. It is rare for one altar to have three stones, he said.

Swiatek said the resurgence of Buffalo has trickled down to its churches, producing a growing demand for skilled restorationists. He assembled an 11-person dream team to work on his list of jobs.

Artist David Erhardt studied for a year at the School of Fine Arts in the Vatican. A former calligrapher and art teacher at Lafayette High School, Erhardt worked at Boston Valley Terracotta until 2017, when he started with Swiatek.

Plasterer Seth Baldwin is a competitive swing dancer who has performed internationally. His current masterpiece, a baptismal font of pigmented plaster, mimics marble and is sealed with epoxy so it can hold water.

Muralist Steve Rovner painted the 60-square-foot Cubanesque image of Our Lady of Charity that hangs in the church sanctuary.

The restoration project won't be complete until the installation of a new seven-window set of traditional stained-glass windows designed and installed by Brett Swiatek, who will be assisted by Catherine Mahoney.

Still, the engaging windows of Vacanti continue to turn heads.

"We did a Mass mob at the church and it was boxlike and drab, but the windows make it," said Witul. "They are totally trippy. They're not even modern, but futuristic and alien at the same time."