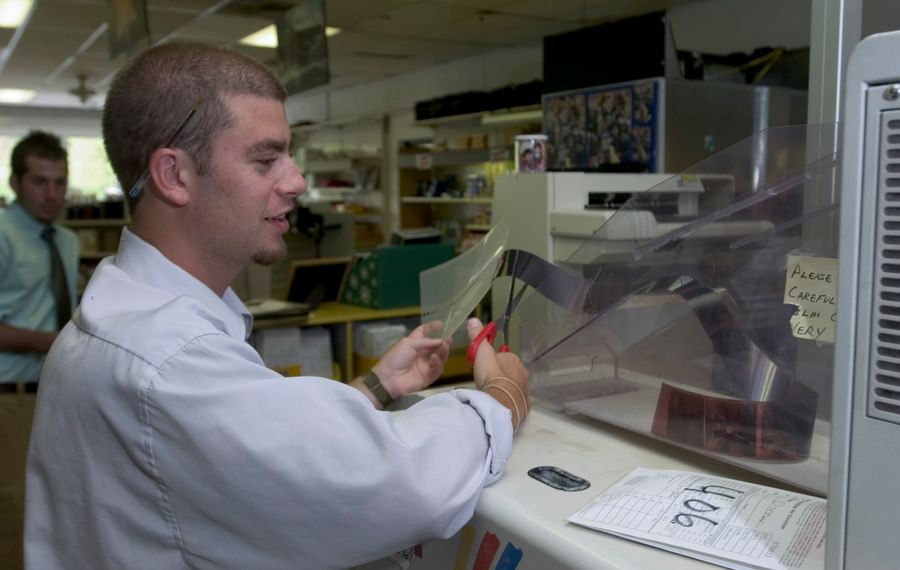 Film developing in Buffalo is fading like an old color photo.

The closing this month of Color-Tech Photo Labs in Amherst appears to leave just one retail business in metro Buffalo that still develops film for photographers.

The shift to cameras that take digital images has completely reshaped photo processing.

Delaware Camera in North Buffalo may be the last store standing here in an industry that once featured thousands of independent stores and Fotomat kiosks across the country.

"It shows that the industry is getting smaller," said Mark Miller, store manager at Delaware Camera. "It's kind of sad, because they were around so long."

Color-Tech had been in business for 36 years and had been at 3424 Sheridan Drive since the early 1990s.

Color-Tech had an agreement to sell the store to Dunn Tire. Color-Tech President Paul Crawford last year told The Buffalo News he was casually searching for a new location as he waited for the deal to close.

But the company in February told its customers through its Facebook page that it was closing for good. Color-Tech had a going-out-of-business sale in March that included office furniture, lab equipment, fixtures photo albums and other items.

"This difficult decision is based on the general decline in the photofinishing industry and a predicted further decline in the demand for photographic prints and services in the years ahead," the company said.

The Facebook post spurred an outpouring of thanks from longtime customers and regret that the owners were closing the store.

Delaware Camera's Miller said he's had a number of people come into his store in recent weeks who identified themselves as previous Color-Tech customers.

Miller said he believes Delaware Camera is the last store in greater Buffalo that still can develop a roll of film for a photographer in-house. He said some older customers prefer film and he said some young photographers, people who were too young to use film in its heyday, are trying it out now.

"It's a little hip to do that now," Miller said.

Chains such as CVS and Walgreens advertise film-developing services online, but generally they outsource the work to another vendor before providing the prints to their customers.

James Cavanaugh, a veteran architectural and aerial photographer in the area, also said he doesn't know of any other film-developing stores in metro Buffalo.

Cavanaugh last shot a photo on film in 2001 but he said he still feels "a little bit of sad nostalgia" at the news of Color-Tech's closing.

He said photo labs were gathering places for photographers. Photography websites and groups on social media now fill some of that void, but it's not the same, Cavanaugh said.

"It was a scenario where that sense of community got lost," he said.

Cavanaugh said switching to digital photography has made it cheaper and more convenient to process and print photos, and has made it easier for people to break into the business.

He said when people ask him whether he misses taking and processing film photos, "My answer is, 'Hell, no. Why would I ever go back?' "

Color-Tech is making way for Dunn Tire, which on Wednesday bought the property for $1.4 million. Dunn Tire will relocate its store at 3045 Sheridan, in the Northtown Plaza, into the new space just east of Sweet Home Road.

The company already has received approval from the town to renovate the Color-Tech building and to construct an addition, creating a 10,500-square-foot flagship store that is 50 percent larger than the existing store.

The entire project, including the purchase price, should cost between $2.5 million and $3 million, said David Simons, the company’s executive vice president and chief financial officer. He said he hopes construction can begin within 60 days. Unless work finishes up by early fall, Dunn Tire likely won't move into the new space until spring 2019.