The state this week awarded another $4 million grant to the Buffalo Urban Development Corp.'s Northland Corridor redevelopment project, advancing the city's efforts to transform a 35-acre section of the East Side into a light manufacturing training and business hub.

Empire State Development Corp. announced its approval of the grant as part of the fifth cycle of its Restore New York program, which regional director Michael Ball called "one of the most competitive rounds."

The new funds will be used in part to demolish one derelict building on Northland Avenue, while renovating another in preparation for a new urban farming tenant, Project Rainfall.

"It's more exciting news for Northland," said Buffalo Mayor Byron W. Brown, who chairs the board of the Buffalo Urban Development Corp., which is overseeing the Northland project. "This will also help to transform a neighborhood, a once great neighborhood in the city of Buffalo, that could use this investment."

In turn, that will help BUDC to refocus some of its effort on other parts of the campus besides the primary Workforce Training Center building, which has seen the bulk of the attention so far.

"We have a lot of attention on 683 Northland, but we own other properties as the campus-wide initiative," said BUDC Vice President David Stebbins. "The governor's money helps us to address other properties in the corridor." 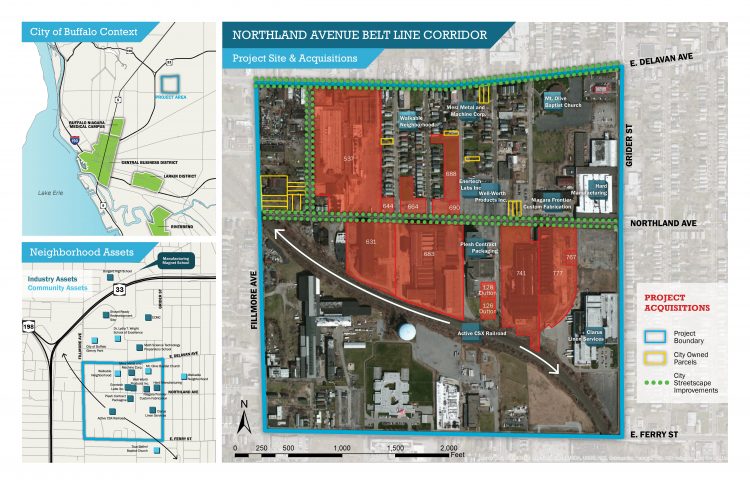 A broader look at the Northland Corridor project.

Coupled with funds from Buffalo Billion I and II, as well as other sources, total state investment in Northland already exceeds $100 million, "and this only adds to it," Brown said.

"It's an amazing project for our city and our entire region," Brown said.

BUDC, which purchased a dozen vacant or aging industrial properties with over 700,000 square feet of building space, is working to redevelop the area bounded by East Delavan and Fillmore avenues and East Ferry and Grider streets. Some of the buildings are being renovated and readied for new tenants, while others are being demolished, cleaned and cleared to create shovel-ready land for new facilities. 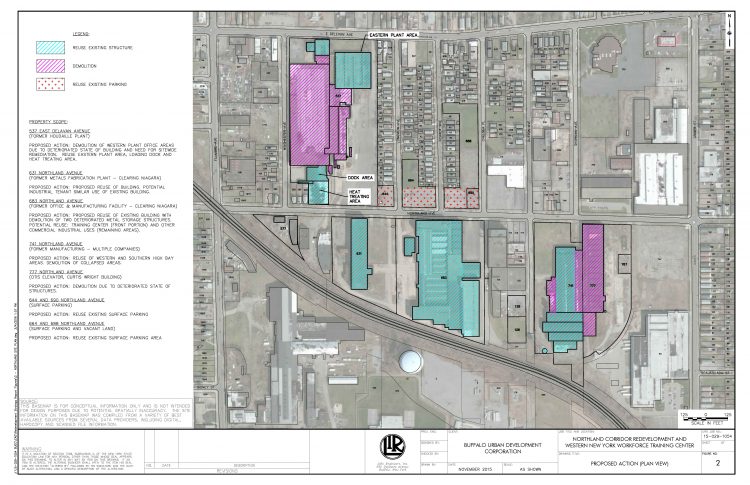 The goal is to create an economic development center that can bring new companies, jobs and investment to an impoverished area of the East Side.

The state-funded project is anchored by the planned new Workforce Training Center, to be located in a sprawling 235,000-square-foot building at 683 Northland, alongside Buffalo Manufacturing Works and other tenants. It's designed to train several hundred students in various advanced manufacturing skills that are needed for today's jobs.

Work is already well underway on the training center, which is now half-finished, with the build-out of the Buffalo Manufacturing Works space and other areas to follow.

The BUDC Board on Tuesday also accepted a separate $6 million state grant to purchase manufacturing, welding and electrical training equipment, as well as a $25 million grant for the relocation of Buffalo Manufacturing Works to Northland. And it approved a $414,226 contract with Frey Electric Construction Co. to install audio-visual equipment and systems in the building.

But the Northland project extends beyond the one building. About $1 million of the new grant will be used to demolish the century-old 250,000-square-foot Otis Elevator building at 777 Northland, clearing about five acres for future redevelopment. BUDC is working with the State Historic Preservation Office and the city Preservation Board to retain and restore portions of the early 1900s facility, such as a chimney, three bays, and a limestone knee wall.

The other $3 million, plus about $1 million left over from an earlier Restore New York grant, will help with the renovation of 541 East Delavan into the home of Project Rainfall. That's a 40,000-square-foot building, with a mural on its facade, that was known as the Eastern Plant Area of the former Houdaille Industries plant. It was built in 1930.

"This is another building that we want to bring back to life," said BUDC President Peter Cammarata.

A rendering of Project Rainfall.