Erland E. "Erkie" Kailbourne is known for leading a 1998 campaign to ensure the Buffalo Bills remained in town, and for briefly serving as Adelphia Communications' interim CEO after the Rigas family was ousted.

But Kailbourne also been a member of the board of directors of Five Star Bank's parent company, Financial Institutions, since 2005. Now Kailbourne has notified the Warsaw-based bank he won't stand for re-election to his seat when his term expires at the annual shareholders meeting on June 20.

"His decision to not stand for re-election was not due to any disagreement with the company," the bank said in a regulatory filing.

His departure won't even create a vacancy. "The board has determined that it is in the company's best interest to reduce the size of the board from 12 to 11 members," the bank said in the filing. 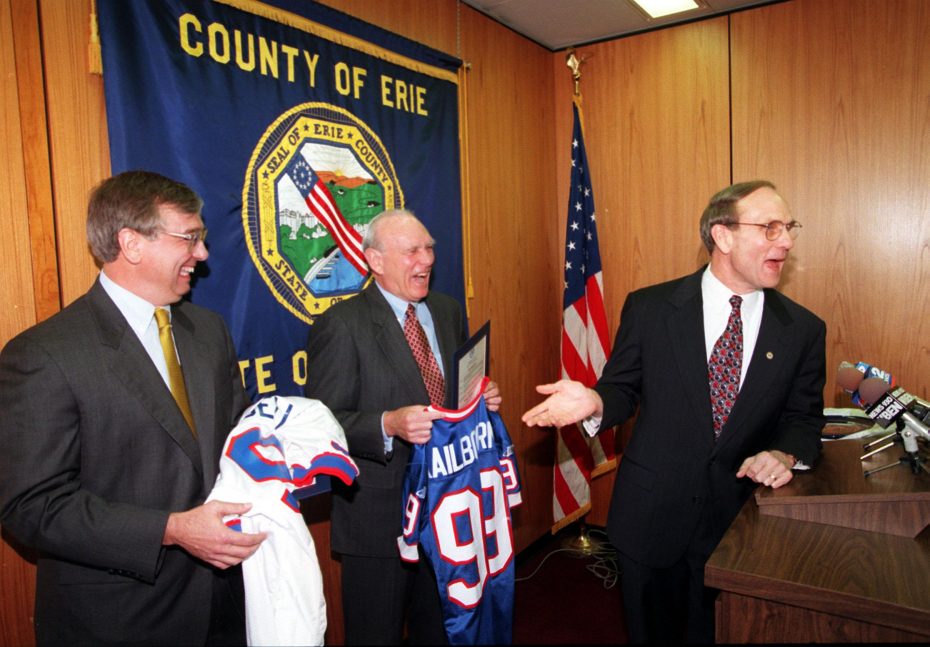 Erland "Erkie" Kailbourne (center) was acknowledged for his role in helping keep the Bills in town in the late 1990s. (News file photo)

Kailbourne, a Wellsville native, was formerly the chairman and CEO of Fleet National Bank, New York, which later became Bank of America.

The veteran banker served as chairman of the Business Backs the Bills Committee in 1998, leading a drive to sell $11 million in luxury box and club suites to ensure the franchise wouldn't leave town. In 2002, he was named Adelphia's interim CEO, a position he would hold for several months after John Rigas stepped down amid turmoil at the cable company.