Leaving the family home for the freedom of a college campus is a memorable step for young people.

Seven Lewiston-Porter High School students from China have now made that move twice.

First they left their homes across the globe for life with host families. In January, they moved from those homes into a residence hall on the Niagara University campus.

"With host families, you get to know more about how Americans live and be part of their family," said Siyu Wang, one of the seven. But living on campus at NU gives them "more freedom, absolutely," she said, to use the gym, go to the library and participate in college activities.

It's a lot to ask of the group, who are all focused on studying and selecting a college for next year, but they seem to have settled in well.

Like four of the other students, Wang is from Tianjin, a large city just southeast of Beijing, where Lewiston-Porter has a relationship with Tianjin No. 2 High School. Two others, Wenting "Tina" Lu and Xiaotang "Cassie" Wang, are from the city of Zibo in Shandong Province, south of Tianjin.

"Experiencing campus life like this is very good for our future," said Heyang "Stephan" Wang. "The library is a great place to study."

Four of the students have the common Chinese last name of Wang, but are not related to each other. Some have chosen American names to use during their stay in the United States. Like many college freshmen, all are 18 except for Yingze "Danny" Jing, who is 17. 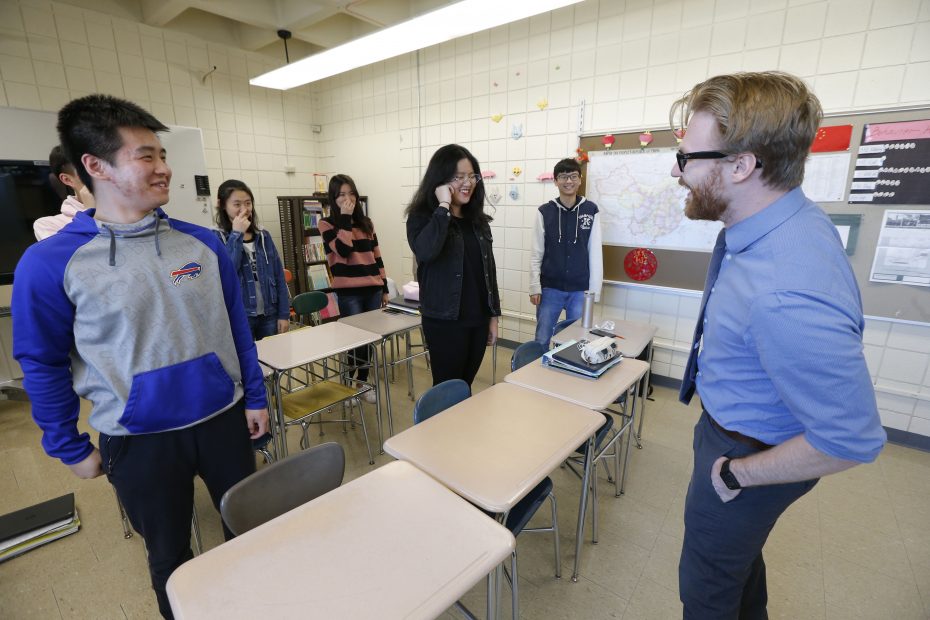 Andrew Sharpe, social studies teacher, right, who has taught in China for five months, runs through a game with the Chinese Lewiston-Porter students who have moved into a residence hall at Niagara University. (Robert Kirkham/Buffalo News)

After several months with host families, the four moved into a Varsity Village residence hall, where they are supervised by Lew-Port social studies teacher Andrew Sharpe, who has taught at No. 2 High School for five months over two visits, the last from September to November of 2017.

In the dorm, Sharpe and the male students live downstairs, with the three young men sharing a triple room. The first floor also has a common room and kitchenette, where the students sometimes cook food from home.

Upstairs, "the girls live in luxury," said Sharpe, smiling. Two of them share a spacious room set up for three people, while the other two have the privacy of single rooms.

The students get along well and live happily together, said Sharpe. "Do you guys even need me there?" he asked, to laughter.

"They have been teaching me some Chinese, but it's mostly an English immersion atmosphere," he said.

"So far there have been no hiccups," said Rhonda Shiah, who worked in the international student office at Niagara University before being hired as international programs coordinator at Lew-Port.

"It's worked out really well. The students have full access to Niagara University's campus, so they can go to the basketball games, they have their meals at Clet Hall," Shiah said. "They are able to participate in any activities for the students. The Chinese students are very, very academically focused, so they do a lot of studying, they use the library quite a bit."

In the early days after they moved in, Sharpe took them as a group to the cafeteria and to a basketball game to get them used to the experiences.

Since then, they have branched out. Like all Lew-Port students, they are required to do volunteer work, and after helping out at the Peach Festival and a walk to fight Alzheimer's disease, they have settled on weekly visits to St. George's Church in Niagara Falls, where they help out with the weekly Kidz Club program for school-aged youngsters.

The Lewiston-Porter district has been active in international and exchange student programs for many years, said Superintendent Paul J. Casseri.

Except for Siyu Wang and Yujie Wang, who spent last year studying in the United States, all the other students' families visited Lew-Port when they dropped off their students. Program officials showed them both the homes of the host families where their sons and daughters would be living for several months, as well as the residence hall at Niagara that would be their home later.

The district has developed relationships with schools in Argentina, Germany and Turkey, and have had students from France and Italy to do short-term exchanges. But its closest relationship is with Tianjin No. 2 High School, which Casseri has visited many times and where Sharpe has taught.

"We take a multifaceted, multi-pronged way to expose our students and our campus to international education," said Casseri, who made a trip to China in mid-March to meet with educational partners there.

The students come as international transfer students on F-1 student visas, which they can just maintain when they begin to study at a college in the United States.

The program, which began in 2014, has been brought some 32 students from the Chinese educational system at from Tianjin No 2 High School to study at Lew-Port. They pay tuition to Lew-Port and room and board at Niagara University, totaling $29,500 per year, said Casseri.

The program pays for itself and is not supported by tax money, "which is the absolute beauty of it," said Casseri.

At the end of the year, they graduate with a state Regents diploma and move to a college or university in the United States. All the students have applied to several colleges, and Lew-Port assists them in that transition.

If they had stayed in China, all the students would have taken the grueling two-day Gaokao college entrance test that would determine their futures, said Casseri.

The students who leave the Chinese system to get an American education "have other interest or talents, some of them are very artistic," he said. "A lot of these kids are looking to have a different path in life. When they come here they revel in the fact that they can take art and music, a lot of them perform in a band, orchestra or chorus, a lot of them involve themselves in athletics, so they really get that American high school experience." 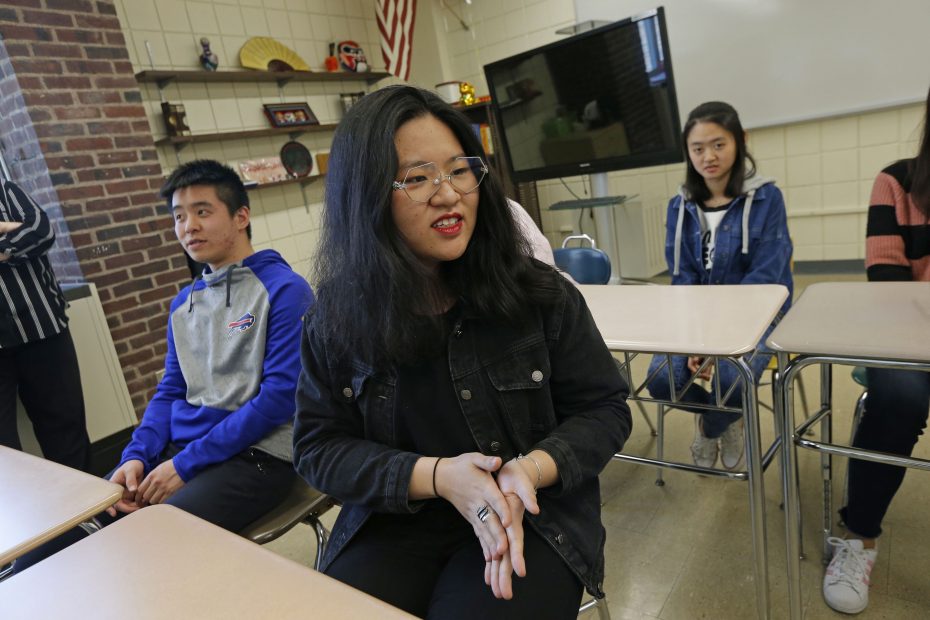 While other brokers or agents in China promise parents that their young people will get a classic American education, some fail to deliver, said Casseri. But Lew-Port's program has gotten good word-of-mouth endorsements, he said. "We really give the kids a well-rounded experience."

The district's website has an 18-page application for international students that includes a map of the United States with Lew-Port marked on it and the note that it is located "less than 10 miles from beautiful Niagara Falls." Even in China, said Casseri, "The beautiful thing is that they are familiar with Niagara Falls, so that always helps us, that they can put that idea in their minds. They really do love it when they get here."

The seven students take a daily class with Sharpe, and they use that time to do everything from discuss concepts that need explanation, such as homecoming, to do college prep or to review material from their other classes.

On this day, to work on English skills, they played a quick round of "Simon Says." The students then suggested a related but much more complicated Chinese game in which each student said a number, substituting a clap if the number were divisible by 3 or had a 3 in it.

They have a wide variety of interests and all have applied to at least a few colleges.

Two of the students play sports. Yujie Wang is on the track team and is interested in studying business.

Heyang "Stephan" Wang, who plays on the tennis team, is considering a career in sports management, while Wenting "Tina" Lu is interested in a career in business.

Siyang "Sonya" Shen would like to study psychology. She has been accepted at a couple of colleges and is waiting to hear from the rest before making her decision.

Yingze "Danny" Jing is considering a chemical engineering program and has many college applications out.

Although the host family program has been successful in the past, it has grown increasingly difficult through the years to recruit families willing to take an international student into their homes for the year.

"It's a big commitment and a long commitment," said Dr. Deborah Curtis, executive director of the Brennan Center/International Relations Office at NU.

She said that Niagara University has also been actively working to recruit students from China, so when the issue of housing the high schoolers came up, "some people from both institutions got together and discussed the issue, and it seemed like a good partnership could be formed. This just seemed to be a natural fit."

"This newest component of our longstanding partnership with Lewiston-Porter reflects our vision to fully diversify the student experience, both for the young people studying on our campus and for the students coming from overseas," he said in the statement. "By embracing the richness of culture, thought and language of international communities, we extend our educational and social mission to graduate citizens of the world."

The university has 158 international undergraduate students in its U.S.-based programs, a 25 percent increase since 2012, "which has contributed to a more well-rounded learning environment and made a significant economic impact on the Western New York region," according to the statement.

As well as benefiting both the high school and the university, Curtis said living in a small residence hall with other students from China and a teacher chaperone "is preparing them for life next year, whether they decide to join us at Niagara or wherever they might go."

For now, the students' daily transitions between high school classes and college living are easy. The university is within the Lew-Port school district and the Chinese students are able to catch a bus at Niagara University daily on a route that picks up students from nearby neighborhoods.

At NU, "The campus international department has rolled out the red carpet for them," said Casseri, with Curtis inviting them to participate in the New Year celebration on campus.

So if they choose to attend Niagara University, which several have, "it's a seamless transition for them," said Shiah. Casseri said NU is "big enough that it provides a lot of the facilities and it's small enough that they really do take care of the kids."

While this group was settling into their new lodgings, Casseri was in China recruiting students for next year. "We recruited in November and we have five students who are committed, and there are probably 12 to 15 more interested," he said. "We'd like expand our program, to eventually get it to 20 to 25 kids."

This year's group, said Sharpe, are "most interested in the culture here and enjoy living life like an American. They spend a lot of time asking about colleges and studying next year, but they are also focused on trying to make friends here at Lew-Port."