Economic development officials in Buffalo imagined a sprawling campus for Amazon that would have extended from the city's tallest building to the Buffalo River as part of a pitch to lure the company's second headquarters to the region.

And they dangled more than $500 million in tax breaks, in addition to still undisclosed state incentives, in their bid for the project.

The proposal didn't make the second round of Amazon's highly publicized competition for a city in which to build a massive campus of 8 million square feet. But details of the bid made public this week give a glimpse into what the cities of Buffalo and Rochester were willing to offer to lure Amazon here.

"This process gave us an opportunity to show publicly just how aggressive we can be, how ready we are to respond," said Alan Rosenhoch, director of business development for Invest Buffalo Niagara, the nonprofit regional economic development organization formerly known as Buffalo Niagara Enterprise.

The proposal, detailed in about 200 pages submitted to Amazon in a joint bid from Buffalo and Rochester, included incentives from both cities, as well as the state.

In Buffalo, the proposal outlined a scenario in which Amazon would take up the vacant, 38-story One Seneca Tower, as well as two downtown buildings that currently house offices for HSBC Bank USA and The Buffalo News.

The unsuccessful proposal also called for multiple additional buildings to be constructed alongside and behind them, as well as new facilities in Canalside and further south through the Cobblestone District toward the Buffalo River and wrapping around KeyBank Center and HarborCenter.

In turn, the Seattle-based Internet retailer would have received more than $500 million in tax breaks, plus a still-unknown pot of probably billions of dollars in additional state incentives, over more than a decade of growth.

That doesn't include what was offered as an alternative in Rochester – where $700 million in tax breaks was offered as part of a proposal that would have been similarly anchored by the Xerox Tower and Kodak Tower Commons, plus more than 26 other properties with over 15 different owners.

That's what the two cities, the state and at least two major local companies were willing to give up just to lure one of the biggest fish ever dangled in front of government officials anywhere in the country: 50,000 new jobs, a $2.5 billion investment in construction and equipment, and the claim to Amazon's second global headquarters.

"This is the largest single economic development project that any of us have ever heard of in history," Rosenhoch said. 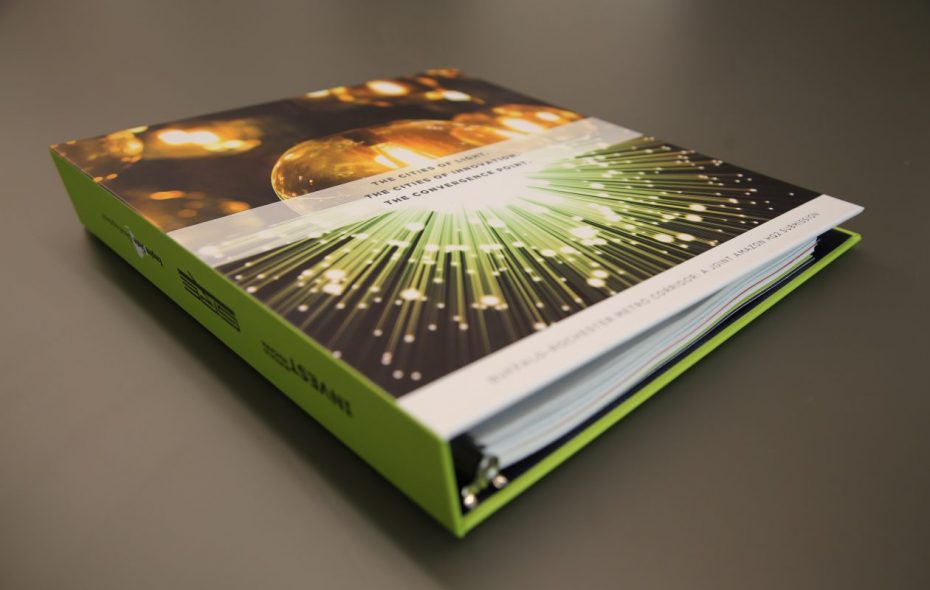 Buffalo and Rochester, with state support, submitted a joint bid for Amazon.com’s second headquarters, with 50,000 jobs.

The details from the joint bid by the two Western New York cities were made public Tuesday, more than two months after Buffalo and Rochester failed to make the cut for the top 20 candidates. More than 238 bids were submitted from cities and states around the country in response to Amazon's unusual public request for proposals.

A proposal by New York City is still in the running for the final selection, so state officials won't release details of how much New York uniformly offered to Amazon for each of the four regions in the state that submitted bids. But officials at Invest Buffalo Niagara discussed the local proposal with The Buffalo News and showed the full presentation to a reporter Tuesday evening.

"We trust our partners at the state. We know how aggressive they can be for the right projects," Rosenhoch said.

The specifics were first reported earlier in the day by the Rochester Democrat and Chronicle and WGRZ-TV, after their Albany bureau obtained the submission from the Empire State Development Corp. through a Freedom of Information Law request. A similar request by The Buffalo News is pending.

The binder document was full of data, diagrams, photos and other materials designed to highlight the region's strengths and potential, with a particular focus on education and workforce development.

"We tried to do everything we could to try to tailor the proposal in a very concise way to check the boxes we felt were important," Rosenhoch said.

It highlighted the colleges and universities from Buffalo to Syracuse and Ithaca, plus details of business successes, public-private partnerships, the labor market and workforce pipelines.

It also discussed the extent of transportation networks and future options, regional connectivity, renewable energy, and even the area's resistance to weather. And it emphasized affordable housing, year-round outdoor activities, cultural organizations, sports and diversity of population.

"Our growth is undeniable. Buffalo has come a very long way in a short period of time, and we are only going to continue to climb," Buffalo Mayor Byron W. Brown wrote in an accompanying letter, in which he touted what Buffalo has already achieved in recent years with the city's redevelopment, its new Green Code, and its efforts to attract new business.

He said Amazon would have propelled "Buffalo to an unprecedented peak in our progress" and pledged the city's "complete cooperation and support for every aspect of this proposal... so that you can truly appreciate all that our great city has to offer."

State leaders backed the effort, citing New York's long history of commerce and transportation, its strength in education, and its efforts to stress both economic and social progress. "New York is submitting proposals from every corner of our great state, but we are one New York – and we will work with you to create the greatest possible benefit to Amazon and to all New Yorkers," Gov. Andrew Cuomo wrote in his own letter.

The highlight was demonstrating the existence of enough available real estate for Amazon to use both immediately and eventually. "You had to be able to demonstrate this right upfront, to get in the door," said Thomas Kucharski, CEO of Invest Buffalo Niagara. "You needed a motivated property owner and you needed to surround it with the rest of the proposal to be viable."

Those plans were whittled from a much larger pool of about two dozen site options that property owners and developers presented to Invest Buffalo Niagara in response to an appeal for properties that could meet Amazon's needs.

"We went through a very detailed process evaluating every site option that was submitted to us, and using our own knowledge of our region's real estate stock," Rosenhoch said. "We treated this thoroughly and very diligently." 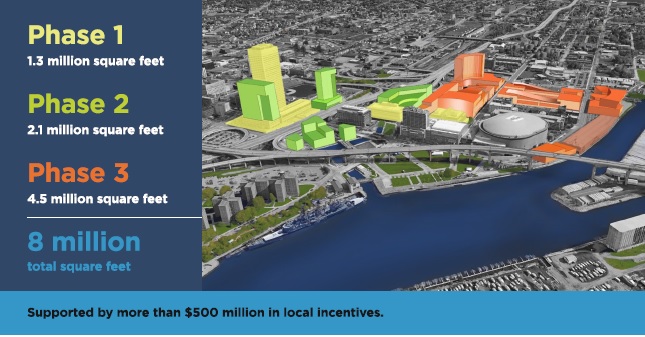 A rendering of the overall project area envisioned by the joint Buffalo-Rochester proposal for Amazon.com.

The proposal envisioned three phases of development, starting with the three existing buildings. One Seneca Tower, the former headquarters of HSBC Bank USA, is currently vacant, with more than 900,000 square feet of overall office space.

Owner Douglas Jemal has begun a redevelopment of the plaza level to create new residential, restaurant and retail space in a bid to bring more life to the property, but does not currently have a firm plan for the tower, which CBRE-Buffalo is marketing for lease. So a selection by Amazon would have instantly solved the problem of how to fill up the tower.

In Phase 2, a pair of new towers would have been constructed on pre-engineered sites adjacent to One Seneca, adding another 920,000 square feet. Additionally, two more buildings would have been built at Canalside and on parking lots behind the Buffalo News building, for another 1.2 million square feet.

Finally, the publicly owned lots and DL&W Terminal, which are government-controlled, would have been turned over to Amazon for a nominal fee, according to the submission. Another 4.5 million square feet of space would then be constructed, filling out the total. And all the proposed buildings conformed to the Green Code, Rosenhoch and Kucharski noted.

Rosenhoch and Kucharski said HSBC and The Buffalo News agreed to move if the deal had been sealed.

Kucharski and Rosenhoch acknowledged their disappointment at not being selected, but said it was still a valuable exercise for the future, including for future collaboration with Rochester. Already, IBN has seen "a significant bump" in the number of companies looking at the area for potential projects in the first quarter of this year compared with past quarters.

"This proposal does have the power to get us in the game and get us looks in the future, that perhaps we may not have gotten," Kucharski said.

They said they did far better than expected, based on comments from Amazon executives. Among metropolitan areas that submitted joint or regional bids, the Buffalo-Rochester proposal was one of only two that received a second look from the company, they said.

"They said we were one of two that did a really good job of telling our story," Rosenhoch said.