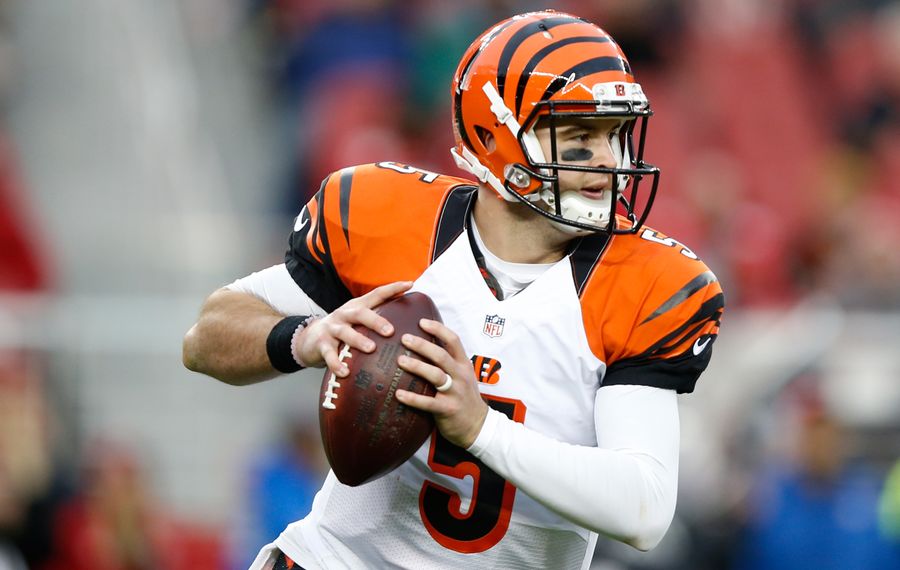 ORLANDO, Fla. – Marvin Lewis broke into a smile and seemed on the verge of laughing out loud while he spoke about AJ McCarron.

Lewis coached McCarron the past four seasons with the Cincinnati Bengals. For now, McCarron is expected to be the Buffalo Bills' opening-day quarterback.

So what is it about McCarron that makes Lewis beam at the mere mention?

"He's a joy to coach," Lewis said Tuesday morning during the coaches' breakfast at the annual NFL owners meeting. "He's what you want, you know?

"You want a guy who always feels he's better than he is. That's part of being a quarterback in the NFL."

A guy who always feels better than he is.

That comment can be taken two ways. McCarron wasn't better than Bengals starter Andy Dalton, for sure, but the Bills expect McCarron to be a better pocket passer than Tyrod Taylor and perhaps blossom in the role.

"You've got to have that kind of self-confidence where, when you walk into that huddle or that meeting room, everyone feels good about you," Lewis said.

McCarron won two national championships at Alabama, but in the NFL he has played only a dozen games and started four, including a 2015 playoff game. He has thrown 174 NFL passes, seven touchdowns and two interceptions.

His limited workload and the Bills' draft capital portend a legitimate competition among the veteran, a rated rookie and sophomore Nathan Peterman.

"I'm excited about AJ and his opportunity in Buffalo," Cleveland Browns coach Hue Jackson said. Jackson was McCarron's first offensive coordinator with the Bengals and tried to trade for him last season.

"I think Buffalo's getting a winner, a guy that will come early, stay late, work extremely hard, loves football, loves winning more than losing, can't stand to lose. He knows how to elevate his teammates."

Buffalo holds the 12th and 22nd overall picks and could move up higher to select the prospect they covet.

Although a franchise hopeful could be on the way, McCarron flashes the glint of a leading man at least in his approach to the job.

"AJ's always been a really confident player in himself and his abilities," Lewis said. "He's had a great deal of success, and he believes that he will always continue to have success. That's part of him.

"He's been a fine leader. He was good for the football team even in the backup role for us. And he was great for the rest of the guys. He's been an uplifting player all the time."

Lewis praised McCarron for "mentoring some of the hard-to-reaches" in Cincinnati's locker room. The coach explained McCarron has a knack for keeping distracted minds focused on team goals.

"He has a way about him that I think you'll see early," Jackson said. "He knows how to get players to buy in to what they're trying to do. That's a gift."

Why, then, were the Bengals willing to trade McCarron within the AFC North last season?

"It had to be at a certain price," Lewis said. "As Mike Brown told them, 'It's not our job to make the Cleveland Browns better, but I think this player will help you.' That's why the price was what the price was."

Cincinnati accepted a proposal to send McCarron to Cleveland for second- and third-round draft choices at the Oct. 31 trade deadline, but Cleveland's botched paperwork scotched the deal.

He became a free agent after an arbitrator ruled his 2014 season on the non-football injury list counted as an accrued year toward his rookie contract.

The Bills snagged a relative bargain, signing McCarron for two years and $10 million, with $7.9 million in guarantees.

"If the Buffalo Bills don't make the offer he got," Lewis said, "he likely comes back to Cincinnati again and does it a year from now.

"There was no animosity. We love AJ. He's been a great player for us in that building."