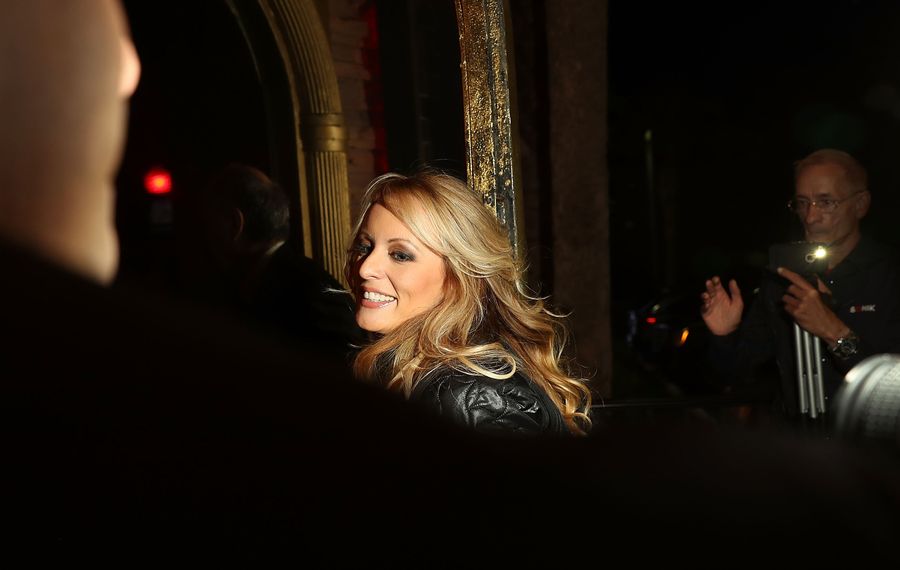 WASHINGTON – "It's his business."

That's one argument for ignoring adult film star Stormy Daniels' salacious and occasionally humorous allegations about an affair with Donald Trump a decade before he was elected president.

But it's a bad argument. Stormy Daniels' allegations, viewed in the broadest context, could prove to be far more troublesome to Trump than a slap on the rump.

Hush money can be illegal: So often politicians get in trouble not through wrongdoing, but through the coverup of wrongdoing. (Remember Watergate?) And the coverup is just what's at issue in Stormygate.

Trump's lawyer Michael Cohen admits that he paid Daniels $130,000 in October 2016, just days before the presidential election, saying he took out money on his home equity line of credit to do so.

The lawsuit is by no means a slam-dunk for Daniels and her lawyer, but it's not the only legal threat that Trump – and Cohen – face because of this mess.

What Cohen did might have violated federal campaign law. That's because his payment could be seen as an in-kind payment to the Trump presidential campaign – and no individual can, under the law, give more than $2,700 to a presidential candidate's campaign.

“If he does this on behalf of his client, the candidate, that is a coordinated, illegal, in-kind contribution by Cohen for the purpose of influencing the election, of benefiting the candidate by keeping this secret," Trevor Potter, a Republican who used to chair the Federal Election Commission – told Newsweek.

Cohen says he made the payment out of affection for Trump, but thanks to a complaint filed by the good-government advocates at Common Cause, the FEC and the Justice Department will have to consider whether that $130,000 payment broke the law. And if it did, Cohen will likely have to pay a fine.

More importantly for Trump, the case means Stormygate will drag on in public for months, no matter who is right.

Stormy is not alone. A few days before Anderson Cooper interviewed Daniels on CBS, he interviewed a former Playboy model named Karen McDougal, who claimed on CNN that she had a much more prolonged affair with Trump than Daniels did at about the same time.

McDougal is suing the parent company of the National Enquirer, which is run by a friend of Trump and which bought McDougall's silence for $150,000 in 2016. Now, like Daniels, McDougal wants out of her nondisclosure agreement.

This payment, too, could also be a campaign finance law violation – if there was coordination between the National Enquirer and the Trump campaign.

Summer Zervos, a onetime contestant on "The Apprentice," has filed a defamation suit against Trump, saying he made unwanted sexual advances toward her. And earlier this month, a New York state judge allowed that case to proceed.

That means Trump now faces three separate court cases where revelations of his supposed sexual adventures could be laid bare for all of America to see.

Trump has consistently denied all the allegations, which he only hinted at on Twitter on Monday.

"So much fake news," he tweeted the morning after Daniels appeared on "60 Minutes." "Never been more voluminous or more inaccurate."

No matter what Trump says, these lawsuits are likely to fill up the cable TV airways for months to come and maybe sour some people on their president in the process.

And all of it will be about a subject – sex – that's much more compelling to most people than any complicated special counsel investigation.

Mueller might care. Special counsel Robert Mueller has spent months probing Russia's attempts to influence the 2016 presidential election on behalf of Trump. And while he has had nothing to say about Daniels, McDougal and Zervos, there's reason to think he could be paying attention to some unanswered questions posed recently by Matthew Yglesias of Vox:

Has Trump payed hush money to other women?

And if foreign intelligence agencies knew of Trump's dalliances, might this raise national security concerns? Might some spy in some foreign land have compromising information on Trump that foreign diplomats could hang over his head to pressure him for favors?

Those questions may be too important for Mueller to ignore – especially when the Russians are so practiced at the art of government-backed blackmail that they even have a word for it.

They call it kompromat.

And while that might be the first time you've heard that word, for the good of the country, let's hope it's the last.

The Supreme Court hears arguments in two cases. One will address a highly technical but important legal question: How should courts apply Supreme Court rulings in the rare circumstance that they are issued without a majority opinion? The other case the justices will hear will address how far judges can go in reducing the sentences of cooperating government witnesses when federal law dictates a mandatory minimum sentence in such cases...The Nitze School of Advanced International Studies holds a forum on "The State of U.S.-Russia Relations"...George Washington University's Elliott School of International Affairs holds a book discussion on "Russian Roulette," with co-authors Michael Isikoff and David Corn...The National Press Club (NPC) holds a book discussion on "50 Years of 60 Minutes: The Inside Story of Television's Most Influential News Broadcast,'' with author Jeff Fager, executive producer of "60 Minutes."