rWASHINGTON – Headlines come and go at a frantic pace in these frantic days in the nation's capital, but two you might have missed stood out to Kate Brooks.

The first, on March 6, read: "Trump administration quietly makes it legal to bring elephant parts to the U.S. as trophies."

Brooks – who grew up in Niagara Falls and Amherst before embarking at 20 on a life of danger and adventure in the world's war zones – was less than impressed.

"I think it's disgraceful," Brooks, now 40, said over coffee earlier this month as she passed through Washington to show and promote the documentary film she directed: "The Last Animals."

The film tells the story of people around the globe who are trying to save the same sort of endangered animals that are newly endangered by that Trump administration ruling. Over 92 minutes, the firm cascades from the wilds of Africa to zoos in San Diego and the Czech Republic to the Asian trinket shops that sell ivory like plastic, as well as powder made from rhino horns to those who mistakenly think it has magical medicinal properties.

It's a harrowing tale of how mankind monetizes his fellow species to the point of wiping them out and the comparatively few men and women fighting to keep elephants and rhinos alive.

"This film is really raising awareness about the complexity of the supply chain that's claiming the lives of these animals," said Gretchen Peters, executive director of the the Satao Project, which aims to fight wildlife crime sub-Sarahan Africa. "It's not just the poaching issue. It's an entire illegal industry that's developed, and the film presents it in very complete and compelling ways."

"The Last Animals" isn't showing on Amazon, Netflix or in local theaters, but it's having an impact. It kicked off D.C.'s annual Environmental Film Festival at the headquarters of National Geographic, where the kind of enviros who testify before Congress absorbed its message. It's shown at film festivals all over the world, winning an 8.7 rating on IMBD and a perfect score on Rotten Tomatoes. And it raised such a fuss in Asia that Brooks testified before Hong Kong lawmakers on a proposed ivory ban – which they ultimately passed

And then, after all that, Trump's Fish and Wildlife Service decided it was once again OK for big game hunters to fly off to Africa, shoot an elephant and hang the tusk over a mantelpiece.

To Brooks, trophy hunting sends the message that big game is expendable when in reality, major species are careening toward extinction.

And it's largely because people continue to prize ivory. As Brooks' film demonstrates, a 1989 ivory ban essentially crumbed after the UN allowed some exemptions to it in 2002. That reinvigorated a shady new market that carries ivory from the poachers who kill elephants to the criminal cartels that ship ivory around the world to the tiny markets where Asian merchants tried to sell it to Brooks. 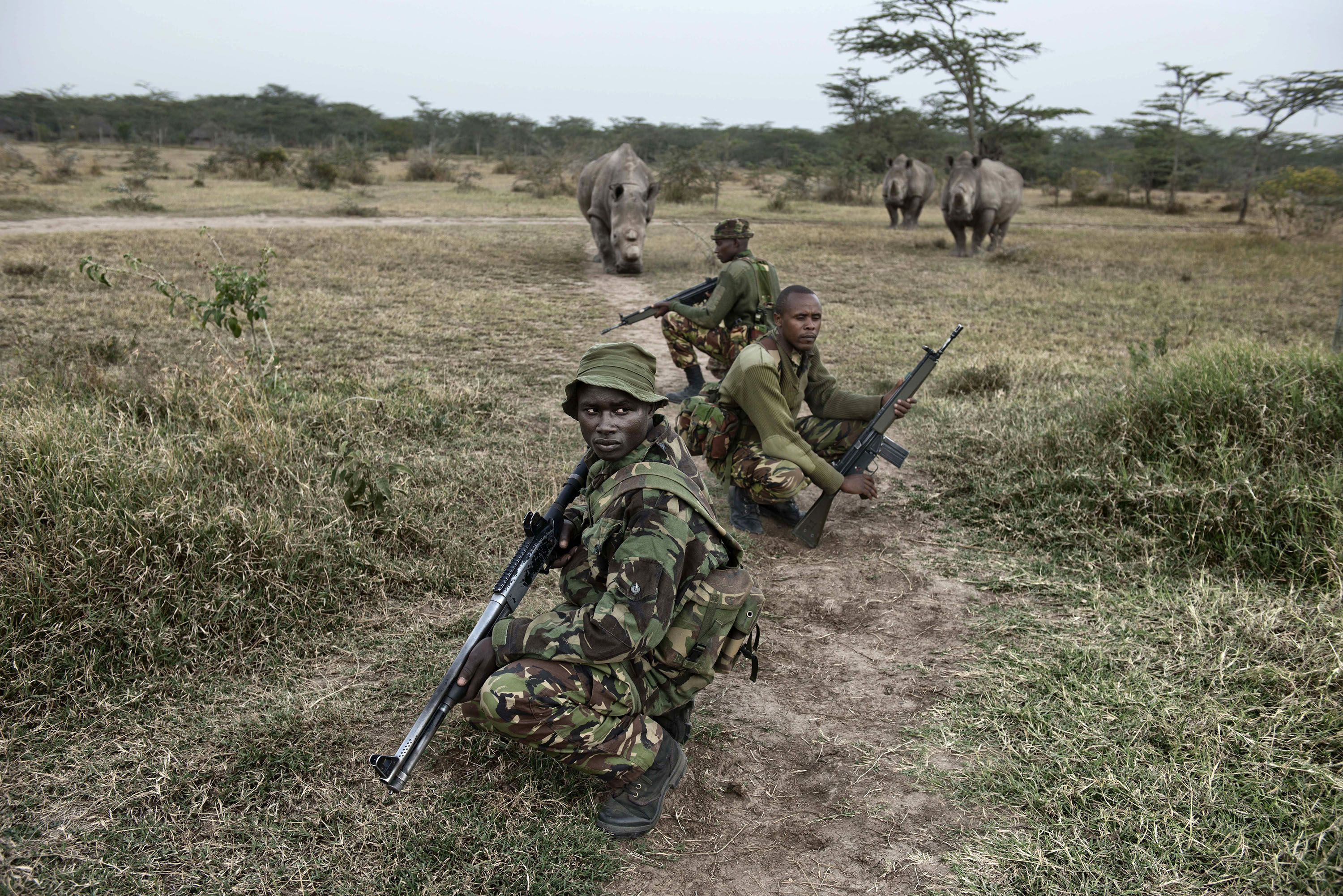 The northern white rhinos at a nature conservancy in Kenya live under the protection of armed guards. (Promo pic for "The Last Animals.")

Trying to stand in the way of it all are soldiers like Colonel Jacques Sukamate Lusengo, who work to protect the elephants in Garamba National Park in the Democratic Republic of the Congo. Lusengo comes across as one of the heroes of Brooks' story, fighting danger every day as he leads his men through the park in search of animal killers.

Eventually, the killers fought back, murdering Lusengo and three of his soldiers in 2015.

Hearing the news, "I just broke into tears," Brooks recalled. "I was devastated."

That's just one of many devastating moments Brooks lived through during the five years it took to make and market "The Last Animals," her first film.

Ironically, she started work on the film through a moment of escape from devastation. She got hooked on photography at the George Washington University, where a semester in Russia led to years spent shooting everything from a Russian election to the harrowing conditions in Russian orphanages.

Then 9/11 turned Brooks into a combat photographer. For a decade, she traveled through Afghanistan, Iraq and other troubled corners of the Middle East, documenting the wars for publications ranging from Time to Newsweek to the New York Times magazine. Afterwards she published a book,  "In the Light of Darkness: A Photographer's Journey after 9/11."

But war wore her out and left her seeking solace on a vacation in Africa – where, one day, she suddenly saw a herd of elephants walking by.

"It was a reminder on a cellular level that despite all the destruction, there was still some order in the world," Brooks said.

So she set out to preserve that order through film. Starting with a fellowship at the University of Michigan, she sought funding to tour the world and show the struggle a handful of scientists and soldiers face as they try to preserve endangered species.

For example, she showed zoologists in Kenya struggling mightily to try to get the endangered northern white rhino to reproduce. Reduced in numbers to the single digits after decades of poaching, northern white rhinos depended on just a handful of humans trying to save the species.

"It's a sad day on planet earth," she said via email before flying off to Brussels to screen her film before the European Parliament.

Congress is in a two-week recess, until April 10...The Supreme Court issues orders and hears arguments in two cases: One that will determine whether accused criminals can be kept in shackles, and another on the rules guiding class action lawsuits...The Woodrow Wilson Center's (WWC) Canada Institute holds a forum on "Canada-U.S. Border Transportation Innovation in the Age of America First: Moving Beyond Preclearance"...The Hudson Institute holds a discussion on ''U.S. in a Post-ISIS Iraq and Syria: Realigning Allies and Constraining Adversaries."