On an unseasonably warm night in March 2012, Patricia John and her boyfriend, Kenneth Van Aernam, parked their car on the old Red House Bridge over the Allegheny River in Cattaraugus County. Hand in hand, they set out for a moonlight stroll.

It turned out to be their last happy moment together.

After taking a few steps, John fell through a gaping hole in the poorly maintained bridge, plummeted 25 feet into the shallow river and pulled Van Aernam through the hole with her. The 47-year-old Seneca Nation woman, a mother of three, drowned there. Van Aernum, then 43, broke his leg in the fall. After screaming John's name and trying without luck to find her, he staggered out of the water and went to a nearby home to call 911.

Nearly six years later, lawyers for Van Aernam and John's survivors are preparing for a trial in the state Court of Claims, alleging the state Department of Transportation officials did not properly maintain the bridge.

"This bridge was a death trap … an accident waiting to happen," said attorney Joel L. Daniels, who represents Van Aernam. "The state built this bridge and ultimately abandoned it. They walked away from their responsibilities to maintain it. They've talked about building a new bridge for years, but they've done nothing."

The March 30, 2012, accident happened in the small town of Red House, 68 miles south of Buffalo and about 7 miles southwest of Salamanca. According to the Cattaraugus County Sheriff's office, the hole that John fell through was more than 10 feet long and almost 3 feet wide in several places. Police said the road leading up to the bridge is known as Old Route 17.

What they don't agree on is who is to blame.

Seneca Nation officials contend that repairing and maintaining the bridge has always been the legal responsibility of the state, which built the bridge on Seneca land in 1930. In a decision issued on Feb. 9 by the Fourth Department of the State Appellate Court, judges agreed with the Senecas, ruling that the bridge is the state's responsibility.

"Although the Seneca Nation is the primary governmental authority on the Allegany Territory containing the Red House Bridge, it was not responsible for the maintenance and repair of the Red House Bridge," said Carol E. Heckman, an attorney for the Senecas, in court papers. "This obligation fell on the State of New York" based on a state highway law and on agreements made between the tribe and the state in 1976 and 2007.

But attorneys for the state argue that leaders of the Indian tribe have made it difficult, if not impossible, for state transportation workers to maintain the bridge on the Senecas' sovereign territory.

The Seneca Nation has "challenged and disputed" the Department of Transportation's authority to "construct, maintain, inspect, close or demolish bridges within the Nation's territories," said Peter B. Shawhan, an attorney for the state DOT. "The Seneca Nation did not allow for emergency entry onto its land without prior written permission, no matter how dire the danger posed by or on the bridge." 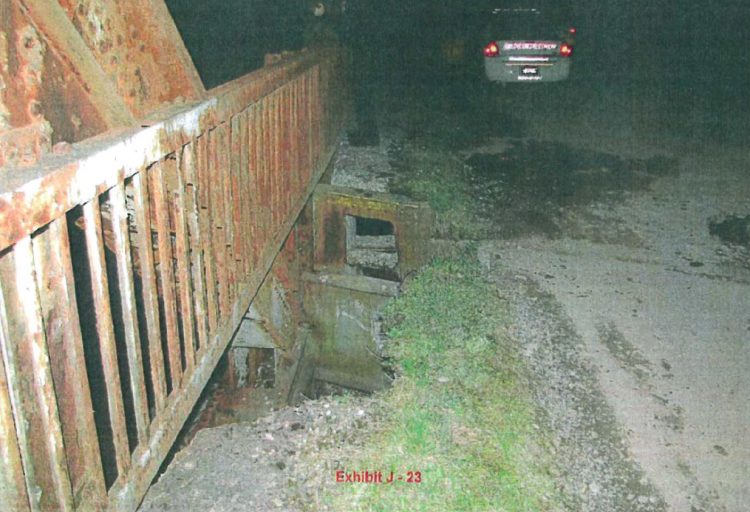 Lawyers agree the condition of the old Red House Bridge over the Allegheny River in Cattaraugus County is decrepit.

A trial will be held in September before Court of Claims Judge Michael E. Hudson to determine whether the state was negligent, and if so, what damages are owed to Van Aernam and John's survivors. So far, attorneys have not sought a specific damage amount.

"The bridge was in deplorable condition when this happened. It was a real tragedy," said Cattaraugus County Sheriff's Office Capt. Shawn M. Gregory, who has been at the bridge many times. "Officially, it is a closed bridge on a closed road. But people use the bridge all the time to get over the river. Locals use it, and many fisherman use it, because there is excellent fishing out there."

Deputies are occasionally dispatched to the bridge to investigate loud parties or other incidents, Gregory said.

After the death of John, someone covered the gaping hole that she fell through with a large steel plate, Gregory said. He added that he doesn't know who put the steel plate there – the Seneca Nation, state DOT or someone else.

"It's a shame that there had to be a tragedy out there before someone put a plate over that hole," Gregory said.

John and Van Aernam had lived together for 12 years and had one child together, their attorneys said. They lived on Seneca Nation land not far from the bridge. Their attorneys said John was a volunteer firefighter who worked in the Seneca Nation's health department. She was also nearing the completion of studies in medical coding.

Van Aernam, who could not be reached to comment for this story, is unemployed.

According to court papers, the couple had spent the day at a family barbeque before the accident, and state attorneys have argued that alcohol they consumed at the barbeque may have been a contributing factor in the accident.

There is no evidence that either John or Van Aernam had anything more than a few social drinks at the event, said Laurie A. Baker, who represents Van Aernam as Daniels' co-counsel. Cheryl Meyers Buth, who represents John's family, agreed.

"There is no evidence that they were impaired or inebriated," Baker said. "These were two people who stopped on a bridge on a very nice night, and decided to go for a short walk. The real issue here is that the state had abandoned this bridge for decades. There were no lights on the bridge, no warning signs, nothing to stop anyone from going up on that bridge."

The accident and its aftermath have been a "nightmare" for Van Aernam and John's family, which includes a son, two daughters and a young granddaughter, Baker said.

For several years before John's death, state DOT officials had discussed tearing down the Old Red House Bridge and building a new one, Daniels said. He said the state had done some early site work and had drawn up plans for design of a new bridge, which would have cost as much as $11 million, according to an estimate done in 2007.

But 11 years after that estimate – and six years after the death of Patricia John – the state has yet to begin rebuilding the bridge, which is 487 feet long and 28 feet wide.

The Buffalo News asked Seneca Nation officials for their response to Shawhan's allegation that the Senecas have made it difficult for state DOT workers to access the bridge to inspect it.

"The Seneca Nation is in agreement that the bridge should be fixed," Seneca President Todd Gates said in a statement emailed to the newspaper. "We have seen firsthand the tragic circumstances that the deteriorating conditions can cause. While we wait for NYSDOT to include the repairs on its list of priority projects, we have been unable to have meaningful discussion w/DOT representatives for some time. The condition of the bridge needs to be addressed."