The 170th anniversary of the seemingly impossible is in a few days. In 1848, there was a moment when Niagara Falls basically stopped. It was not due to manmade dams but to a freak act of nature, a transformed vista almost impossible to envision today.

Paul Gromosiak, the great student of Niagara history, is still the guy to best help you to see it.

Sit with Gromosiak, and he tells you how the constant surge of water turned into a relative trickle around midnight on March 29, 1848, how one astounded correspondent of the time described the way the usual roar "subsided almost to a moan."

Gromosiak relates how everyday people, stunned and curious, poured into the muddy area at the base of the precipice, exploring caverns and crannies never reached by human beings. He explains how local business owners quickly stifled their disbelief and instead grabbed a dollars-and-cents opportunity, sending dynamite crews to blast away rocks that blocked nearby canals to the river, and blow up boulders – usually hidden by the water – that were a hazard for the Maid of the Mist boat rides.

From Dale Anderson: The day Niagara Falls all but stopped

A massive ice jam near Buffalo had all but shut down the river, an ice jam powerful enough to hold back a Great Lake. It finally burst loose a day later with "a tremendous sound, almost like an explosion," Gromosiak said.

The water came hurtling down its channel with a vengeance. About 30 hours after the falls was reduced to "nothing more than a mere mill dam," in a violent torrent of flood and ice, Niagara reclaimed its rightful spot.

When Gromosiak tells the tale, you almost smell the mud and hear the dripping water. Not so long ago, he might have gone to Goat Island during this week to honor the anniversary and explain it for curious visitors. He used to hang a sign on a tree that read "Local historian will answer your questions" and tell his stories to anyone who happened to pass by.

Gromosiak figures he spoke to 40,000 people over six years. Their most common question? The height of Niagara Falls, which really had two answers: The American Falls is around 190 feet, Gromosiak said, while the Horseshoe Falls rises to about 160 feet.

Yet his situation has changed. Walking the trails of Goat Island is no longer an option. He is as close to the falls as he is able to be, living in a room at the Schoellkoepf Health Center at the Niagara Falls Medical Center on Tenth Street.

Three years after learning he had symptoms of Parkinson's Disease, it is difficult for Gromosiak to get around without a wheelchair, and the use of his arms is limited.

What he has is his voice, and his mind, and his stories.

"I sleep well," said Gromosiak, who often dreams about the falls. 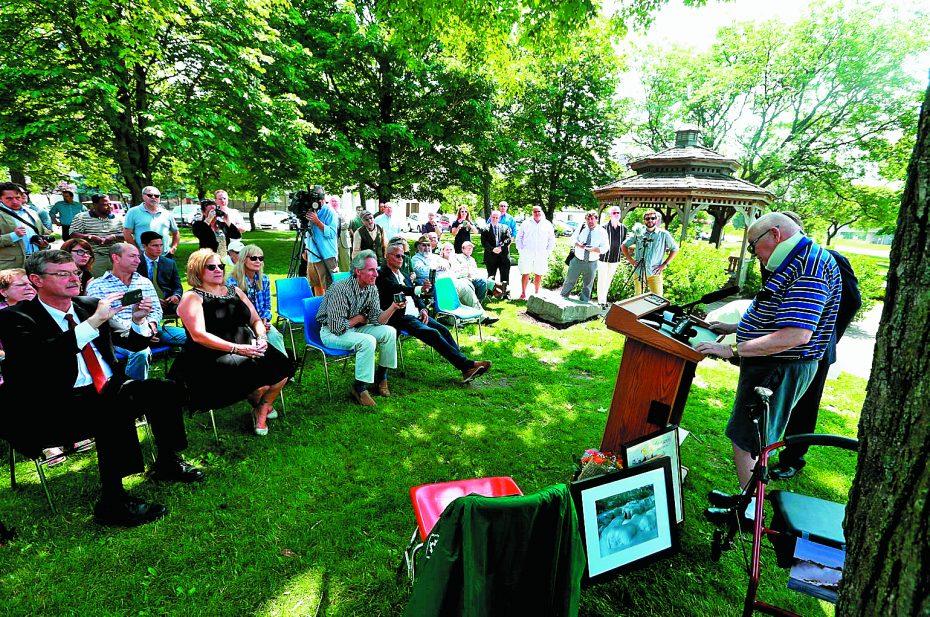 Paul Gromosiak is honored at a surprise event by local officials, friends and family at Heritage Park in Niagara Falls in 2015. (John Hickey/The Buffalo News)

He remains a bottomless source of information about Niagara, for visitors and journalists from around the world. "He knows the falls as well as anyone," said Helga Schultz, who has worked for 20 years as a clerk in the Niagara Falls Public Library's local history department. They became friends. To Gromosiak, since childhood, those rooms served as a second home.

His father was a night watchman at the old Moore Business Forms. Gromosiak remembers how his mother would take her children shopping along Falls Street, during its boom days. When they were finished, they would take a walk to see the falls.

Gromosiak fell in love with the rapids, with Goat Island, "with the whole damn thing."

Sean Kirst: Decades later, ripples from one life saved, maybe by a single step, at Niagara

Before long, he was heading to the library to learn the stories. He knows about the tragedies, the miracles, the last-second rescues. He can describe how a scow got stuck in the river a century ago, how it seemed certain it would carry two men to their deaths – but they were saved, and the rusty scow remains there today. He will tell you of Tesla, the hydroelectric genius, or the many luminaries who often stayed in the Hotel Niagara.

All of that came from countless hours at the library.

He grew up to become a math teacher at Niagara Falls High School. The lore of the falls was a quiet passion until he retired 28 years ago, when he finally had time to give it his full attention. He had no wish to go on exotic vacations. He was happy staying home to document the historic glory of Niagara. He wrote 12 books and spent much of his time on Goat Island, or walking the gorge.

Gromosiak still calls the park "the Niagara Reservation," because that name best captures intention of its designer, Frederick Law Olmsted, the legendary landscape architect. The hope of the community, Gromosiak said, lies in honoring that vision.

Olmsted, he said, believed you should be able to walk Goat Island without knowing there was a business district across the river, that it should be as close to the primal forest as possible, that you ought to come upon the falls in all their majesty from a quiet woodland path.

In that instant, Gromosiak said, the mist and the roar and the green sheet of falling water should transcend helicopter rides or sightseeing towers or wax museums. He feels there is too much commercial clutter on the island.

At 75, the walls of his room are covered with clippings and honors – a few years ago, state and local officials honored him with a plaque in Niagara Heritage Park – but he has a sense of urgency about whatever happens next. He has dreamed for years of a new experience center featuring holograms that would show the falls and gorge as they were at different points in time, all of it involving a basic hope.

The central mission of his life lies in reclaiming a sense of wonder that is all too often lost.

Go there at dawn, Gromosiak said, when the rising sun creates a rainbow, when the sounds of the city are at a minimum, and you'll understand the soul of Niagara – a dimension that is routinely overwhelmed.

"All these other things are major distractions," he said. "At dawn, it's just you and the natural world."

Sean Kirst: The essence of Niagara, revealed at sunrise

At the nursing home, he refuses to surrender hope. He spends much of his time reading, and he said he is a terror at group trivia games. Old friends often visit, including Mayor Paul Dyster, and Gromosiak is working on another book, tapping patiently at his old electric typewriter.

The theme is what Niagara Falls could be in the future, which he said comes down to one fundamental truth. To move ahead requires looking back, he said, not in the sense of repeating classic municipal mistakes but in remembering the awe that once brought people to his town:

"It's the sounds, the rapids, the falls, the birds, the wind, so many natural sounds, all happening at once."

To feel Niagara, he said, you need to stop and listen.

In his room, eyes closed, that is what carries him back.