The students gathered in their assistant principal’s office at East High School on Thursday had all heard about the boy who had been shot and killed a few blocks away from their school the previous afternoon.

Some of them wondered if anybody else had.

He has a theory about why: “It’s a black male who got shot.”

Brian is among 18 students from Pathways who went to Washington, D.C., on Saturday to take part in the March for Our Lives, organized by the student survivors of the mass shooting at Marjory Stoneman Douglas High School in Parkland, Fla., that left 17 students and staff dead. The youth at Pathway, a school within East that works with students to help them graduate on time, went to support the Florida students who want a national ban on the sales of assault-style rifles and high-capacity magazines and want to close loopholes about sales of firearms at gun shows and on the Internet. 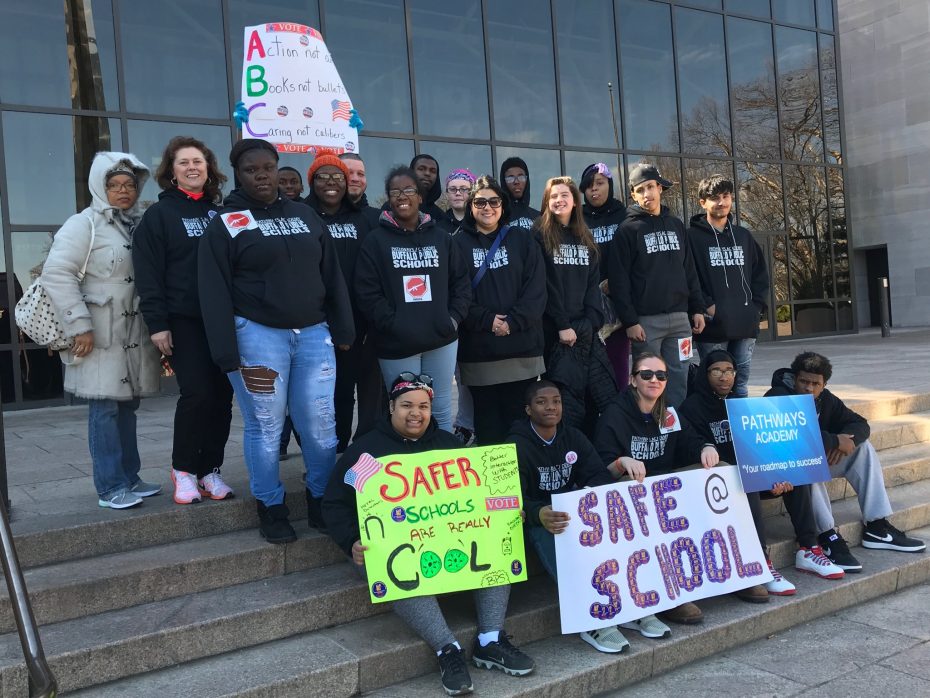 But the students in Buffalo, where last year 24 youths under the age of 18 were shot, also wanted to call attention to the day-to-day violence in their communities. They are joined in their quest to broaden the national dialogue about gun violence by victims' families, doctors who see the damage to young bodies, politicians and community activists.

Murray Holman, executive director of the Stop the Violence Coalition, who helped chaperone the Pathway students, said he wants to make sure the simple message of young people from communities of color is heard.

“Guns hurt. Guns hurt. That’s it,” said Holman, who was recently honored by the FBI Buffalo for his years of work in trying to get young people away from gang and street violence. “Urban. Rural. It doesn’t matter. Guns hurt.” 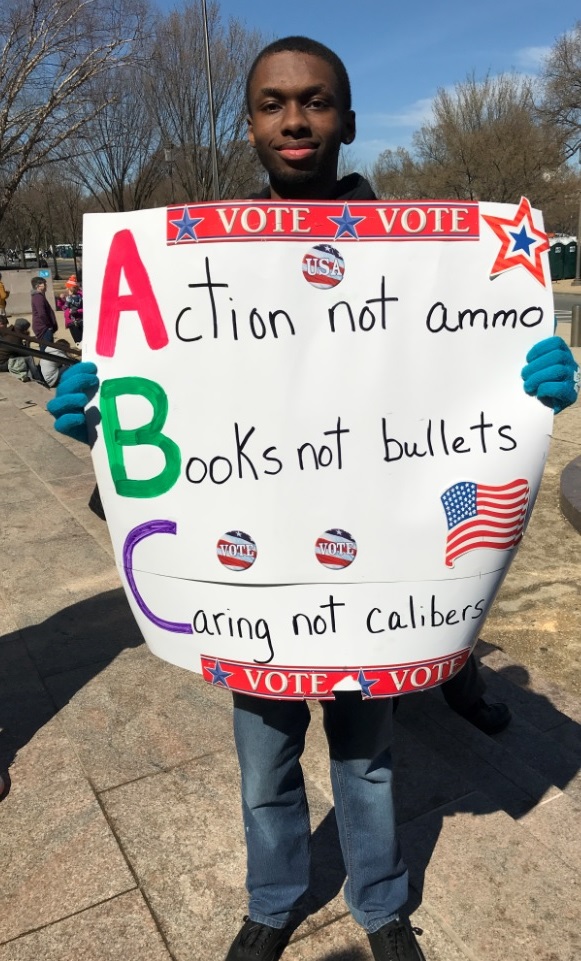 Monterry Williams, a senior at Buffalo’s Pathways Academy, brought a strong message with him to the March for our Lives in Washington Saturday. (Jerry Zremski/Buffalo News)

While violent crime has decreased in Buffalo and across the nation in the last two decades, shootings remain commonplace.

More than 16,000 youths under age 20 were killed or injured by a gun in 2014, according to a report by the Brady Center and Campaign to End Gun Violence. Of those, 2,549 died. More than half of the deaths – 57 percent – were classified as homicides. Just over a third were suicides. Four percent – 106 – were the victims of unintentional shootings.

Last year in Buffalo, 237 people were shot in 202 separate incidents, according to the Buffalo Police Department. Twenty-four, or one out of 10 shooting victims, were under the age of 18.

In the first two months of 2018, 23 people were shot in 21 incidents in Buffalo, one fatally. One of those wounded was under 18.

Buffalo police have focused on getting illegal guns off the streets, Mayor Byron W. Brown said, pointing out that during his tenure as mayor, the city has collected more than 16,000 guns.

But Brown acknowledged that more needs to be done to stop senseless killings, like the death of the 17-year-old boy, which was followed Thursday by a second fatal shooting of a 26-year-old man.

"Those are young people. That gun violence is tragic. It’s senseless," the mayor said. "I agree with our young people that it must be stopped in all of its forms."

A public health threat to children

As a pediatric surgeon, Dr. Kathryn Bass, director of the Pediatric Trauma Center at Oishei Children’s Hospital, has seen up close the devastating impact of a gunshot wound on a child’s body.

“Children are very resilient,” she said. “But the amount of damage that can be invoked with a bullet to a chest – the blast injury of a bullet to the chest – is much more devastating in a smaller compartment. And that’s what happens in a child ... Things are closer together.”

“We come to work every day to save lives,” Bass said. “When we lose a child, especially to something like violence, like firearm injury, it’s devastating. These are completely preventable.”

On March 20, Bass joined her colleagues in announcing their support for the March for Our Lives in Buffalo, inviting patients and their parents to march with them in Niagara Square on Saturday. The American Academy of Pediatrics and the American Pediatric Surgical Association have labeled gun violence a public health threat to children and demand stronger gun legislation and ways to prevent children from accessing guns. The doctors' announcement came moments after news broke about a school shooting in Maryland. 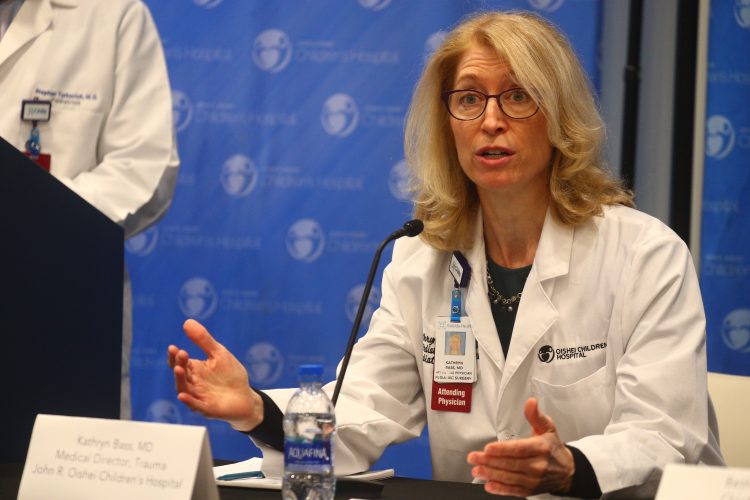 “The mass shootings get the mass attention,” Dr. Bass said.

But it’s single acts of homicides, suicides and cases involving children playing with guns that are claiming the most lives, she pointed out.

Not that schools here are immune.

“We certainly have to prepare for it,” Bass said. “The idea that we don’t see it in Buffalo is an ignorant position. It could happen tomorrow.”

After the shootings in Florida, young people in Buffalo began joining the student survivors' rallying cry that #EnoughIsEnough."

New Yorkers Against Gun Violence and the WNY Peace Center, joined by Stop the Violence Coalition and the Buffalo Parent Teacher Organization, held a candlelight vigil March 1 at St. Paul's Episcopal Church in downtown to commemorate the lives lost in mass school shootings. 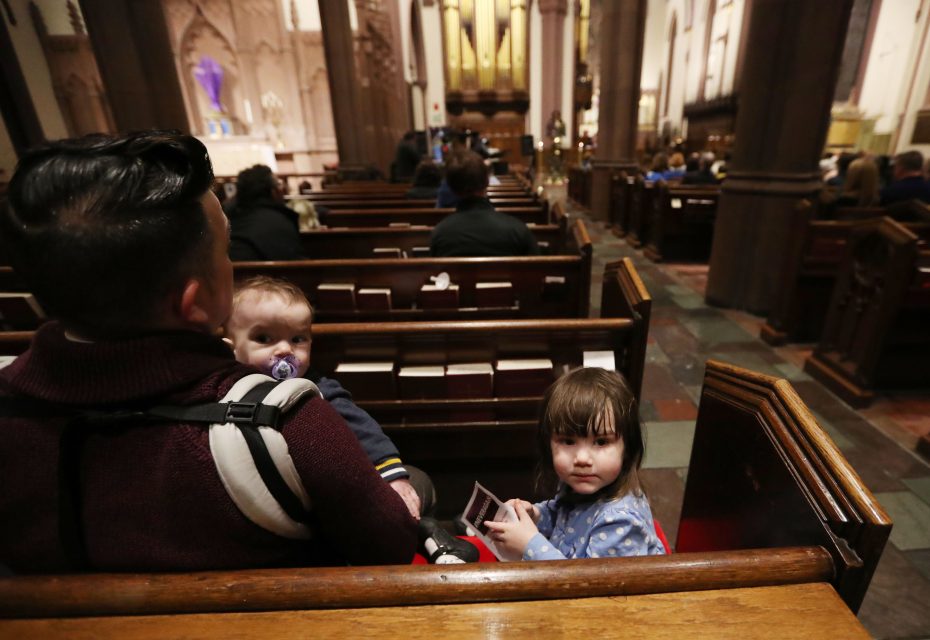 Twenty different organizations came together to commemorate all those students lost to gun violence from Columbine to Sandy Hook and Parkland in a candlelight vigil at St. Paul's Episcopal Cathedral on March 1, 2018. (Sharon Cantillon/Buffalo News)

On the one-month anniversary of the shootings, thousands of students in Western New York participated in a variety of events, from walk-outs and marches to assemblies and moments of silence.

And as plans for the Washington, D.C., march were announced, anti-violence groups began organizing a rally and march in Buffalo with the mayor.

'This is our civic duty': Buffalo-area teens join gun control march in D.C.

Sharon Dobkin, of Write to Resist, a postcard writing group, wanted to find a way for young people in Buffalo and its suburbs to go Washington for the march and organized the buses with the help of New Yorkers Against Gun Violence and the WNY Peace Center.

She hopes that by bringing city and suburban youth together on the bus and at the march, their voices will be heard. "That's when change is going to happen," she said.

Kelly Kane, a social studies teacher at Pathway, showed a logo that her students designed for buttons and hoodies they took to the march.

"It's all connected," she said. 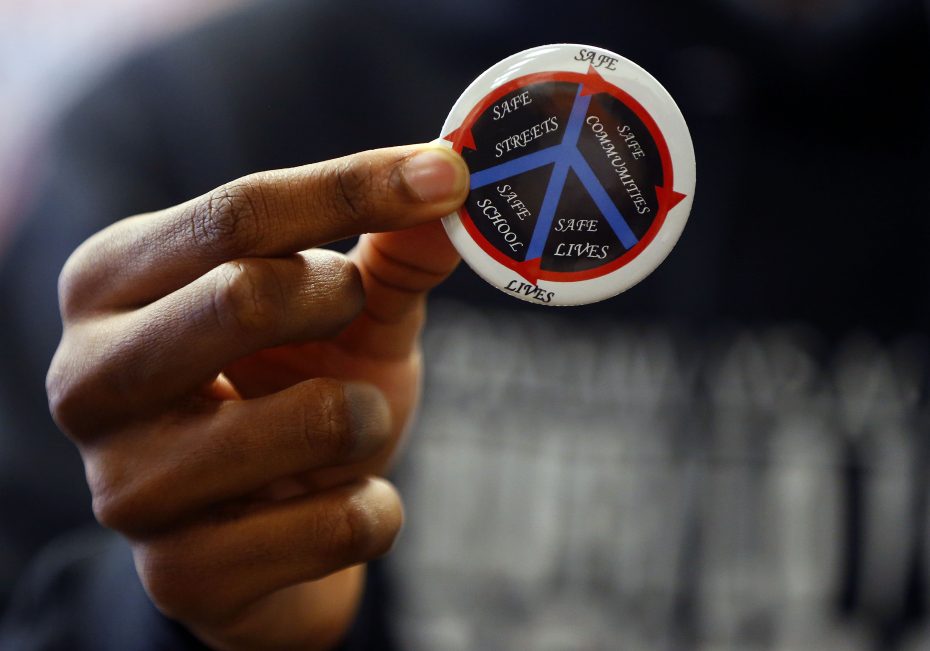 A pin that was designed by students at Pathways Academy at East High School in Buffalo. (Mark Mulville/Buffalo News)

After plans for the March for Our Lives were announced, her students started talking about wanting to go to D.C. Kane set up a Gofundme page to help pay for their trips and she had students write essays to show why they wanted to go to the march.

Four of the students shared their thoughts about gun violence.

Brian O'Steen said he wanted to be part of the march because gun violence of any sort shouldn't be normal. "Nobody should worry about sending their kid to a school or to a party," he said.

Morgan Updegraff, 17, a 10th grader said she believes "gun violence is out of control." She recounted an event two years ago when she was inside her home near the University at Buffalo South Campus when she heard a commotion outside the window. She heard someone say "Give me your money" and then she heard a gunshot. "I was scared," she said. "I ran to my mom's room. I almost fell."

Kane marvels at how her students have become engaged in their school work, especially in her Participation in Government class. "They're excited to come to school," she said. "This is what you get into teaching for."

Maria Conrad, the assistant principal and administrator of Pathways, said she couldn't be prouder.

"Miss, do you think we're going to be in the history books 20 years from now?" Conrad said one of the students asked her.

They're already getting some attention. Mayor Brown made a personal donation to help fund one of the buses going to Washington and the Buffalo Teachers Federation announced it would reimburse the Gofundme. 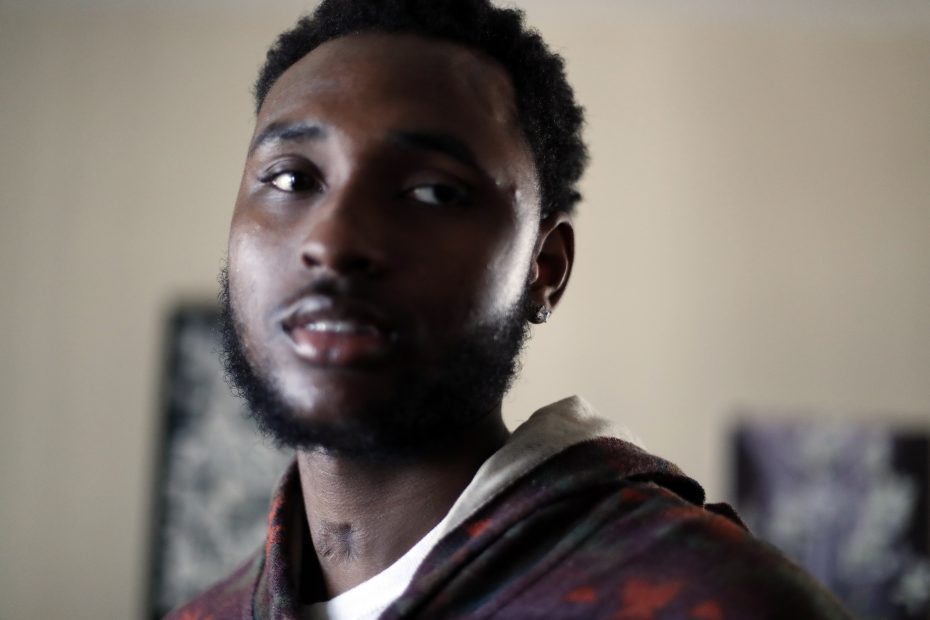 Kameron Rashada with a tracheotomy scar from a gunshot in 2015 that left him partially paralyzed on the right side. The shooting also affected his cognitive abilities and his speech. (Mark Mulville/Buffalo News)

Rhonda Rashada keeps a photo on her cellphone of her son, Kameron, lying in a hospital bed at Erie County Medical Center, the victim of the kind of violence seen all too often in Buffalo.

“I save it for him to let him know how far he’s come,” Rhonda Rashada said.

On the night of May 8, 2015 – two days before Mother’s Day – Kameron was shot while at a party. The bullet hit him in the right shoulder, traveled through his neck and went into the right side of his head. When his mother arrived at the hospital, doctors said they weren’t sure her son, a basketball player at Health Sciences Charter School, would make it through the night.

He did, although the gunshot wound left him partially paralyzed on his right side. The injury also affected his cognitive abilities and his speech.

After eight months of hospitalization and physical therapy, he was back home and able to walk again. “Don’t give up,” Kameron Rashada said he kept saying to himself in the months after the shooting. He went back to school and received a certificate at the end of 12th grade. “He was able to walk across the stage,” his mother recalled.

But the nightmare returned on Nov. 18, when Kameron Rashada joined some friends on a party bus. As they were getting off the bus that night someone opened fire on the crowd. Kameron’s friends scattered but he couldn’t run because of his paralysis. He took a bullet to his backside, which he couldn’t feel, his mother said. His friends took him to the hospital. He was luckier this time – the bullet didn’t hit any organs and he was home within two months.

Kameron Rashada, now 20, doesn’t hang out with those friends anymore and he’s eager to get a job and gain some independence.

He calls Murray Holman every day. “I need a job,” he says.

Holman and Rashada’s family hope to find him work as a greeter at a store.  “Walmart!” Kameron Rashada suggested. Holman asked anyone interested in hiring Kameron Rashada to call Stop the Violence at 716-882-7882.

His mother would love to see him make that step forward in his recovery. “As a young man, he’s stuck,” Rhonda Rashada said.

She hopes that the marches and ongoing conversation about gun violence include the stories of people like her son's.

“No mother,” she said, “should have to go through the pain and suffering of their kids.” 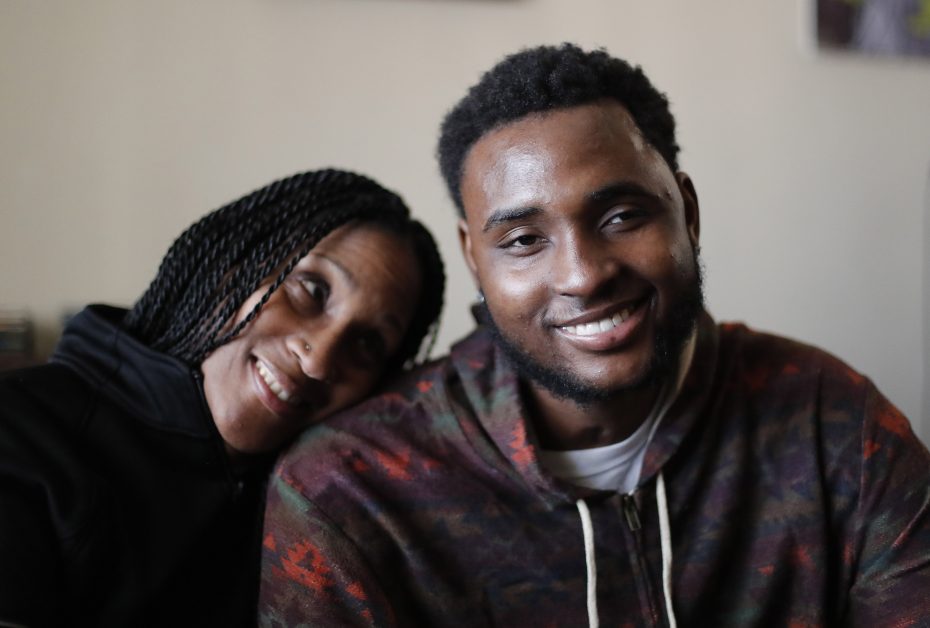