ROCHESTER – A former president and secretary of state joined dozens of lawmakers and 2,000 other people from all walks of life here Friday to celebrate the life of a coal miner's daughter who rose to become one of the most powerful women ever to serve in Congress.

A week after Rep. Louise M. Slaughter died at the age of 88, Hillary Clinton, House Democratic Leader Nancy Pelosi and Rep. John Lewis joined members of Slaughter's family in offering tributes to the late congresswomen in words that reflected her passion as well as her humor.

Meantime, former President Bill Clinton looked on solemnly until the joyous ending of the 135-minute service, when the AKOMA African American Women's Gospel Choir led the audience in singing "I'll Fly Away."

A celebration of Slaughter's life as much as a remembrance of her accomplishments, the service in the gilded-age Kodak Hall at the Eastman Theater saw one speaker after another delivering the same message:

Louise was special, a determined fighter who broke down barriers and got things done with a rare combination of smarts and good humor. 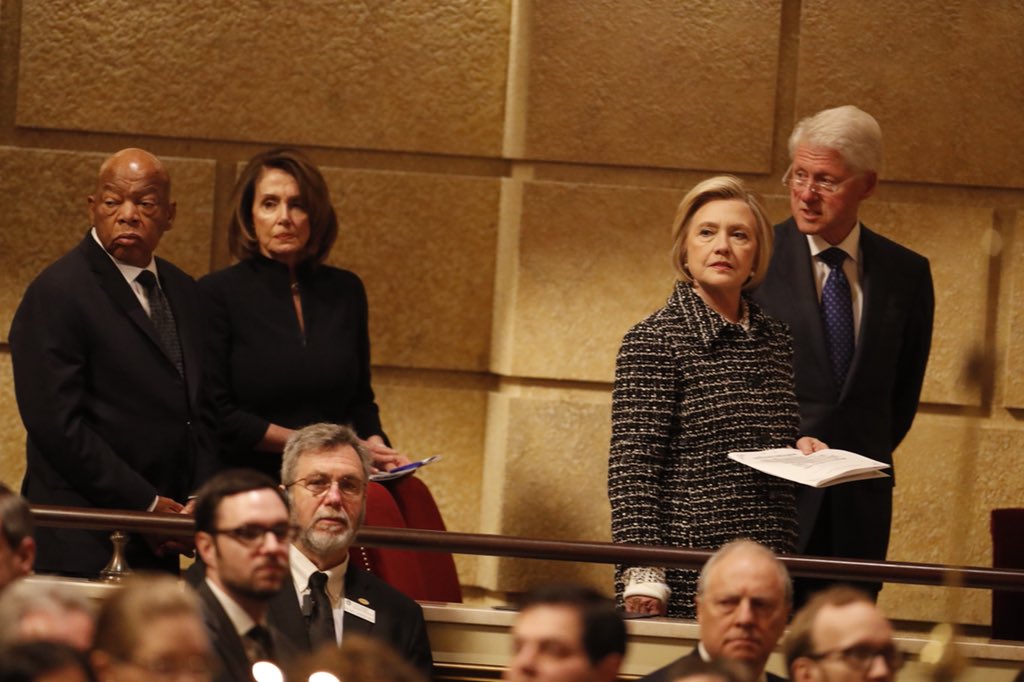 Agreeing with Lewis's sentiment that it was hard to eulogize someone as beloved as Slaughter, Hillary Clinton said: "It's hard because of what she represented and who she was ... but also because we need more Louise Slaughters today."

Clinton, a former secretary of state and New York senator, also appeared to take a veiled shot at Donald Trump, the Republican who defeated her in the 2016 presidential race.

“Louise always stood up for science and facts," Clinton said. "What an unusual point to take in these times.”

Pelosi took a serious turn talking about Slaughter's scientific bent. A microbiologist by training, Slaughter forced the passage of a landmark bill banning discrimination on the basis of one's genetic code after teaching members of Congress that medical innovation depended on such legislation, the California Democrat noted.

"She was a visionary," Pelosi said of Slaughter. "We learned a lot from her."

Pelosi lauded Slaughter as an accomplished legislator who not only helped push the Affordable Care Act to passage, but who also wrote landmark congressional ethics legislation that bars lawmakers using their position to profit in the stock market.

"Louise believed deeply in her heart that government could help people," Pelosi said. "I think that is why she continued to serve."

Meanwhile, Lewis noted how difficult it was to disagree with his longtime friend.

"She was strong," said Lewis, a Democrat from Georgia and a civil rights era hero. "She was solid. And she didn't take any guff."

Slaughter was also a hoot, as several speakers noted. Clinton said Slaughter – who was as famous for her Kentucky drawl – occasionally greeted her with the words: “Honey, I missed you like a front tooth!"

And Pelosi noted that recently after a Rules Committee meeting, Slaughter laced into a profanity-filled rant about something she didn't like only to be interrupted by Rep. Jim McGovern, a Massachusetts Democrat who reminded her that she was sitting before a live microphone.

Slaughter, a Democrat from Fairport who served the Rochester area in Congress for more than 30 years and the Buffalo area between 2003 and 2012, died about a week after a suffering a fall and a concussion at her Washington home.

She was the first woman to head the House Rules Committee, which sets the terms of debate on legislation moving to the House floor, and Pelosi said appointing Slaughter to that post was one of the joys of the four years she served as House speaker. 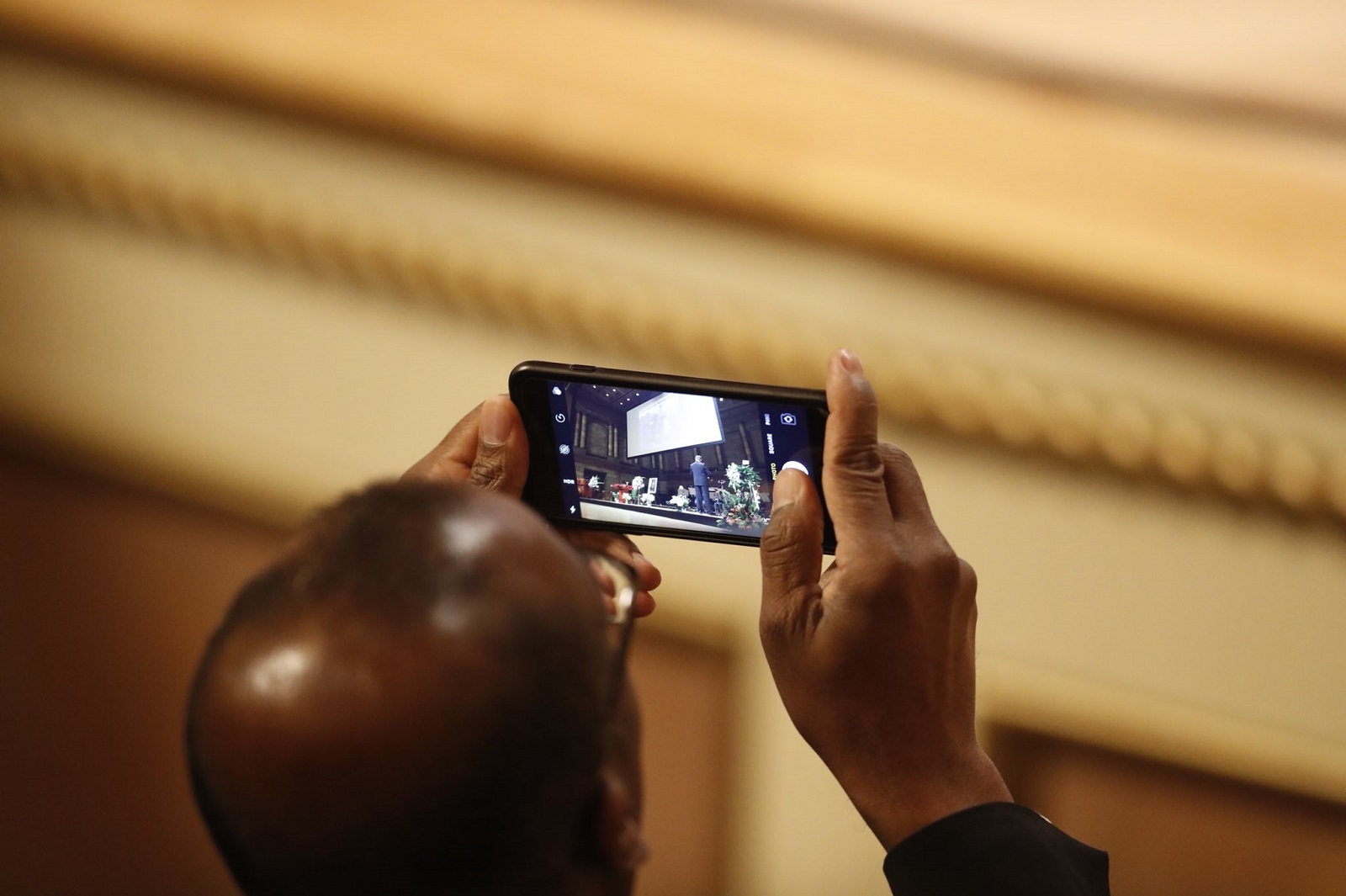 Mayor Byron Brown takes in the scene around him Friday at funeral services for Rep. Louise Slaughter in Rochester. (Mark Mulville/Buffalo News)

And while the dignitaries dressed in black, the larger crowd was a mix of men and women in business attire and those in sweaters and jeans. The ceremony was open to the public, and by midmorning, hundreds of Slaughter's constituents stood in line in the cold waiting to enter the theater.

Once they did, they witnessed a ceremony filled with Christian scripture and loving memories.

The music was as eclectic as the crowd. The Eastman Wind Ensemble and the Eastman Chorale performed, as did that gospel group and the Ginger Majority, a bluegrass band that played an interlude that echoed of Slaughter's native Kentucky.

Slaughter's daughter, Amy Slaughter, told of what Kentucky was like for her mother. Louise Slaughter's father toiled away as a coal miner and a blacksmith, and the family lived without electricity until the Tennessee Valley Authority strung a single light bulb into their home's kitchen.

"She came from humble roots — but she was outspoken," Amy Slaughter noted.

Slaughter's grandson, Daniel Secatore, noted that Slaughter and her husband Bob were so poor when the family moved to the Rochester area that Secatore's mother -- Slaughter's baby daughter at the time -- slept in a drawer.

That was early in a life that eventually would come to seem like the American dream come true, Secatore said.

"Today she is mourned by presidents," he added.