Dos Amigos restaurant, on the Lake Erie shore in Hamburg, has emerged from a three-month shutdown with new décor and a menu that's lost most of its Mexican accent.

The operators of Lucia's on the Lake debuted a deep Mexican menu at Dos Amigos, 3800 Hoover Road, last June.

"We didn't know how ambitious it was, and it was hard to get the food out," said operating partner Angelo Canna. "So we changed the menu, and now it's a lighter Lucia's with Mexican sprinkled in."

The refocused lineup has steaks, and at the urging of numerous customers, more seafood, as befitting its waterfront location, said Canna. Offerings include a 14-ounce bone-in filet ($42), seafood paella ($28), and a jumbo haddock fish fry ($16).

There's also dishes that graduated from Lucia's to Dos Amigos. Lucia's fans who miss the lobster mac ($18) and steak sandwich with bacon jam and Dutch blue cheese ($18) can find them down the street now.

Remodeling included more couches and firepits on the patio. Read more about Dos Amigos' waterfront patio in this cover story from 2017. Inside, reclaimed barn wood and booths have been added, plus new floors and bathrooms.

"We were an Italian restaurant trying to make Mexican food," Canna said. "Some people got it, some didn't. Now after the remodel, we're roaring."

*Look back at the food from the previous iteration of Dos Amigos, and stay tuned for a gander at the new menu:

Starters: From Dock at the Bay to Dos Amigos 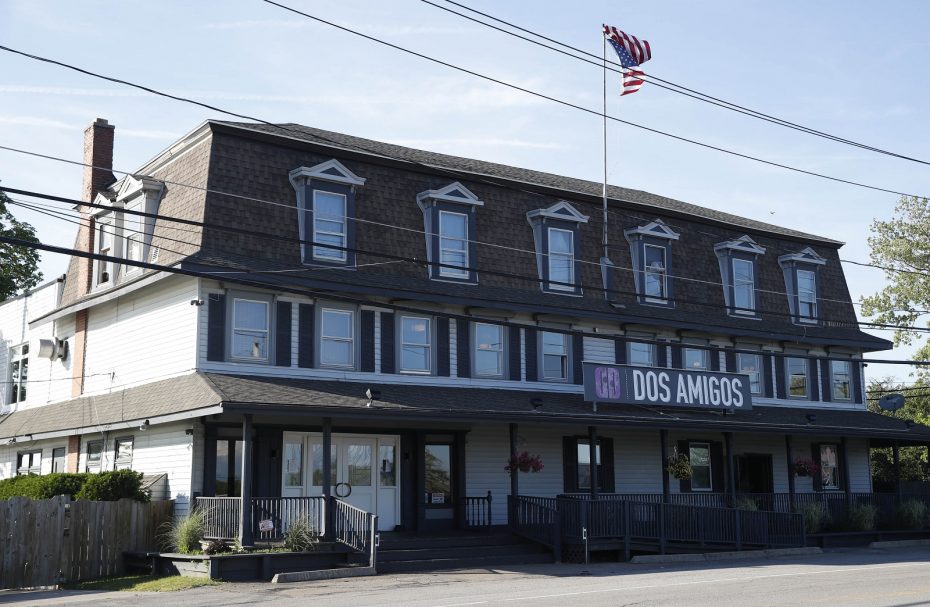 Dos Amigos at 3800 Hoover in Blasdell has a giant patio on Lake Erie. (Sharon Cantillon/Buffalo News)