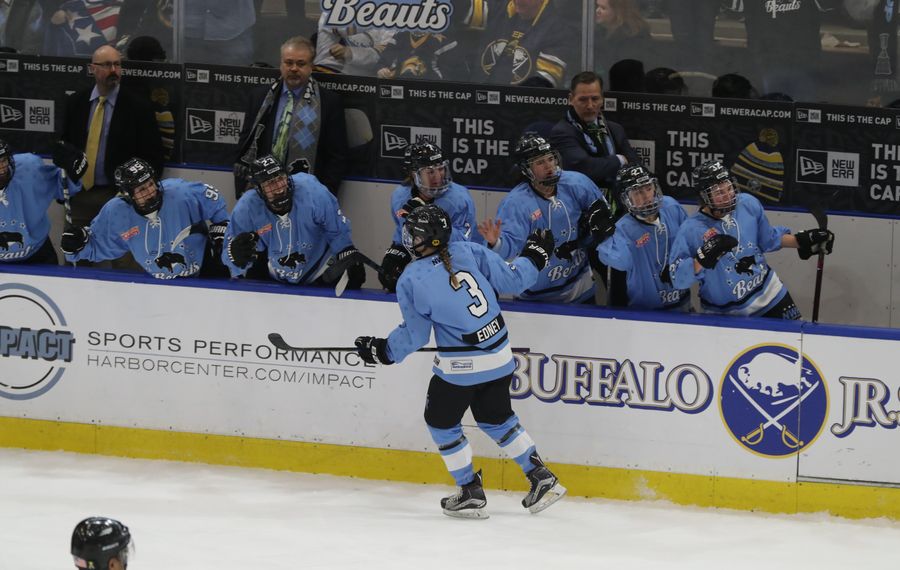 Playoff hockey is known for its intensity. Make it a one-game, winner-take-all championship, and that gets ratcheted up to a whole new level. That's what the Buffalo Beauts face in Sunday's Isobel Cup final.

"It's do or die," Beauts forward Corinne Buie said. "Every shift that you're out there could be the play that changes the game."

Buffalo will face the top-seeded Metropolitan Riveters at the Barnabas Health Hockey House in Newark, N.J. at 3 p.m. The game will be streamed live on the NWHL's Twitter page.

The Beauts, who have appeared in all three Isobel Cups, have the opportunity to become the first back-to-back champions in National Women's Hockey League history. The Boston Pride split their first two appearances, defeating Buffalo in 2016 and losing to the Beauts in 2017.

Eight players are back from last year's Beauts team, including Buie. She scored the game-winning goal in the 2017 final, as well as a game-tying tally in Buffalo's 3-2 overtime semifinal victory against the Pride on Saturday.

"The experience helps us, but we're not doing so much talking about that," said Buie, who has a chance to become the first player in league history with three Isobel Cups. "We've just got to stay poised and not be trying to change anything up."

Buffalo was a surprising champion last season. The Beauts entered the playoffs in third place with an unimpressive 6-10-1 record. They lost all five regular-season matchups to the Pride, who they upset in the final.

"We were all the underdogs," defenseman Jacquie Greco said. "It wasn't our best season. We probably weren't picked to win the cup. To show that we could battle from being such an underdog to win the cup I think showed the pride and determination that this team had."

The outlook is different this year, as the Beauts could be considered the favorites with how well they're playing. Buffalo is riding an 11-game winning streak and Greco said they're playing the best hockey they have all season.

"You try not to think of it like that because you could jinx yourself," Greco said on increased expectations.

Standing in the Beauts' way is a Riveters team that finished two points ahead of them in the regular season and boasts the league's Defender of the Year, Courtney Burke. Metropolitan should also have a bit of a chip on its shoulder after Buffalo eliminated the Riveters in the semifinals last season.

"I'm expecting some physical play," said forward Hayley Scamurra, a Williamsville native and the league's Rookie of the Year. "They're going to want us to get penalties so they can get on their power play. We've got to remember not to retaliate and just try and play our game."

The Beauts have had Metropolitan's number as of late. The teams split the six-game season series, with the Riveters winning the first three matchups and Buffalo winning the last three.

"This is a game seven and this one is for all the marbles," Greco said.