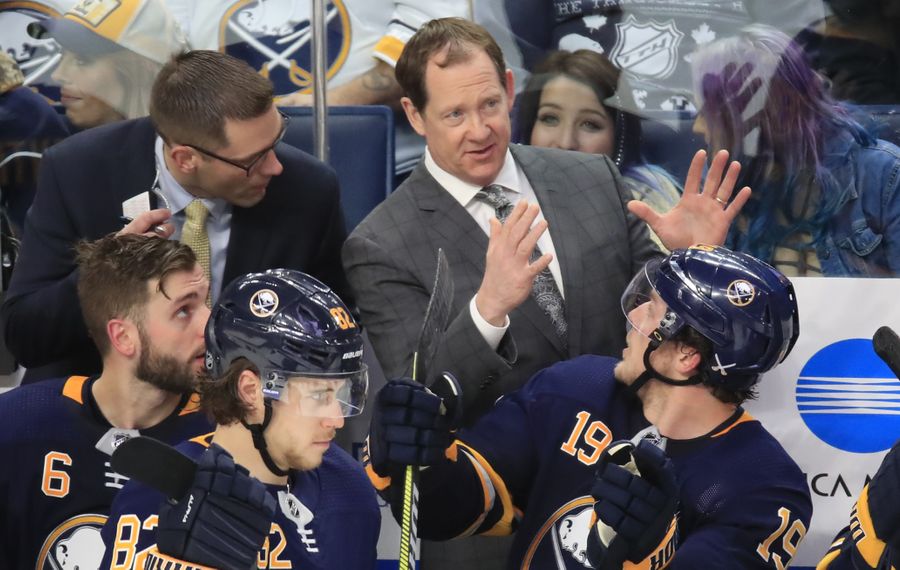 Phil Housley wasn't a happy camper after Wednesday's 4-1 loss to Arizona and his mood had not softened one iota when the team returned to KeyBank Center for practice Thursday morning.

Briefly stopping a drill, Housley excoriated the group by yelling, "Get on your toes and start ... working." And that, for the record, is an edited version of the coach's direction.

"I just thought we weren't doing what I told them to do, which was a simple execution play of attacking with wide speed and a middle-lane drive," Housley said after the workout ended. "So I just tried to get their attention and I thought the execution from that point was good."

The Sabres had a video session prior to practice to review Wednesday night's ugliness and, suffice to say, the word around the dressing room was that there was no popcorn passed out to those watching.

Housley lit up his team after the game and was still fuming when he met the media a few minutes later, calling the loss "unacceptable" in what easily rates as the most fury reporters have seen this season from the first-year coach.

"He wants to get his message out and it's totally understandable," veteran winger Jason Pominville said after practice. "We've got to do our thing and go out there and work. If they feel we're not going hard enough, the'yve got to make sure they push those buttons and they did today. You saw the pace go up as soon as they did that."

Housley was particularly agitated by the fact the Sabres were outmanned by an Arizona team that was languishing at the bottom of the standings in the same neighborhood as Buffalo is. In recent weeks, the Sabres have posted wins over Tampa Bay, Boston, Toronto and Chicago, took Vegas to a shootout and battled Stanley Cup favorite Nashville hard for 55 minutes before eventually losing, 4-0.

Getting blown out at home by the Coyotes did not sit well.

"Maybe it's the way we prepare for teams that are elite teams in the league," Pominville theorized. "We know we have to show up and if we don't, we know it's not going to go our way. For some reason, we take the foot off the gas against teams that are kind of where we are in the standings. ... We have to make sure we step on the gas and have a little pride. That's what it is. Have a little pride in the room and come out with an effort."

Housley hopes his team learned a lesson from it heading into Friday's visit by Montreal.

"You look at the body of work in our last 20 games I think we've moved in a good direction," said Housley, whose club is 9-9-2 in that stretch. "But it reminds us you have to come prepared to play whether you're playing the best team in the league or you're playing one of the lower teams in the league. It's tough to win in this league and you have to have to the same mindset. We didn't do what it was going to take to win in yesterday's game.

"I hope they're angry. I hope they're upset and now we have to get ready for tomorrow and what we can control. We've got to learn from that."