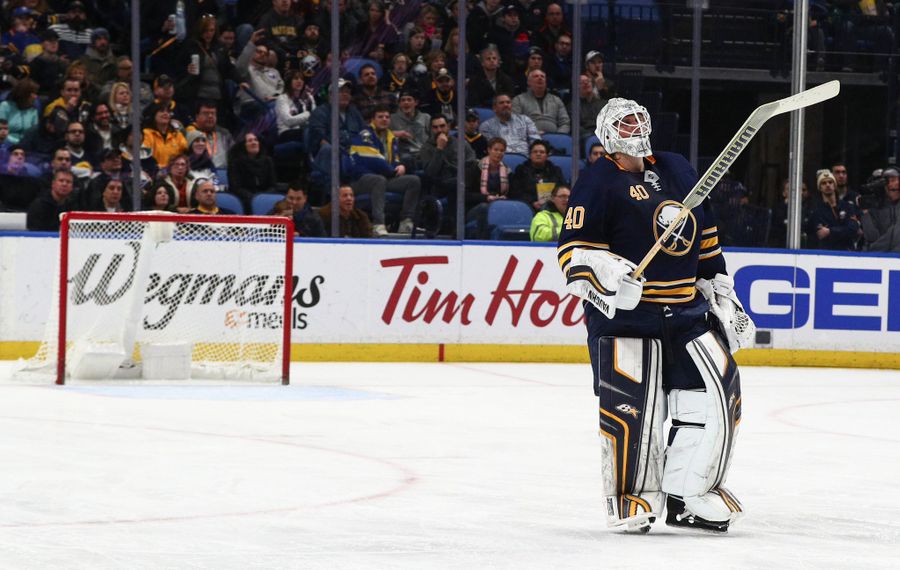 The Buffalo Sabres' three-headed goalie is no big deal to Robin Lehner. He's lived it before and understands what the club is doing with prospect Linus Ullmark, even though it will likely cost Lehner ice time over the season's final weeks.

"I got into the league the same way. Almost every goalie that gets into the league does it this way," Lehner said prior to the game against the Arizona Coyotes in KeyBank Center. "It happens every year with multiple teams. Especially in the situation we're in, being out of playoff contention and with Ullmark doing a great job in the minors.

"He deserves to get a couple of games before he goes back for a playoff run. I did that for a few years. The whole lockout year, it was me, Ben Bishop and Craig Anderson in Ottawa. We were rotating even when we were all healthy until they traded Bishop to Tampa."

Lehner sat out his third straight game Wednesday with what he termed "a small issue that's not a big deal." But he returned to practice fully and said he's progressing day by day.

Lehner, who is 14-25-9 this season, said Ullmark is getting the same kind of look Alexandar Georgiev is getting in net for the New York Rangers and wondered if mega prospect Thatcher Demko might get the call from Utica to Vancouver before the season ends.

"Guys deserve the chance to get the looks, get experience and it's good for the management to see where a player is at," Lehner said. "In our case, with Linus probably here full time next year it will be good for them to get him some experience."

Lehner wasn't worried about the impact of Ullmark's promotion on his own situation much going forward. Lehner, 26, will be a restricted free agent after the season. He signed a one-year, $4 million contract last summer and it remains to be seen if the team will give him a qualifying offer, work a trade for his rights or even walk away from offering him a new deal.

"I don't have a situation. I really don't," Lehner said. "Right now, there's 10 games left in the season with Buffalo and we'll see what happens. You go day by day and just see how it goes."

Justin Bailey got a big chance Wednesday – playing on a line with Jack Eichel.

Bailey had forged some good chemistry with fellow Rochester teammates Evan Rodrigues and Nick Baptiste but was moved up Wednesday to join Eichel and Kyle Okposo. With Bailey up a slot, Jordan Nolan joined Rodrigues and Baptiste.

"It's an opportunity I'm obviously looking forward to and I think the things I've been doing the last couple games I just need to continue to do," said Bailey, who entered the contest with three goals in 11 games. "Jack is a player who's one of the best in this game with having the puck on his stick. The more I can get him the puck, whether on the forecheck or getting over 'D' and causing turnovers, that's what I'm going to do."

"We're just trying to find some balance moving guys around to get some more scoring," said coach Phil Housley. "We're going to put guys in different positions like we said all along, just giving them an opportunity to see how they react and evaluate guys down the stretch here. This is an opportunity for Justin to use his speed to try to create some chemistry."

Coach Rick Tocchet returned to the Coyotes bench after missing Monday's game vs. New Jersey due to the death of his 93-year-old mother, Norma. The funeral was Tuesday in Toronto and Tocchet rejoined his team here Wednesday afternoon.

"When you have a lot of young guys in your lineup, the compete level night after night has to be there because there's no easy game," said Coyotes assistant coach John MacLean, who spoke to reporters after the morning skate in Tocchet's place. "We're kind of figuring that out, buying into what's happening and how we want to play. The credit goes to them. They could easily have folded and they didn't."