That's right: two places are opening to serve people who think coffee tastes better with a purring kitty on your lap.

Cat cafés are two-part establishments, for sanitary reasons. Patrons can buy food and drink in the café section, and sit there and scope the kitties. Or they can pay an additional fee and bring it with them into the cat habitat.

There, cats from an animal rescue outfit will be doing cat things. Customers who fall in kitty love may, in certain cases, be able to adopt their favorite cat after the usual vetting and fees. Cat cafes are not places to bring your own cat, however. 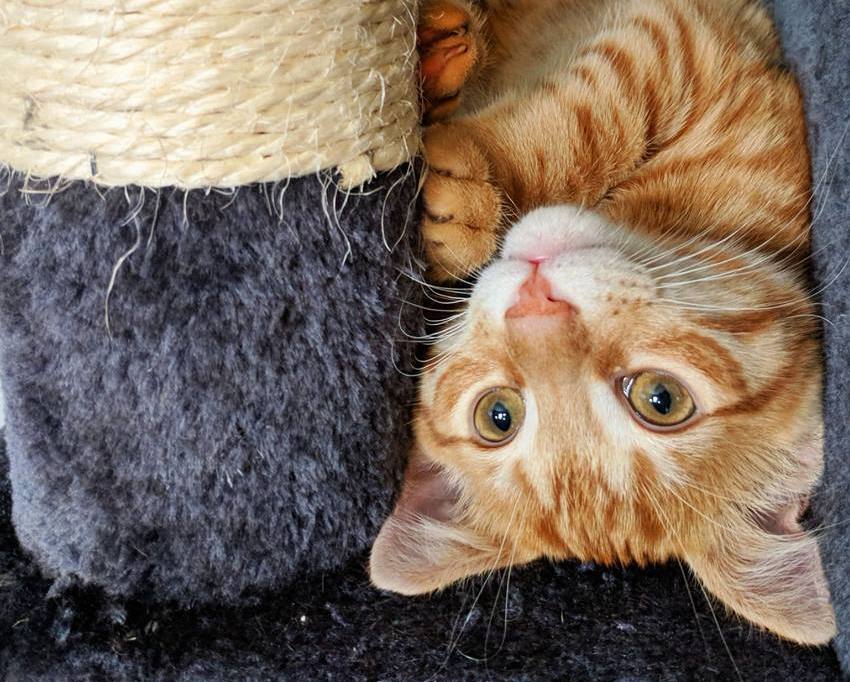 One of Jessica Brandon's seven cats. (Purrfect Café and Gallery)

In late May, Jessica Brandon expects to open Purrfect on Hertel. Next to the cat area, viewable through a teaser window, will be a full restaurant with a light menu heavy on vegan and vegetarian options, plus beer and wine.

Brunch is coming to the restaurant, while the cat lounge will host sessions of cat yoga, and installations from local artists that will include works customers can buy.

Brandon fell in love with cat cafés in Europe, traveling after surviving cancer. She toured about a dozen before falling in love with one in Aberdeen, Scotland called A Cat in the Window Café. "It showed me what a cat café could be – clean, modern and comfortable – while others were kind of stuffy, more like crazy cat lady style."

She's a cat lady herself, minus the crazy, she said. Brandon has seven cats at home, after recently taking in a pregnant cat who added four kittens to her house.

She will be partnering with Ten Lives Club, a Blasdell-based rescue outfit, and expects to charge about $5 an hour to visit the kitties.

Buckminster's, named after a cat whose Instagram account has more than 10,000 followers, plans to open this fall. Owner Molly Hutton is working with designer Davidson Rafailidis and landlord Giles Kavanagh, the people who put stylish coffee shop Tipico together.

The front part will be a "proper coffee shop" put together with the assistance of Tipico's Jesse Crouse, Hutton said.

Ample windows will allow cat-gazing. Cat loungers can pay their fee – something in the $5-$8 range – and cuddle kitties. Hutton said she'll be partnering with a cat rescue group, and is in discussions with Second Chance Sheltering Network.

Wine will be available as well, along with a light food menu, with locally produced baked goods. The menu will probably expand after the business settles in, she said. Customers will be able to book time with cats online, she said.

The café is named after Buckminster, who she adopted from the Buffalo animal shelter five years ago. He's a mixed breed, she said, "nothing fancy." But 10,000 Internet people disagree.

Sinatra's moves: Sinatra's, the classic Italian-American restaurant on Kenmore Avenue, reopens for dinner in its new building across the street on March 22.

The new Sinatra's at 945 Kenmore Ave., Tonawanda, can hold twice as many people for dinner, said manager David Ortolano. New features will include gluten-free pasta, a broader selection of Italian wine, and a patio. The last night for dinner was March 18.

What won't change is the menu prices, Ortolano said.

The menu at the new location is expanding slightly, but the quality of the cuisine, overseen by chef-owner Michael Sinatra, will be unchanged, Ortolano said.

"Sinatra's is not the place where you go in and get edible flowers on your plate," he said. "It's a place where you're going to get the best veal, the best braciole, the freshest seafood and the best sauce in the city."

Sinatra's already has been making its own ravioli, tortellacci and sacchetti, he said. In the new, larger kitchen, Sinatra's will have gluten-free pasta, including a gluten-free ravioli, on the menu nightly.

Besides the larger dining room, there's also a private dining room that seats 12, and a banquet room that can hold 80. A four-season patio will be heated in winter, cooled in summer, and have windows that open.

John Sinatra opened the restaurant at 938 Kenmore Ave., in 1981. His son Michael joined him in the kitchen, and took over chef duties in 1992. The building is slated to be demolished for a parking lot.

At The Black Sheep, 367 Connecticut St., a chef from another Buffalo-area restaurant will offer a family-style meal featuring family-style dishes, one Sunday a month, said Steven Gedra, Black Sheep chef-owner.

Sunday Supper aims to be a casual, child-friendly event, where the area's cooking talents serve all-you-can-eat menus of family favorites and other dishes not normally seen in their restaurants.

For five years, The Black Sheep hosted guest chefs for the popular Midnight Mass dinner series. Midnight Mass was designed to give chefs a chance to cook favorite dishes they didn't cook in their own restaurants, for a circle of friends and the culinarily adventurous.

After about 50 Midnight Masses, "a lot of us just want to have a little more fun with our food, and not be as serious," Gedra said.

A dinner that starts at 6 p.m. Sunday makes it easier for more people to attend, Gedra said. It's also easier on a restaurant staff faced with working into the wee hours Sunday after Midnight Mass, only to face Sunday brunch duties, Gedra said.

Tickets to the March 25 Sunday Supper are $55, not including tip or alcohol. They are available online at squareup.com/store/the-black-sheep-restaurant-and-bar.

Gedra explains the new format in a video:

After the death of owner Aldo Evangelista, his son Donato said he was taking over the Pine Avenue restaurant with his mother, Lillian. The restaurant served dinner for several nights, then closed.