It's a tossup between baseball and boxing. Considering that we're in basketball's championship season, maybe we should make it a jump ball between them.

The question is: Which sport--baseball or boxing--has engendered the greatest contributions to American literature?

Some would rush to nominate baseball, "the great American game," on the strength of truly great novels about it by Ring Lardner, Bernard Malamud, Philip Roth and Robert Coover plus a big chunk of Don DeLillo's magnum opus "Underworld."

John Updike's essay about Ted Williams "Hub Fans Bid Kid Adieu" is probably responsible for more literary sports journalists than anything else in the last 60 years.

Once upon a time, a battle between New and Old Journalism was waged on baseball's Field of Dreams.

But others would argue that was even more true of boxing, whose primal giant-sized figures were virtually wedded to the printed word's own giants with the clicking of typewriters from Jack London to H.L. Mencken, Ernest Hemingway, A.J. Leibling, Nelson Algren and Norman Mailer providing the background music.

As popular as football has become, it doesn't stand a literary chance in that company.

Until a few weeks ago, I would have said the same thing about basketball which couldn't possibly be more in season now if it tried. The NCAA tournament gave us great games from local college teams, both male and female (University at Buffalo's men and women and St. Bonaventure). Even those of us who prefer the NBA to college basketball's "Bracketology" were probably transfixed by college hoops for five straight days.

But about four weeks ago, the non-profit Library of America--without question America's finest and most important book publisher--finally came through with a volume of "Basketball: Great American Writing About America's Game" edited by Alexander Wolff (Library of America, 463 pages, $35.) It isn't nearly as packed with literary stars as the LOA's baseball and boxing volumes, but what a terrific book it is anyway. 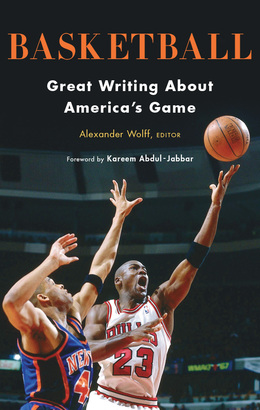 You would expect wonderful pieces about the out-sized figures in the sport, whether Bob Cousy (by Herbert Warren Wind), Bobby Knight (Frank Deford), Larry Bird (Charles B. Pierce), LeBron James (Lee Jenkins) and Kareem Abdul-Jabbar (David Bradley). What you don't expect is a terrific piece about a second-tier Harlem Globetrotter that few of us still remember, as impressive as he was in his prime. But there's the piece on Page 104, "Requiem for a Globetrotter" about Leon Hillard, the memorable dribbling specialist who took over for the great Marques Haynes, "Goose" Tatum's co-star on the original Harlem Globetrotters.

The piece was written by a writer whose name, somewhat shamefully, was unknown to me. His name was Peter Goldman and his day job was to write more than 120 cover stories for Newsweek magazine in its golden years.

His portrait of Hillard is a kind of journeyman's masterpiece in the "Old Journalism" which finally appeared in Sport magazine. Goldman was the author of "The Death and Life of Malcolm X," but his portrait of Hillard is an extraordinary piece about a figure who would find it all too easy to languish in total obscurity in the 21st century were it not for the piece Goldman left behind.

Basketball, in its great season of the year (NCAA Tournament in action; the NBA playoffs and championship to come) may not be able to boast the marquee literary names that a boxing and baseball anthology can. And that's why Wolff's basketball anthology is such a wonderful surprise.

Lest anyone doubt that no publisher in America comes anywhere close to the Library of America in the art of memorializing the best that has been written in this country, the LOA's other spectacular publication for this season is a two-volume specimen of what they do better than anyone else in the business.

What they've just done, in my opinion (IMHO, in 21st century app-speak), is to create the perfect two-volume set of a magnificent American writer whose work is, in at least a third or even half of the way, a struggle to go nowhere.

The remaining work is in the two-volume set "Norman Mailer: The Sixties" (Library of America, 1430 pages, Library of America, $80) wherein Mailer was galvanized into doing his greatest work by a decade of some of our most unexpected and tragic turmoil. Mailer and the '60s belonged together both their majestic profundities and their impossible B.S.

His biographer J. Michael Lennon and the LOA selected the contents brilliantly. Whether Mailer's novels survive much beyond two of his first three "The Naked and the Dead" and "The Deer Park" (both of which are now encased in amber) is a question that will live longer than the books. I'd certainly like to see the two that are here--"An American Dream" and the Burroughsian "Why Are We In Vietnam?"--make posterity's cutoff.

His discovery of journalism is what made him for all time and will preserve him long after his novels are asleep at the bottom of America's literary ocean. The two big ones were "The Armies of the Night" and the political convention book "Miami and the Siege of Chicago."

I remember reading these while he was actively engaged in re-inventing himself (and, to a lesser extent, journalism ) in the pages of Esquire magazine including his JFK piece "Superman Comes to the Supermarket" and his amazing story about Floyd Patterson and Sonny Liston "Ten Thousand Words a Minute."

By the end of the '60s, he had become pivotal to almost everything that seemed to be happening around him. On the strength of it, he persisted for the rest of his declining career, despite all those who insisted he had become pickled in corroding fame ever afterward (with the exception, of course, of " The Executioner's Song").

What an incredible thing it was to watch Norman Mailer re-invent himself in the '60s. How galvanic that work remains now--especially compared to the work that came after.

And how surprisingly basketball--arguably the greatest urban sport--turns out to be in its LOA anthology.