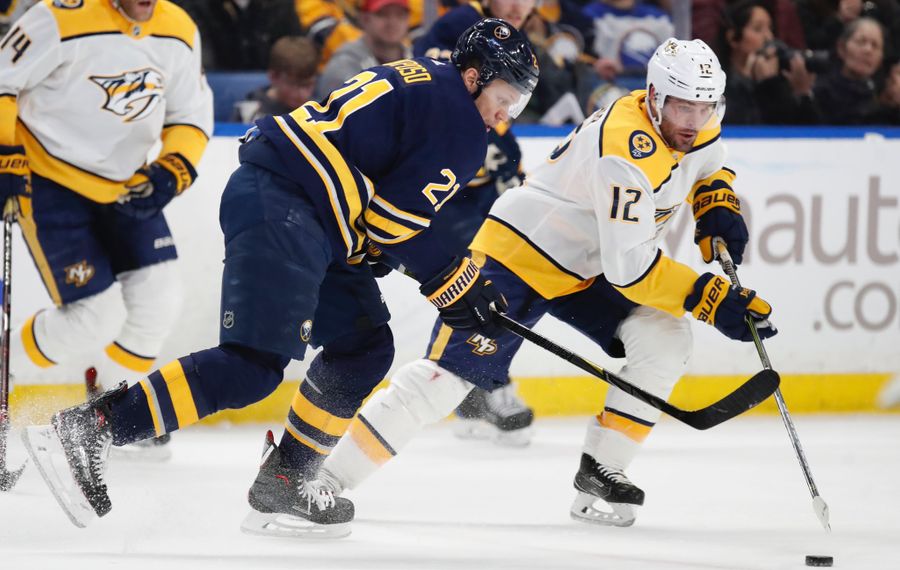 There are few arena atmospheres as electric as Nashville. Buffalo is far from buzzing.

The Predators feel at home in both.

The NHL's top team won its seventh straight game in KeyBank Center, earning a 4-0 victory Monday night. The Predators haven't lost in Buffalo since an 8-4 setback on Feb. 27, 2008.

Net return: Sabres goaltender Linus Ullmark made just his second start of the season and first since stopping 44 shots in a 3-1 win over Columbus on Jan. 11.

Surviving the challenge: Recently unretired center Mike Fisher opened the scoring, though he had to wait for confirmation. Fisher reached up to tip a point shot by Miikka Salonaki, redirecting the puck past Ullmark with 7:31 left in the second period.

Fisher was near Ullmark's skate in the crease prior to the tip, so the Sabres' Phil Housley issued a coach's challenge for goaltender interference. The referees consulted with NHL Hockey Operations to determine no interference occurred.

Doubling up: The Predators took a 2-0 lead with 2:57 left in the second. Ullmark stopped a blast by Viktor Arvidsson from the right circle, and the rebound was chopped to Ryan Johansen on the left side. He found the open net.

Icing it: Nashville's Filip Forsberg made it 3-0 with 3:51 to play. Ullmark stopped Arvidsson from point-blank range, but Forsberg drove to the crease to bury the rebound.

Ryan Hartman scored with 23.6 seconds left on his own point-blank chance.

More shots: The Sabres outshot the Predators, 14-11, during the second period but couldn't solve Rinne.

Post: The Sabres started the third period with 1:50 of carryover power-play time and nearly cut their deficit to 2-1. In a rapid-fire sequence, Kyle Okposo hit the post, Sam Reinhart had a shot blocked and Jack Eichel sent the puck through the crease.

Scoreless first: Rinne made 13 saves and Ullmark countered with 10 as the teams entered the opening intermission in a 0-0 tie. Arvidsson had a partial breakaway just seven seconds in, but Buffalo settled and took 12 of the opening 17 shots.

They're back: Okposo returned to the Sabres' lineup after missing three games with a concussion. The right winger started on a line with center Johan Larsson and left wing Jordan Nolan.

Defenseman Casey Nelson was back after missing one game with a lower-body injury and skated with Nathan Beaulieu.

They're out: Zemgus Girgensons, who left the previous game with an undisclosed injury, did not play. Forward Seth Griffith and defensemen Victor Antipin and Josh Gorges were the healthy scratches.

Next: It's a battle of the bottom-feeders as the NHL's 30th- and 31st-ranked teams meet. Buffalo hosts the Arizona Coyotes on Wednesday in the fifth game of its six-game homestand.

Inside the Sabres: Assistant GM Steve Greeley is on the rise, sees Buffalo doing the same