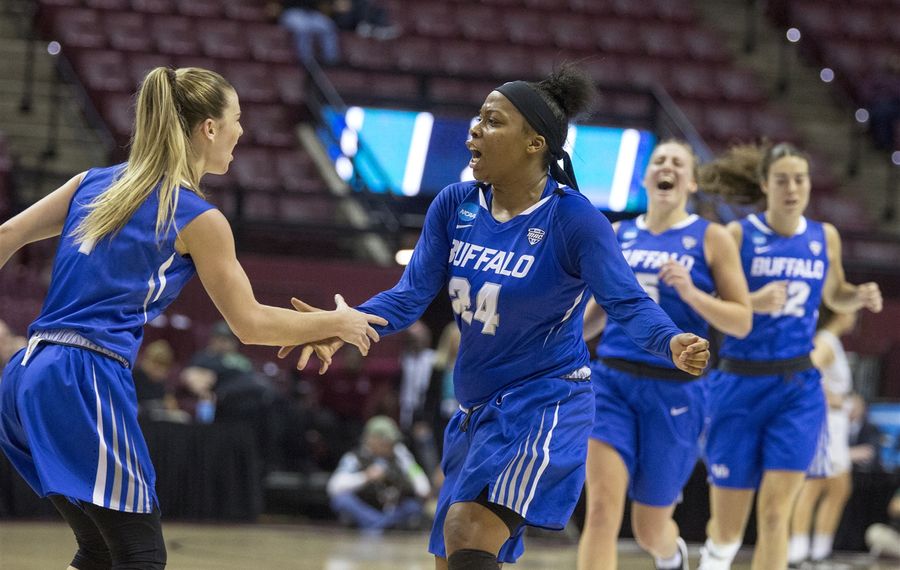 The men’s season came to an end in the Round of 32 against Kentucky, but that didn’t decrease the magnitude of the team’s beat down against heavily-favored Arizona. UB bested the fourth-seeded Wildcats in nearly every facet of the game and shut down potential first-overall pick DeAndre Ayton in its 89-68 win in the first round.

The women also blew out a higher seed, as the 11th-seeded Bulls got 36 points from Cierra Dillard in a 102-79 victory against sixth-seeded South Florida. The 102 points are the most scored by a double-digit seed in the history of the NCAA Tournament.

2. Dylan McLaughlin: The Canisius men’s hockey forward was named the Atlantic Hockey Player of the Year and one of 10 finalists for the Hobey Baker Award, the most prestigious award in college hockey. McLaughlin, a junior from Lancaster, led Atlantic Hockey in assists (25) and points (38) in the regular season and ranks in the top 10 in the country in both categories. The Golden Griffins season endedin a loss toAir Force in the AHC semifinals.

4. D’Youville women’s lacrosse: Jillian Golding (Lockport) notched four goals and four assists as the Spartans earned their first victory ever in the sport. Megan Dulniak (Cheektowaga) recorded 12 saves in the 13-3 victory against the Hilbert Hawks. It’s an enormous improvement from last season, D’Youville’s first at the varsity level, as Hilbert bested the Spartans 20-4 in their first-ever meeting.

5. Katelyn Dennis: The infielder set a Fredonia softball record for career home runs when she hit her 10th in a 5-3 loss to Lakeland.

6. Bryan Lantry: The UB wrestler advanced to the second day of the NCAA Championships for a second straight season with a 4-1 decision over Colin Valvidiez of Northwestern. His run in the championship bracket came to an end with a 4-3 decision against Scott Delvecchio of Rutgers.

7. Jermaine Crumpton: The Niagara Falls native scored 16 points in the final game of his basketball career at Canisius, an 80-78 loss to Jacksonville State in the College Basketball Invitational. He finished his career with 1,587 points, placing him tied with Darrell Barley for sixth all-time in Griffs career scoring.

9. Lee Nickell: The UB men’s tennis coach earned the 100th win of his career in a 6-1 Mid-American Conference victory over the Toledo Rockets. The Bulls won five of six singles matches for their first MAC triumph of the season.

10. Rylee Hehir: The St. Bonaventure softball pitcher threw a six-inning shutout, allowing only four hits, in a 9-0 victory over Samford. She earned her team-leading fourth win of the season.

• Colgate’s Olivia Zafuto of Niagara Falls, who played high school hockey at Nichols, had an assist on the Raiders’ goal in the 2-1 overtime loss to two-time champion Clarkson in the NCAA Division I women’s championship game in Minneapolis.

• Ohio State swimmer and Lancaster native Kristen Romano competed in four events in the NCAA Women’s Swimming and Diving Championships. She finished 10th in the 400-yard individual medley and the 400-yard freestyle relay.

College Power 10: Adams and Mobley combine for 60 against UMass

College Power 10: Adams scoring spree is one for the books at Bona

College Power 10: Our weekly ranking of the best in WNY collegiate athletics

College Power 10: Our weekly ranking of the best in WNY collegiate athletics