University at Buffalo men’s basketball coach Nate Oats boosted the stock of his program and his own name with a strong showing in the NCAA Tournament.

Success on the national stage can turn coaches such as Oats into hot candidates for lucrative job openings around college basketball in the coming weeks. So it would seem that UB did well to lock him up with a five-year extension earlier this month.

However, a Buffalo News analysis of Oats’ new contract, obtained through the Freedom of Information Act, reveals Oats has a significant but hardly insurmountable barrier to leaving for another job if he so chooses, even as soon as this offseason.

The buyout figure, though, is more significant than the salary.

All coaches have buyout details in their contracts, laying out what it will cost the coach to exit the contract early. The numbers are up for negotiation but are generally relative to the overall value of the deal.

If Oats were to leave for another job this offseason, his contract says he would owe UB $1 million. If he were to leave after next season, the figure shrinks to $500,000, and gets smaller in each following year:

While those are large amounts of money, that’s hardly enough to discourage a Division I basketball coach from leaving for perhaps twice his base salary at a high-major program.

The new program and its boosters would very likely help cover the buyout. UB and Oats' new school also can work out agreements over the payment, which is common regardless of the amount. Among Power Five schools last year, Illinois paid $3 million to Oklahoma State to cover the buyout of Brad Underwood. Missouri paid $1.2 million to Cal for the buyout of Cuonzo Martin's contract.

Oats certainly made an impression after UB upset star-laden Arizona and challenged powerhouse Kentucky. He talked up UB in several national interviews between games, increasing his name recognition in the process.

“I don’t like to say young coach, old coach – he’s a very good coach,” ESPN analyst Seth Greenberg said of Oats, 43, who has two NCAA appearances in his three years as a Division I head coach. “He connects with his players. They play for him. They reflect his intensity and stay in the moment. I think the way his team carried themselves was as positive a reflection on Nate as how his team played. And that’s always important.

“The perception, if I’m an athletic director watching, would be, ‘Here’s a guy that has total control of his team, has a connection with his team, has recruited well to a MAC school … and has his teams on the same page,’ ” Greenberg added.

“To me, you’ve got to be connected with your team. If you’re not connected to your team – the days of players playing for a guy because ‘Coach’ is in front of his name is long gone. Players have to trust their coach, they have to believe in their coach, be in it with their coach. You could see that the Buffalo players were in it with Nate and his staff.”

Would Oats really leave this offseason? That could be the – ahem – million-dollar question.

UB fans know all too well that a coach can leave shortly after signing an extension: Bobby Hurley did just that three years ago, leaving for Arizona State in April 2015 after being extended that March.

Factors that could help keep Oats at UB start with idea that the Bulls are expected to be even better next season. Top three scorers CJ Massinburg, Nick Perkins and Jeremy Harris will be seniors next season and prized recruit Jeenathan Williams of Rochester will join the mix. Oats has only been the head coach for three years and his resume could be strengthened by next season's results.

To leave now, the right offer would have to present itself, and that’s far from a certainty. Greenberg said the job market has not taken shape yet, but the potential fallout from the FBI’s reported investigation of several high-profile programs could create an interesting domino effect.

The situation could be complicated by UB not yet completing its national search to replace athletic director Allen Greene, who now runs Auburn’s athletic department and could have an opening if the Tigers part ways with coach Bruce Pearl. 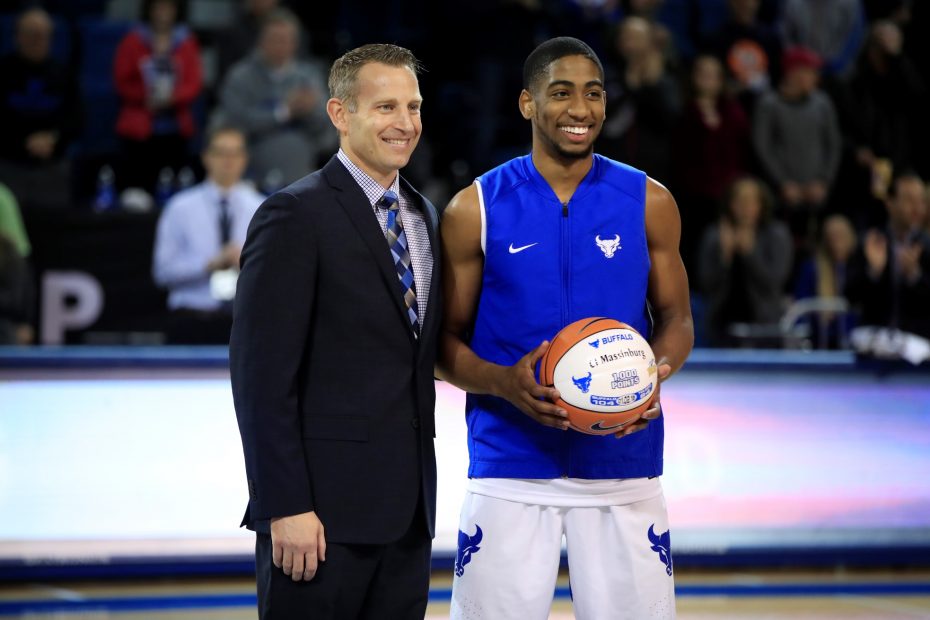 "We love it here," Oats said in January when asked about his contract status, before his extension was signed. "I loved working for Allen, but we’ve got a great administration that’s still here. My family loves it here.

"We have really everybody but Wes (Clark, a senior) back next year. I want to be here next year," Oats continued. "I don’t plan on going anywhere. It’d be great if they gave me a contract extension. We’d stay here in the area and build this thing up. We’ve got maybe the best recruiting class – I mean, it’s hard to rank it … our recruiting class is really good. So I think we’ve got a chance to be better next year than we are this year. I mean, we should be. Wes is an unbelievable player but, I mean, we’ve got a couple point guards coming in, Davonta (Jordan) and Dontay (Caruthers) will be another year older. So I don’t want to leave. We’ll figure it out.”

But that doesn’t mean a big-name school won’t come calling – if not this spring, then perhaps next year. And if it offers enough money, the buyout in Oats’ contract isn’t preventing him from going. You can call it a coach-friendly deal, but that’s the nature of the business.

“Jobs, it’s funny because it really is fit, it’s relationships, it’s region of the country; there’s so many things that go into that,” Greenberg said. “He surely didn’t hurt himself. Obviously, he helped himself. He carried himself with a confidence and an intensity.”

Oats can earn bonus money in six ways under his new deal, all of which are fairly standard.

The contract also has a provision stating that if New York’s governor bans travel to a state through an executive order that prevents UB from participating in an event, the coaches will still get their bonus money earned for appearing in the event.

But Oats’ contract, like all agreements with college coaches, works both ways. The school can fire him before the contract expires if it wants, but it owes him his base salaries over the term of the contract (though UB’s expenditure can be offset by Oats’ new salary if he takes another job in coaching in the D-I or pro ranks).

Adding it all together, Oats can earn a maximum of $340,000 in extra compensation if UB somehow wins the national title and he maxes out his bonuses.

Accounting for his base salary, benefits and opportunities for other income, that could Oats put in the range of $1 million a year, making him one of the highest-paid public employees in the entire state.

And yet, big-time college basketball programs would look at that number and shrug. If they want Oats badly enough, his new extension isn’t stopping him from leaving.