At 3 p.m. March 19, think of the Buffalo Philharmonic Orchestra, and send good vibes.

Taking the five-hour time difference into account, that's when BPO Music Director JoAnn Falletta will be giving the downbeat for the orchestra's first full concert in Poland. It takes place in Wroclaw, in the Witold Lutoslawski Forum of Music.

The BPO will have a full day off to explore Wroclaw (Raht-slav) and pursue a popular new pastime there, dwarf hunting.

You read that right. The BPO reports there are some 350 tiny bronze dwarf statues scattered throughout the city. The statues commemorate the Orange Alternative movement, a movement that fought the Communists and used a dwarf as its symbol. An app is available to assist tourists and natives alike in "hunting for dwarfs."

Wroclaw is close to the border with Germany. Throughout much of its long history, the city was part of German states and was known as Breslau. Johannes Brahms wrote his famous "Academic Festival Overture," a joyous piece brimming with drinking songs, as thanks for an honorary philosophy degree given him from the University of Breslau. Today, Wroclaw has  a large student population (130,000 of them), a reputation for art and architecture, and, living up to that Brahms overture, the biggest beer festival in Poland. The BPO regrets that the festival is not taking place until June, but it seems this is our kind of town.

The road that led to Wroclaw has been full of adventure. 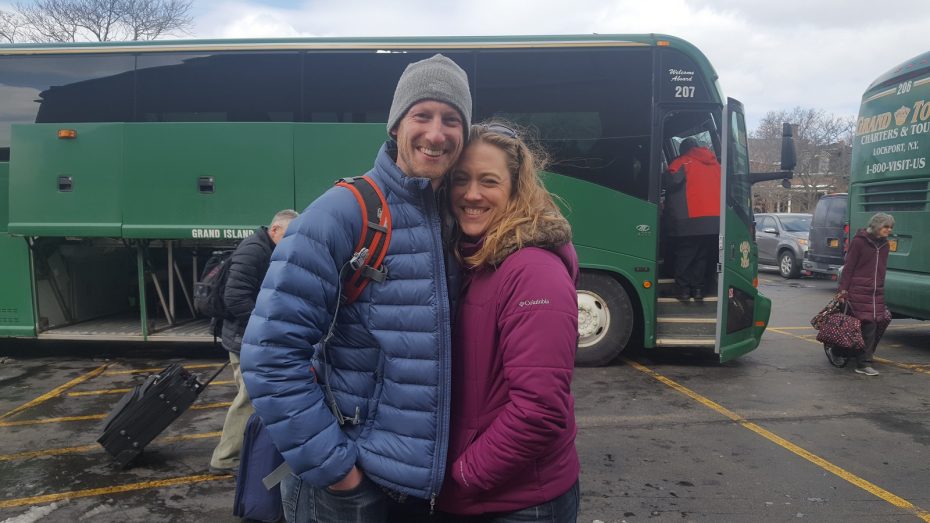 BPO Associate Principal Bass Brett Shurtliffe says goodbye to his wife before he boards the bus that will start his journey to Poland. (Photo courtesy Buffalo Philharmonic Orchestra)

Most of the BPO musicians left Kleinhans Music Hall at 1 p.m. March 15, boarding buses to the Toronto airport. It was exciting and emotional. Principal Tuba Don Harry was on the BPO's previous European tour 30 years ago, and was now going again. One young bassist, Rob Webster, had been eating dinner with his girlfriend at TGIFridays when he was asked to sub with the orchestra -- and, oh yes, it would involve traveling to Poland. He beamed as he stepped onto the bus.

The orchestra was divided into two travel groups and took two buses. One group was bound for Brussels, Belgium, and the other for London, England. The plan was for both groups to meet in Prague in the Czech Republic at midday on March 17, and board a bus for the four-and-a-half hour trip to Wroclaw.

Meanwhile, a sizable BPO contingent had left ahead of time and was already in Krakow.

Among them were BPO Music Director JoAnn Falletta; her husband, Robert Alemany; BPO Executive Director Dan Hart, and Poland tour ambassador/board member Cindy Abbott Letro. Joining them were eight musicians from the BPO's woodwind section, who were giving three concerts in the days leading up to Wroclaw.

The weather was bleak in Krakow, rather like Buffalo, as was clear from the down coats sported by Falletta and Letro in photos. But spirits were high. One cause for rejoicing: The orchestra's instruments had made it safely to the cargo hub in Liege, Belgium, and were on their way to Poland. That was a victory considering the challenges presented by customs and, yes, inspections by the United States Fish and Wildlife Agency.

In Krakow, Hart updated his Facebook profile picture to a strange shot of himself inside a huge head. When Falletta also sent a picture of herself peeking out of a huge head, we had to do a little research (i.e., Googling "Krakow Huge Head").

The mysterious head is a sculpture formally called "Eros Bendato" by the late Polish artist Ito Mitoraj. It seems the sculpture was rather controversial but has found a home in a central square in Krakow where it has become a popular landmark affectionately known as, you guessed it, "the Head."

The Buffalo contingent then took a two-hour bus trip to Luslawice, where the BPO wind octet was due to play on March 15 and 16, and Buffalo's sister city Rzeszow, where the octet played March 17.

The complete orchestra's concert in Wroclaw is the first of four full concerts on the Poland tour. The BPO plays March 20 in Warsaw, March 21 in Katowice, and March 23 in Lublin.

If you're thinking of hopping on a plane, though, think twice. The concerts have turned into hot tickets. All three are nearly sold out.