Come March, green is on my mind. It’s not just because of St. Patrick’s Day. It’s more because spring is coming and that means lots of green.

I like some shades of green more than others - and even those sometimes change year to year. But the shades found in ivy, ferns, baby spinach and, yes, even shamrocks have remained among my favorites.

How do I love green? Let me count the number of times I have mentioned it in columns through the years (with some written in March, by the way):

“With asparagus in season, can warm weather be far behind? No doubt about it: Asparagus tastes like spring - and looks like it, too. That’s why it’s not only popular on the dinner table but a delightful design motif as well.”

“One day last week as I was driving home on the Thruway, I glanced out my window and spotted a green bug clinging to my side-view mirror. Startled, I wondered how in the world this long, grasshopper-like insect could brace itself against the wind … At the end of the exit ramp was a traffic light. Luckily, it was red. ‘Go back to your family,’ I shouted to the bug through my very closed window. ‘Now is your chance.’ Still, it remained on my mirror and even crawled around a bit. ‘Go home!’ I repeated.” 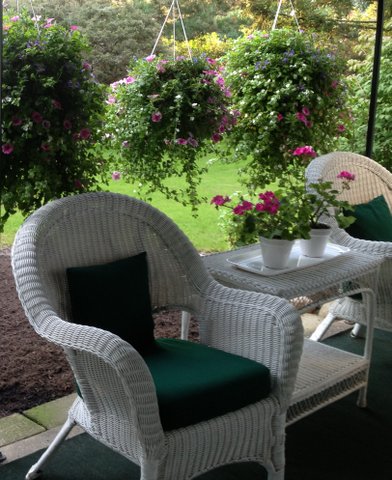 Green, white and pink. A perfect combo for the patio.

“Last weekend, as I was trying to decide which tablecloth to pull out for the dining room table, I found that none of them made me happy. White? Too boring. Black?

Not for spring …Then I remembered a tablecloth that my mother used during the late ’70s. It was made by Vera, had matching napkins and it was bright green. Not like an emerald. Not like a lime. But a sort of tropical, preppy Lilly Pulitzer kind of green.

Knowing she still had it, no doubt perfectly pressed and preserved and hanging in one of her closets, I drove over to ‘borrow’ it.”

“For some time now I’ve been carrying around a paint strip with a color called Cedar Green. It’s a lovely shade but, more important, I’m picturing it in a room with white woodwork ...”

“Emerald has been named Pantone LLC’s Color of the Year for 2013, and I couldn’t be happier. I have always loved the color. I love it with navy. I love it with white. I love it with pink and white. Yes, it can be preppy. But, in my book anyway, it sure beats sage.”

“Ever since I heard that Pantone named Greenery its 2017 Color of the Year, I’ve been seeing it around our house. I see it on the cap of our daughter’s shampoo bottle. I see it on the linen tablecloth and napkins that have been in my family for many years. I see it mixed into the pattern on the cover of a Lilly Pulitzer book I own. It even comes pretty close to the color of our tea kettle.”

So, yes, my love of green continues into 2018. While I doubt I’ll be sampling any green beer this weekend, I may soon be pulling out my recipe for Asparagus Fontina Tart, collecting a few more green paint samples and watching for our ferns to start popping up in the garden.