Ask most successful artists if they'd like to show their work in a hotel, and you're likely to get a hard no.

The notion of "hotel art" brings to mind sad pastel landscapes or wilted still-life paintings hanging lifelessly between double beds. Travelers are so used to this kind of bland, corporate art that they barely distinguish it from the wallpaper.

So the organizers of a new collaboration between Hotel Henry and a trio of Buffalo curators, whose second exhibition is on view through mid-May in the hotel's photogenic corridors, had their work cut out for them.

"There was an artist we won't name who was not thrilled to have their work in a hotel, but when they came and saw the spaces and we explained the program, they were really much more excited," said Anna Kaplan, who established the art consultancy Resource:Art in 2015 with fellow curators Elisabeth Samuels of Indigo Art and Emily Tucker of the Benjaman Gallery.

"It wasn't like I even had to convince them after that. They were thrilled to participate."

After a few months, as the members of Resource:Art have worked to transform the cavernous corridors of the Hotel Henry on the Richardson Olmsted Complex into a series of gallery spaces, old perceptions are slowly giving way to a new enthusiasm.

The Corridors Gallery at Hotel Henry, as the project has been branded, may be the grandest art exhibition space to open in Buffalo this decade. One walk through the light-filled second floor of Hotel Henry demonstrates why.

The current exhibition -- really six separate solo shows with 80 total pieces -- begins in the hotel's second-floor lounge with a series of large-scale photographs by Gigi Gatewood.

Each of two curved passageway galleries, flooded with natural light from large historic windows, hosts its own discrete exhibition. One features new paintings by Julian Montague and the other a series of sculptural works by Gary Sczerbaniewicz. 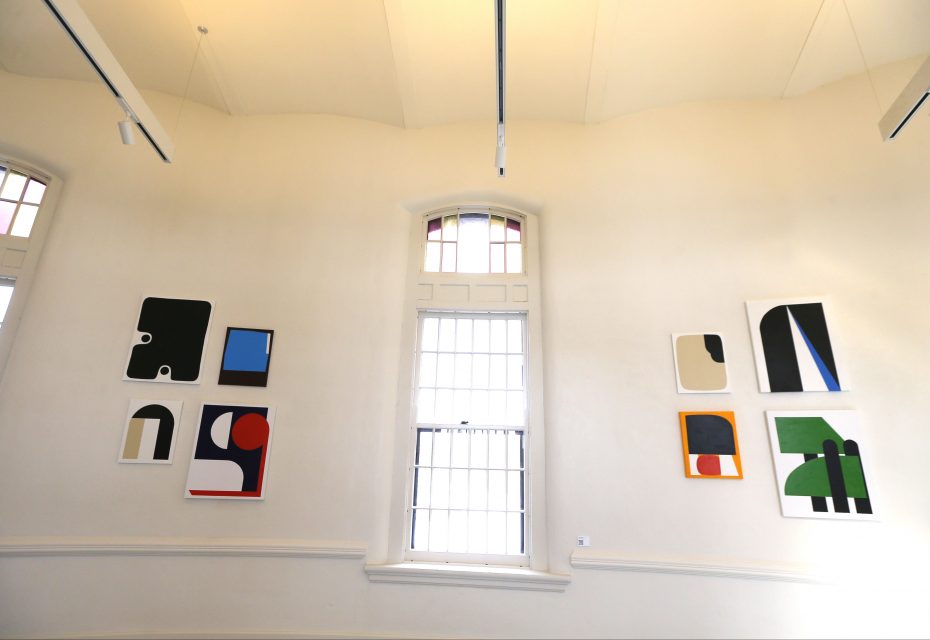 New paintings by Julian Montague are on display in one of two passageway galleries in Hotel Henry. (Robert Kirkham/Buffalo News)

The real wow factor comes in the hotel's two gigantic main corridors. One hosts a series of landscapes by Bronx-based artist Rebecca Allan and the other a collection of text- and fabric-based paintings and assemblages by former Buffalo artist Eric Magnuson.

Large-scale paintings by the late Buffalo artist Jack Drummer hang on the landing between the hotel's first and second floors and spill into a nearby corridor.

The project came about shortly after the opening of the hotel, which had amassed a private art collection.

"What we discerned was that the art, though we had great stuff, was literally swallowed up by this massive building and architecture," said Hotel Henry's Programming and Creative Director Kristine Hornung Pottle. Because the need to smartly install art in the hotel's large spaces was more than any one curator could pull off, Pottle reached out to Resource:Art.

It is the organization's largest project to date.

"We had some artists who were like, 'No way, no way, no way, we would never do something like that.' And now they're begging to come in," Pottle said. "All the artists that have participated came in and were just blown away by it, because the architecture lends itself to art." 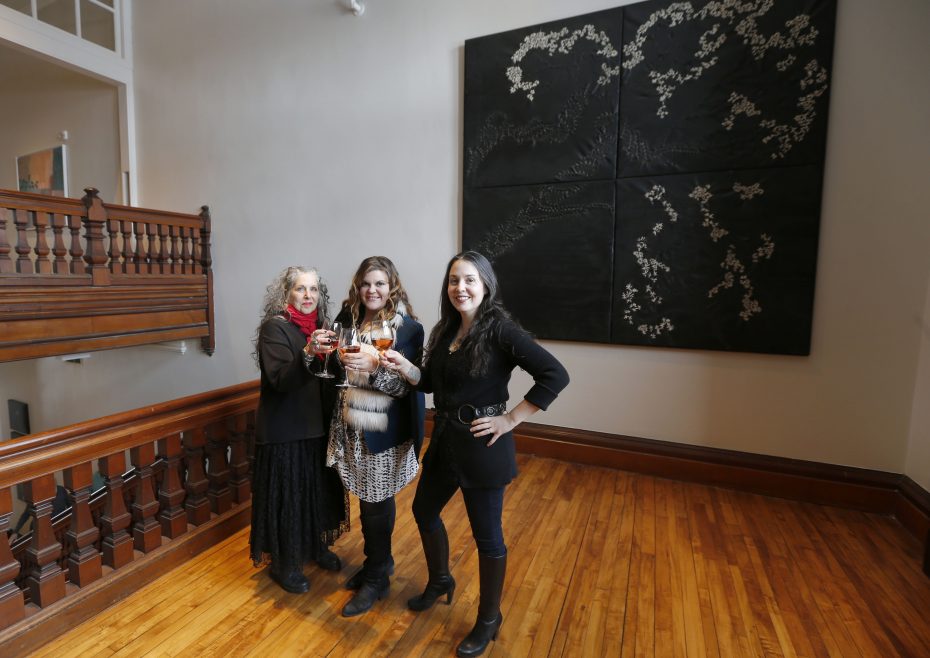 An abstract work by Jack Drummer hangs on a landing in Hotel Henry, part of a collaboration between the hotel and local curators Elisabeth Samuels, left, Emily Tucker and Anna Kaplan. (Robert Kirkham/Buffalo News)

For Montague, whose new work includes a series of paintings that grew out of a previous show at Kaplan's eponymous gallery on Niagara Street, the space has exceeded expectations that were already high.

"Once I actually saw it in that space, especially the connector space, I was really impressed with it. It was sort of better than I thought it would be," Montague said. "The art hanging in the main hallways also works well. It's a weird space in that it's crazy-long, but it doesn't feel out of place or completely cramped. I think the whole thing has worked out better than I would have imagined."

Exhibitions will run for about three months, and will most often feature a series of separate solo exhibitions. Pottle said the spaces will be open daily from 9 a.m. to about 8 p.m. Visitors are asked to check in at the Hotel Henry front desk, where they'll be given information on the current exhibition and instructions on how to navigate the somewhat confusing pathway from one gallery space to the next.

The project, organizers said, also creates a synergy between hotel guests and visitors and their own galleries.

"I think one of the amazing things about it is that it allows us to do projects that individually would be too overwhelming for us to do," Samuels said of the trio's collaborative efforts, which have so far included several pop-up shows, temporary exhibitions and "art invasions," where local residents open up their house for a one-night exhibition and art party.

"It's an opportunity for us each to have a presence outside our galleries," Kaplan said. "I really love having colleagues. It's better not to work in a vacuum."