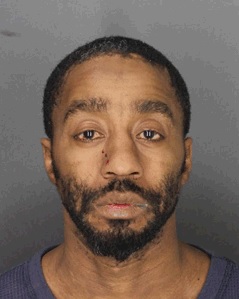 A Buffalo man released from state prison in January for maiming and robbing an elderly church worker in 1996 was charged with attempted murder on Thursday after he allegedly beat a 60-year-old woman inside Choco-Logo, according to police.

John A. Jaycox, 49, has been charged with second-degree attempted murder for the Thursday afternoon attack in the chocolate business on Broadway in Buffalo, according to court documents.

Jaycox has been accused of biting a chunk of flesh out of the victim's hand, beating her with a wooden chair and trying to break her neck, according to a Buffalo police report. She was in fair condition, police said Friday afternoon.

The alleged attack happened at about 2 p.m. and Jaycox was stopped by the victim's son who held him until police arrived, according to the report. He was also charged with third-degree burglary, police said.

Jaycox was released from Clinton Correctional Facility on Jan. 25, having served the maximum sentence for the beating of an 81-year-old woman in December 1996, according to records from the state Department of Corrections and Community Supervision.

He was arrested in January 1998, 13 months after the attack inside Grace Parkridge United Church of Christ on Hewitt Avenue, according to Buffalo News archives. Then 28, Jaycox bashed the victim in the head with a metal stool and a fire extinguisher, he admitted to police. Prosecutors said he stole several hundred dollars from the victim, who was counting collection money, to satisfy a cocaine habit.

He told police he attacked the woman because he thought she was armed, according to News archives.

Jaycox was paroled in February 2016 but went back to prison that July after violating his parole for "threatening behavior," according to a department official.

Jaycox was arraigned Friday in Buffalo City Court and is scheduled to appear at a felony hearing on Wednesday. He was ordered held without bail.