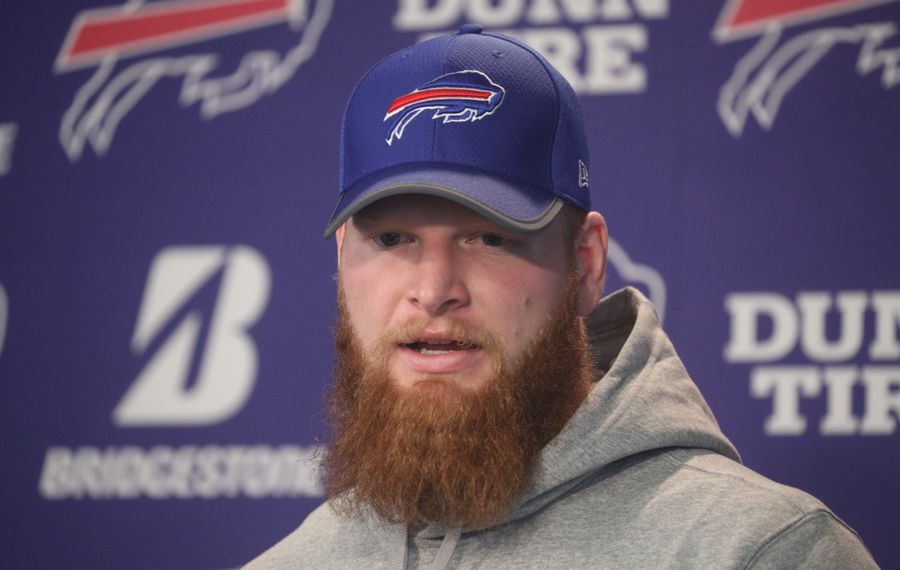 Defensive end Trent Murphy sure looks like he's going to fit in well with the Buffalo Bills, if first impressions are any indication.

Murphy was so excited to be joining the Bills, he didn't wait to take a flight Friday morning from Columbus, Ohio, to Buffalo to sign his contract.

"I drove up last night at 1:30," said Murphy, meaning he arrived in town at 1:30 a.m. "I took the drive up here because I couldn't wait and drove through the snow. That's about all I could see. From some of the tweets and Instagram posts and everyone reaching out, I couldn't be more excited."

Murphy was sporting a long beard that rivals that of his new defensive linemate, Kyle Williams.

On Instagram, Murphy commented on a post of Williams' beard saying: "Thank goodness I've been working on my wilding beard all offseason."

And Murphy spent most of his introductory news conference talking about how impressed he is with the culture Bills head coach Sean McDermott talks about.

"I kind of looked into who the Bills are, coming off of an opportunity at the playoffs and what they're trying to build and the culture here," Murphy said. "I was super excited to join the cause. I think it's the perfect fit for me."

Asked to elaborate, Murphy said: "What coach is looking for here as far as blue-collar guys, a scheme, guys that are passionate, trying to build a culture, kind of that tough, blue-collar mentality, winning, playing together, just competing."

The 6-foot-6, 260-pound Murphy fills a big Bills need at edge rusher opposite Jerry Hughes. Murphy had nine sacks and 24 quarterback hits for Washington in 2016. He tore up his knee in the first preseason game of 2017, on Aug. 10.

However, neither the injury, nor the fact he served a four-game suspension for a performance-enhancing drug penalty last season prevented a reported 10 teams from pursuing him in free agency. The Redskins made him an offer. It was reported the Buccaneers and Patriots were among the other teams most interested. The Bills secured Murphy with a $7 million-a-year deal.

"For me the Bills were the most aggressive, and this is where I wanted to be," Murphy said. "It was a no-brainer. That's why we got to it so quick."

After the suspension last May, Murphy said he ingested a tainted supplement. His appeal to the NFL was denied.

"I let my agent handle most of the discussions directly with the Bills so I don't know if that came up fully," Murphy said of the issue. "But I served that last year and kind of put it behind me. I knew it was a learning point. I learned from that and can move forward and put myself in the best position so it can never happen again."

Murphy is seven months removed from surgery to repair his torn left knee ligaments. He will be 13 months removed from the surgery by the time the regular-season starts in September. But he already squatted 470 pounds last week in his first attempt at that lift since the injury.

"I might be fairly limited when I first get here April 16," Murphy said. "But . . . I'm expected to make a full recovery. . . . The goal is to play in the season. I'll be ready to compete and contribute."

Murphy said McDermott appreciated his approach to the game.

"He said he's kind of followed my career and seen it at Stanford, seen it at the Redskins, saw how I played at the Senior Bowl, just bringing that kind of relentless passion every play," Murphy said. "That's how I play the game. I think that's how it's meant to be played. I couldn't be more excited to bring that here."