When Rue Franklin closed last year, restaurant regulars and industry folks wondered if the “death of fine dining” declared in Manhattan had, like so many cultural developments, made it to Buffalo five years later.

Since the rest of the luxe crowd has held steady since, scheduling its funeral supper seems premature. There has been little fine dining among new restaurants, however, suggesting investors lack confidence in its popularity.

A $15 fish fry with fries and cole slaw was the best dish. An $18 pizza-for-one was botched. Fine dining doesn’t require snooty dishes, but at those prices, it does require fine cooking.

When Greystone opened in the former Snooty Fox space, Chef Kevin O’Connell Jr. said he wanted to prove himself in the Buffalo market again, after returning from Los Angeles.

His menu touches traditional fine-dining ground, with a $98 chateaubriand, lobster with tomato risotto ($35) and ravioli with escargot ($23). Tasting menus are available at five and seven courses ($70, $100).

Flat 12 oyster mushrooms, grown in Buffalo, anchored the first dish ($14). They were supposed to arrive on polenta, under a fried egg, which sounded comforting. The sautéed mushrooms were meaty in a vegetarian way, and the fried egg offered more richness. But the polenta was missing, the plate heavily striped with an unmentioned surprise ingredient: balsamic vinegar syrup, the ketchup of Italian fine dining.

Meatballs of veal, pork and lamb ($16) were two tennis-ball-sized orbs, dressed in tomato sauce and a streak of pesto. The sauces had more flavor than the meatballs, which were chewy and cool at their cores, not quite reheated.

Lobster mac and cheese ($22) was terrific, though, an extravagant, over-the-top experience. Almond-sized gnocchi was bathed in a cheddary cheese sauce that also held a split, shelled lobster tail. The shellfish was tender and plentiful – no poking around looking for lobster. There was enough cheese sauce to dress another order of gnocchi, which I would have gladly done. 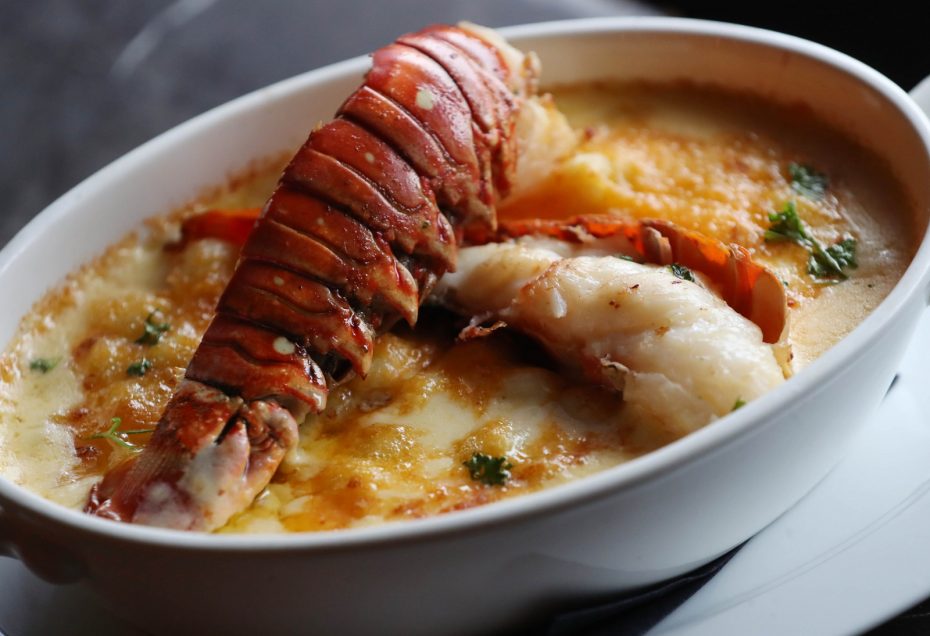 The Greystone's lobster mac and cheese is made with gnocchi, lobster meat, truffle and a three-cheese gratin. (Sharon Cantillon/Buffalo News)

Fried cauliflower bagna cauda and carrots with mint (both $14), showed how canny cooking can turn common vegetables into royalty. Cauliflower florets were deep-fried to a color, and flavor, reminiscent of french fries. Then they were elevated by a rustic, but refined, spread of nuts, garlic and anchovy, parsley and a spritz of lemon.

Small, sweet heirloom carrots were split lengthwise, and bathed in truffle honey and mint. With pine nuts adding a toasty crunch, I was happy to eat my vegetables. 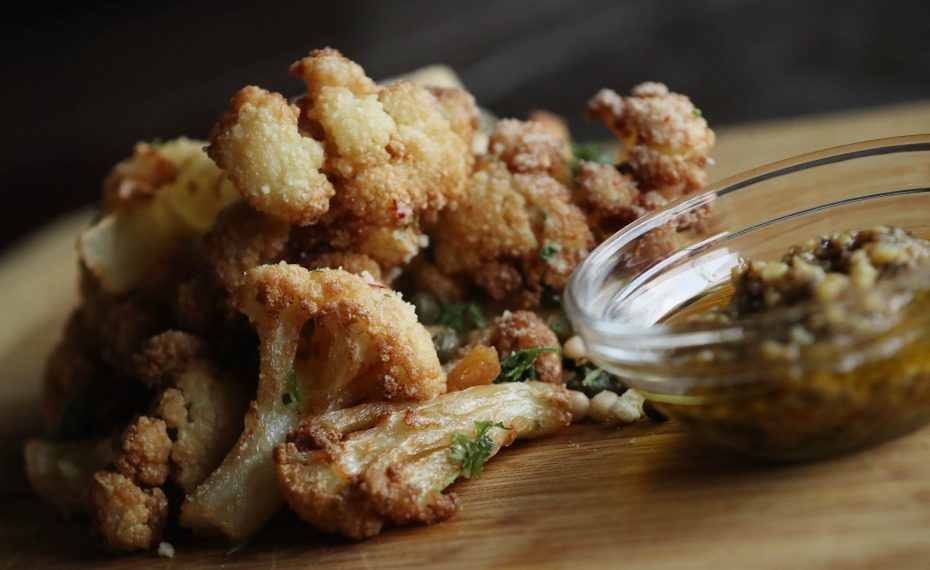 Not so the Alla Nduja pizza ($18). Nduja is a Calabrian-style spreadable salami, pungent stuff, hard to miss. I could not find it on the pizza, which was topped with chunks of sausage and whole pitted Mediterranean olives. They were piled on a crust that was blasted to hardtack at the edges while undercooked in the middle. We abandoned it and looked forward to the entrees.

The server told us the pasta was made in-house, which raised my interest. I asked her to check, since I didn’t know anyone in Buffalo making spaghetti. She confirmed.

Two pastas arrived, spaghetti carbonara ($21) and orecchiette with sausage ($22). If this was fresh pasta, all the springy life had been boiled out of it. The carbonara was bacon-flavored heavy cream instead of traditional carbonara, which is made without using that dairy crutch.

Ear-shaped orecchiette was tossed with ragged clods of sausage, bitter greens and lots of chile flake to fire up the flavor. A robust dish, but if the sausage were crumbled it would have incorporated better in each forkful. 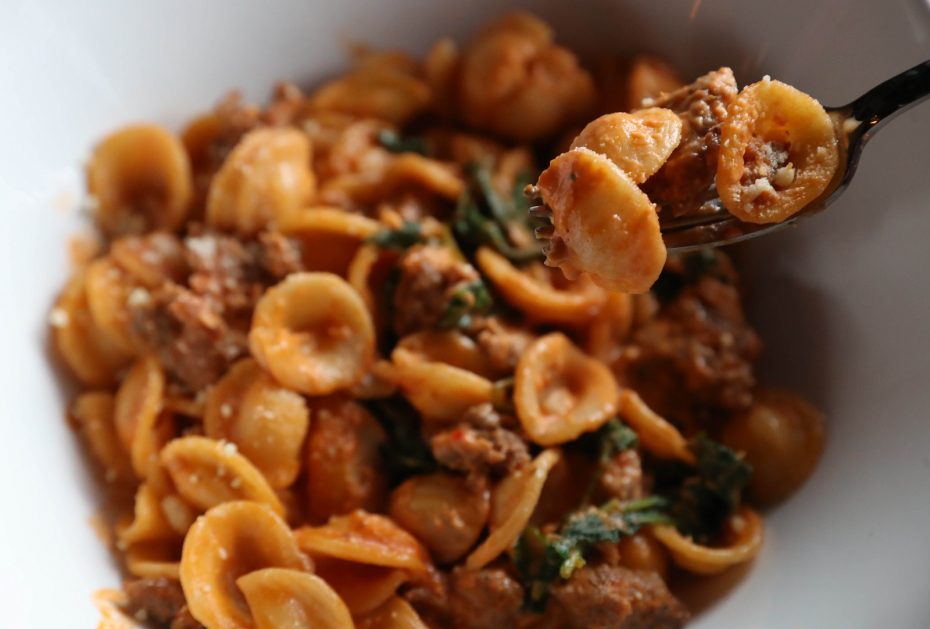 I had no beefs with the steak. Filet mignon ($35, featured photo) was spot-on medium-rare, served with mashed potatoes, a drizzle of pesto oil and a handful of roasted garlic cloves.

Chicken Milanese ($25) is a Buffalo standard. Chicken cutlet, beaten out so it cooks faster and crispier, on an arugula salad with lemon and such, is a personal favorite. So when I got an unbeaten, thick breast coated in crumbs, I was not surprised to find it one tough bird.

I was thinking fish fry, anyway. Guests enter the restaurant through the bar room. It has two televisions, but what caught my eye on the way in was a magnificent-looking piece of battered fish being tackled by a bar customer.

There’s no rule that fine dining restaurants can’t cherry-pick dishes from family menus, as long as they’re premium versions. And The Codfather ($15) was the acme of a crackly crusted fish fry, with a hefty piece of flaky cod inside its bronze jacket. Crispy fries, cool slaw and tangy tartar sauce completed the pretty picture.

Dessert ($8), slices of chocolate and carrot cakes from Greystone neighbor Panaro’s, were good.

Fine dining doesn’t guarantee you a mind-blowing meal, but it’s supposed to ensure a basic level of competence and eliminate unwelcome surprises. Paying those prices should ensure a pleasure cruise. Dinner at the Greystone had so many ups and downs, it felt more like a ride at Darien Lake. 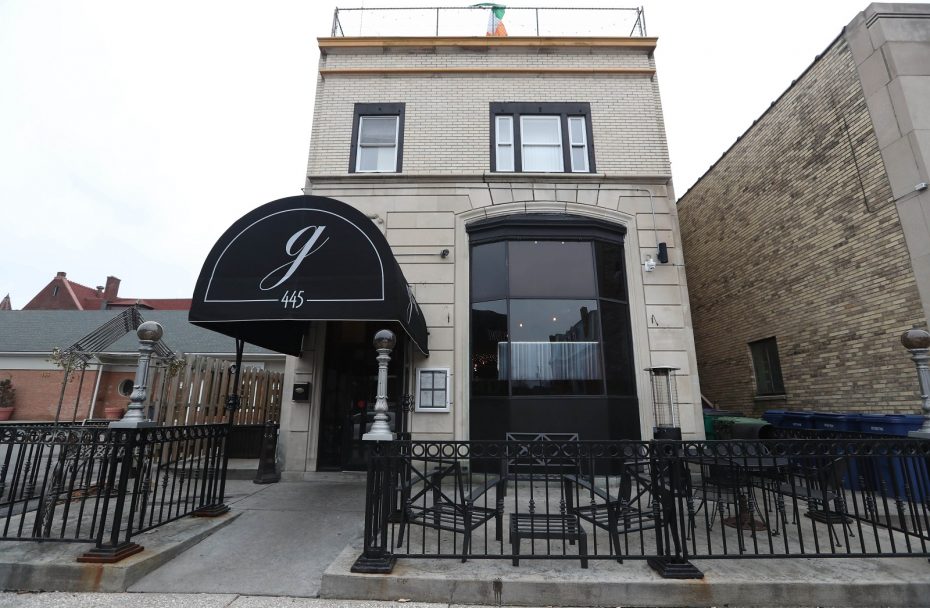 The Greystone is at 445 Delaware Ave. (Sharon Cantillon/Buffalo News)

*Read last week's dining review, below, or click on the 'restaurant reviews' tag below for more options.