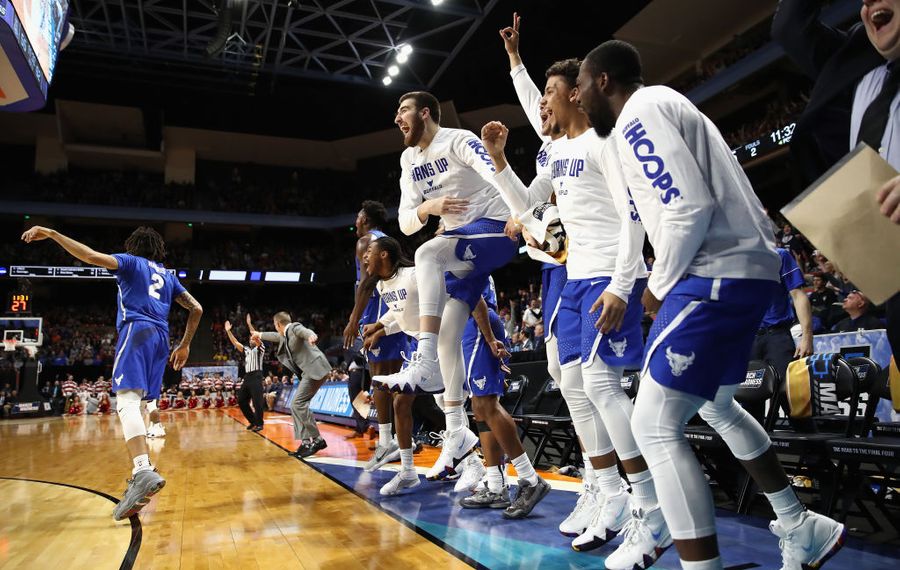 The University at Buffalo earned the biggest win in program history late Thursday night by upsetting fourth-seeded Arizona in a blowout in the first round of the NCAA Tournament, 89-68.

It was UB's first ever win in the NCAA Tournament, taking down potential No. 1 overall draft pick Deandre Ayton and the heavily favored Wildcats at KFC Center in Boise, Idaho. Arizona was picked to win in 90.2 percent of brackets on ESPN.com.

UB's reward for knocking off one national powerhouse is another in the next round: It faces fifth-seeded Kentucky at 5:15 p.m. on Saturday.

UB got it done Thursday with guard play and defense, scoring early and often and never looking back. Senior guard Wes Clark led UB with a game-high 25 points while Jeremy Harris had a strong game with 23 and CJ Massinburg scored 19.

UB did a masterful job of keeping potential top NBA draft pick Deandre Ayton in check, holding the 7-foot-1 freshman to 14 points on 6 of 13 shooting while being pestered by Ikenna Smart and Nick Perkins. Star guard Allonzo Trier tried to take things into his own hands and couldn't convert, scoring just 10 points on a 4-of-15 night. Dusan Ristic, Arizona's 7-foot center, led the team with 16 points.

Bulls coach Nate Oats' quote from UB's selection show party proved prophetic: "Ayton might be the No. 1 pick in the draft. I will say this though: You usually win in the NCAA Tournament with guards," Oats said at Santoras Pizza Pub & Grill after learning their draw. "I like our guard play against them.”

First half: UB was impressive in the first half and led 40-38 at the break. The Bulls had some trouble with Arizona's size but weren't intimidated by the Wildcats. CJ Massinburg opened the scoring with a three-pointer and UB held the lead for the majority of the half. Arizona used a 9-0 to take its first lead at 23-21 with 7:57 left before halftime, but UB's Ikenna Smart answered quickly with a hook shot. UB did well to control the pace in the first half, pushing the tempo and running against an Arizona team that doesn't like to go to its bench. A late three-pointer from Wes Clark put UB ahead going into the locker room.

Jerry Sullivan: Pinch yourself – UB blows out Arizona in the Big Dance

Arizona stars Deandre Ayton and Allonzo Trier were held to 11 points combined in the opening period while UB's Jeremy Harris led all players with 14 points and Clark had 13. UB controlled the glass early against a bigger Wildcat team, holding a 19-13 edge in the first half, but turnovers kept them from extending the lead. UB coughed it up nine times in the first half to Arizona's three. Arizona players were only called for two fouls in the first half.

Second half: UB remained unafraid of a bigger Arizona team early in the second half, tying its largest lead of the game at 55-48 with 15 minutes to go and pushing it to eight at 60-52 with 12:30 left. The longer the game went on, the more it seemed UB could maybe, actually do this. Arizona would counter a good UB possession and the Bulls would answer back. The moment it felt real was when Dontay Caruthers missed a layup in transition but UB got a quick steal and Jeremy Harris hits a 3-pointer instead to make the lead UB 65, Arizona 55 with 11:21 to go. CJ Massinburg banked in a three to make it 70-67. Perkins bounced in a three-pointer to make it 75-58 with six minutes left.

Arizona took timeout after UB went up 77-60 with 5:09. At that point, the game was rapidly changing from "this could happen" to "it would take an epic collapse to blow this." UB never allowed Arizona to threaten while closing out the big victory.

Tournament history: This was UB's third NCAA Tournament game in its history. Its previous appearances were in 2016, Oats’ first year as head coach, when the Bulls lost to 3-Miami as a 14-seed, 79-72, and in 2015, when they were a 12-seed under Bobby Hurley and lost to 5-West Virginia 68-62. Arizona is a perennial tournament team, missing only two tournaments since 1985.

Nate Oats revels in UB's huge win: 'We got a chance to beat Kentucky!'

Next: The winner faces fifth-seeded Kentucky in the Round of 32 on Saturday. Kentucky outlasted 12-seeded Davidson earlier Thursday, winning 78-73 behind 25 points from 6-foot-9 forward Kevin Knox while Shai Gilgeous-Alexander added 19. Kentucky is ranked 17th in the Kenpom.com ratings; Arizona was 21st.