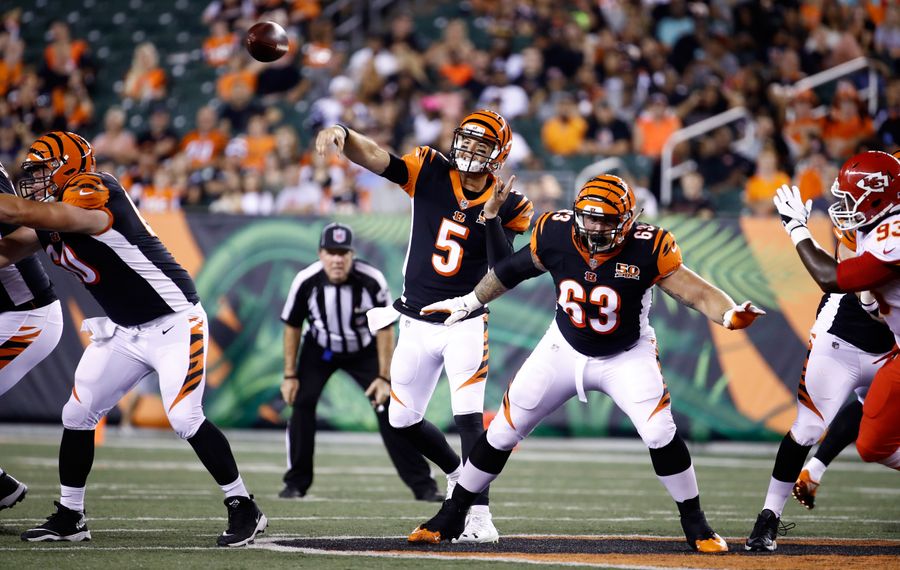 AJ McCarron has great intangibles and he knows how to operate the quick, precision passing game.

For those two reasons, McCarron looks like a fine fit as a "bridge" veteran quarterback for the Bills, who signed him as a free agent on Wednesday.

Where should Bills fans set their expectations bar on McCarron?

Keep this reality in mind: He's no Andy Dalton. The Bengals watched Dalton and McCarron live side by side every day in practice for four years, and McCarron never once threatened Dalton's grip on the No. 1 QB job. He never got a sniff of the field, except for a five-game stint when Dalton was injured in 2015 and two brief mop-up duties late last season.

Further supporting that reality is the fact McCarron was one of the last QBs standing on the opening day of NFL free agency.

QBs who found new homes before McCarron's deal with the Bills closed included: Kirk Cousins, Case Keenum, Sam Bradford, Chase Daniel, Mike Glennon, Trevor Simien, Josh McCown, Teddy Bridgewater and Tom Savage. That doesn't mean McCarron's not better for the Bills than Savage, McCown, Daniel, Glennon or others. Yes, Nick Foles was on the trash heap exactly one year ago and wound up winning a Super Bowl. But plenty of QB chairs were available. So don't get too excited about McCarron.

Nevertheless, he makes perfect sense for a Bills team that is primed to draft a rookie franchise quarterback high in the first round.

How good are McCarron's intangibles?

Consider the defining moment of his limited on-the-field NFL career:

The Bengals were trailing Pittsburgh, 15-0, entering the fourth quarter of the 2015 wild-card playoff game in Cincinnati. After three quarters, McCarron was 14 of 25 for 118 yards with one TD and one interception.

In the final 15 minutes, he engineered three scoring drives. His 25-yard TD pass to A.J. Green with 1:56 left put the Bengals ahead, 16-15. The Bengals blew the lead in a collossal, emotional meltdown, but that wasn't McCarron's fault.

McCarron is confident, and he has won all his life. He was 36-4 as the starter at Alabama, where he won two national championships. The moment is not too big for McCarron. He's smart and he loves football. He has tutored the past four years on an excellent coaching staff and with a smart starting QB in Dalton.

McCarron lasted until the fifth round of the 2014 NFL Draft because teams didn't see him as an elite NFL athlete and did not see an elite arm talent.

"At this position it’s not all height, weight, speed," said former Bengals QB coach Ken Zampese when McCarron was drafted. "It’s about what are the intangibles and how do they fit for you, and does he have the perseverance and the determination to fight through some of the things that are going to happen to him in the process.”

McCarron had great talent around him at Alabama and he had great skill-position weapons in Cincinnati. In his brief stint on the field in 2015 – essentially five games – he completed 66.4 percent in the Bengals' possession-oriented pass game.

His ability to get the ball out of his hands is something Ravens coach John Harbaugh addressed before facing the Bengals in 2015 while also complimenting Hue Jackson, the former Bengals coordinator and now Browns coach.

"He really has a quick release," Harbaugh said of McCarron. "His accuracy, his decision-making at Alabama were really good, and you see that with the Bengals so far. Plus, I would say this, too: Hue Jackson does a great job. He has done a really good job of building the offense through the years."

Now we have six weeks to find out who McCarron will be helping tutor.