The seven Humboldt penguins in the Aquarium of Niagara have been around for years, but now they may like the look of their new digs.

Wednesday marked the grand opening of their $3.5 million Penguin Coast habitat, the first of a series of planned upgrades to the Niagara Falls attraction.

"We had to pull down the existing very-degraded exhibits," said Gary K. Siddall, Aquarium executive director.

They'll swim in a 15,000-gallon saltwater pool. A skylight and 32 high-intensity lights simulate sunshine. And seven cave-like nesting boxes cut into the simulated rocks  contribute to better habitat for the birds.

Siddall hopes to have as many as 20 penguins in the habitat by the end of the year, mostly through acquisitions from other aquariums and zoos.

The seven local penguins are older and are unlikely to reproduce. The oldest turns 30 on Friday, and the youngest is in his mid-teens, Siddall said. In the wild, a Humboldt penguin's life expectancy is 14 to 17 years.

"The ideal would be, once there's a full population in the exhibit, that mating pairs would take a cave. They are still kind of figuring those out," Siddall said.

The penguins – native to the Pacific Ocean shores of Peru and Chile – splashed, swam and waddled as dignitaries talked about their hopes of using them to bolster Niagara Falls' economy and tourism.

"We want to educate people when they come to Niagara Falls, not just entertain them," Mayor Paul A. Dyster said. 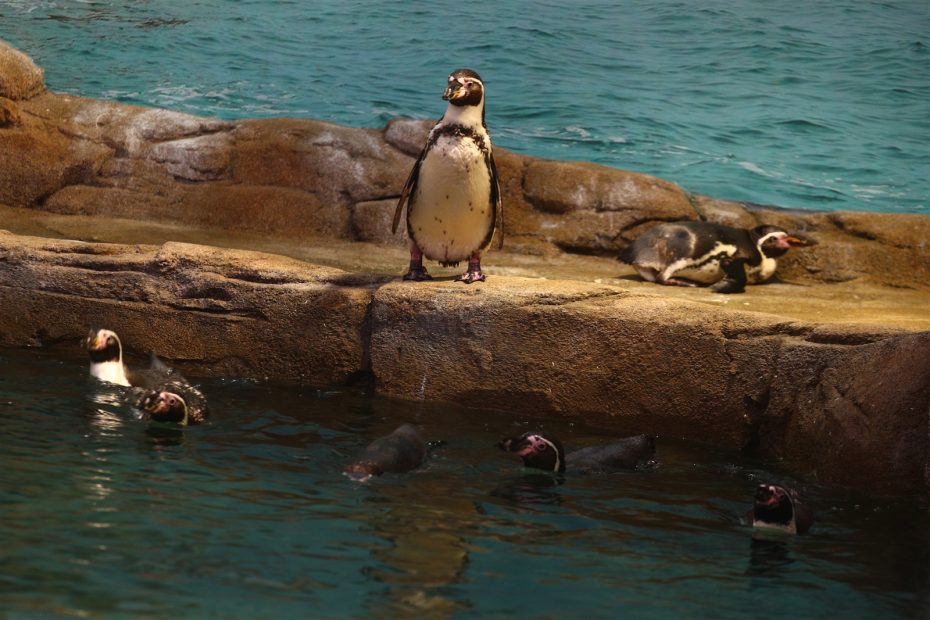 Humboldt penguins in their new Penguin Coast habitat at the Aquarium of Niagara. The aquarium hopes to have as many as 20 penguins by the year's end. (John Hickey/Buffalo News)

The Aquarium already has disclosed plans for a new jellyfish exhibit, targeted to open this year. There also has been a lot of work on amenities.

"When tourists come in, they're not as willing to forgive our 1970s bathrooms and our outdated entranceway," Siddall said. "Making improvements to those phases has been really important in terms of the direction we're taking the Aquarium."

Funding for the penguin habitat included $1.75 million from the New York Power Authority; $400,000 in other state grants; and $150,000 from the city. The city share came from Seneca Niagara Casino revenue, Dyster said.