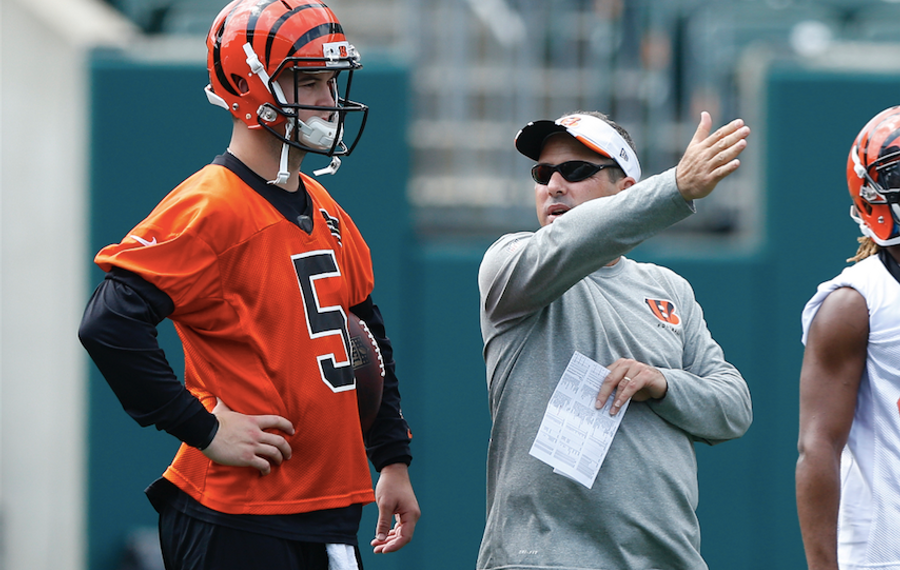 Taken for what it is, the Buffalo Bills did about as well as they could have done with Wednesday's signing of AJ McCarron.

They needed a temporary quarterback solution, someone who could possibly get them through some games, maybe a season, while their actual long-term starter who has yet to join the team watches and learns. That's the definition of a "bridge."

Who knows? After a competition, McCarron could very well be the one watching as the QB the Bills are fully expected to select in the first round of next month's NFL Draft starts from Day One.

Either way, McCarron fits the profile of what the Bills envisioned as the experienced arm they previously lacked. After trading Tyrod Taylor to the Cleveland Browns last Friday, 2017 rookie Nathan Peterman was the only quarterback the Bills had.

Words like "experienced" and "veteran" have to be used loosely with McCarron. Despite spending the past four seasons with the Cincinnati Bengals, he was a backup who only made three regular-season starts and also started a wild-card playoff game.

He didn't have the accomplished resume of many of the other free-agent quarterbacks who received more money in the open market than the two-year, $10-million contract Pro Football Talk reported that McCarron got.

But for the role the Bills had in mind for a quarterback they would acquire in free agency -- making a trade with the Philadelphia Eagles for Nick Foles never seemed as a genuine option -- they didn't need to pay a whole lot more. They gave McCarron a contract befitting a backup, with the chance to increase his pay by as much as $6.5 million depending on how much he plays.

And how much he plays takes us back to the most important aspect of the Bills' quarterback picture in 2018 and beyond: Who they draft on April 26.

McCarron is the second piece of that puzzle that has come courtesy of the Bengals. The first is the 12th overall pick the Bills acquired in exchange for the 21st choice and offensive tackle Cordy Glenn.

That trade opens the door to the likelihood of the Bills packaging the 12th and the 22nd pick (from last year's trade with Kansas City) to climb higher for their franchise quarterback, if the one they target doesn't fall to them at 12.

That will be the thrust of pretty much all of the Bills' quarterback discussion after April 26.

McCarron is an afterthought. Most any free-agent QB the Bills would have signed this side of Kirk Cousins would have been viewed through the prism of someone keeping the seat warm for USC's Sam Darnold, UCLA's Josh Rosen, Oklahoma's Baker Mayfield or Wyoming's Josh Allen.

That isn't to say McCarron is incapable of making a meaningful contribution. He's an unknown quantity and he has a chance to carve out something that has yet to happen for him as a pro.

His statistics in 11 career regular-season games are solid: 920 passing yards and six touchdown throws, with two interceptions. The same goes for what he did in a wild-card playoff start against the Pittsburgh Steelers, completing 23 of 41 passes for 212 yards and a touchdown, with one interception.

His limited talent told the Bengals they were better off sticking with Andy Dalton as their starter, even though fan unrest with the team's perpetual one-and-done playoff appearances led to calls for McCarron to take over.

The Bengals weren't wrong to stick with Dalton. The Bills know what McCarron is and wisely made him the modest choice for a modest role, which is to serve as an understudy (eventually or immediately) for the rookie quarterback who has yet to join their roster.