Today's question for readers: Considering what's shaping up in Erie, Pa., do you want Erie to hit 200 inches and sweep past Buffalo's 41-year-old standard of 199.4 inches of seasonal snow? Or do you hope the snow surge in Erie peters out and Buffalo's legendary winter of '76-77 retains that longtime status? Whatever your feeling, feel free to leave a comment below or to email me at skirst@buffnews.com.

Pat DeCoursey is the oracle of the Golden Snow Globe, a guy fascinated with big city snow. With a monumental national record at stake, he spent the weekend going through many years worth of snowfall records for the 40 snowiest large cities in the United States, and this is what he discovered:

Buffalo's monster 199.4 inch snowfall of 1976-77, a total always associated emotionally with the fierce Blizzard of '77, is almost certainly a modern record for large American cities, population at least 100,000.

It is also a record, after 41 years, that may be ready to fall.

Erie, Pa., the latest challenger, is knocking at the door. As of Tuesday evening, Erie had climbed to 188.6 inches of snow, less than a foot away from surpassing Buffalo's epic winter. And Marty Thompson, a meteorological technican with the National Weather Service in Cleveland, said more snow is expected in Erie over the next few days.

It might only be a couple of inches. But in a burst of weather similar to what we're seeing in Buffalo, it is possible that Erie could pile up as much as eight more inches of snow by Thursday morning, which would put the city close to 196 inches. Besides Buffalo, among large U.S. cities, only Syracuse - which has twice recorded snowfalls in the low 190s - has ever gone beyond 190.

All these comparisons are based on research by DeCoursey, who doesn't claim to be the ultimate meteorological statistician. He always knew Buffalo held the seasonal snowfall record for large Upstate cities, but he wanted to learn if that also held true across the nation.

Maybe, someplace, there's some phenomenal number he missed - and if he did, he'd love to hear about it. DeCoursey, for instance, did find one strange historical reference to a 201.5 inch snowfall in Flint, Mich., for the winter of 1894-95. But that is a curious number, to put it mildly, since he said Flint has no other winter that went beyond even 100 inches.

And Alex Manion, a weather service meteorologist in Detroit, said "the data was so unreliable back then that we don't even use it for our records." 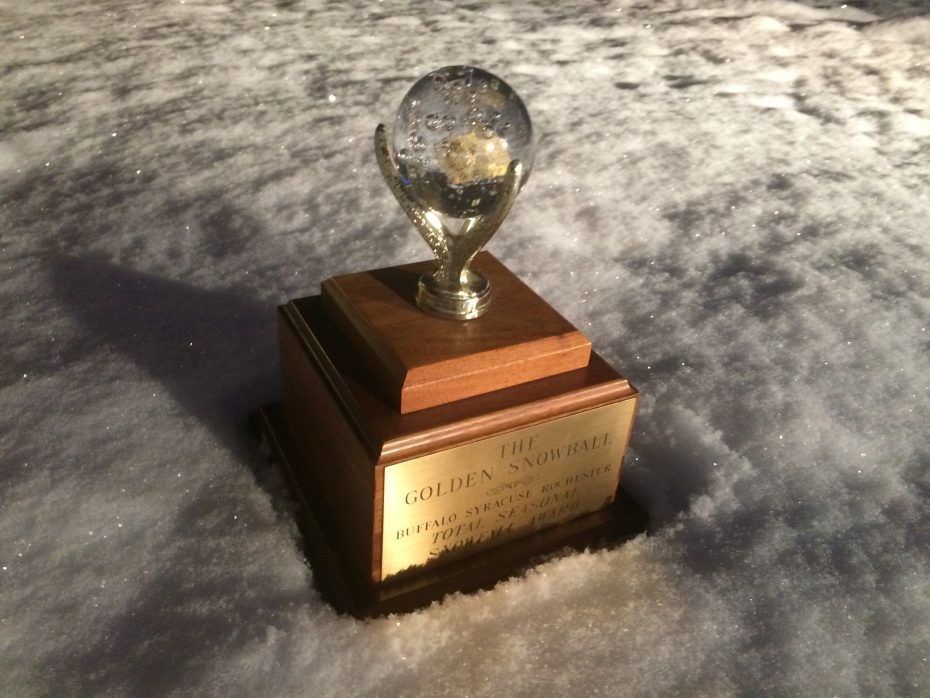 DeCoursey, by the way, is the snowfall oracle. Fifteen years ago or so, purely as an act of curiosity and passion, he breathed new life into the classic Golden Snowball competition, the annual contest created in the 1970s that informally crowns the big Upstate city with the greatest total snowfall.

Usually - as will undoubtedly happen this year - that's Syracuse, which this winter has 134.5 inches of snow, well beyond the 103.6 inches for Rochester and 98.0 for Buffalo. Yet DeCoursey - an Upstate native who now lives near his first grandson, in North Carolina - eventually created a contest to include all large cities in the U.S.

What he learned is that Buffalo's snowfall of 1976-77 was both a seasonal freak, and seemingly untouchable. At the time, according to David Sage - a now-retired meteorologist who worked for decades in Buffalo - the city broke its own snowfall record by more than 70 inches.

Before this year, except for the incursions made by Syracuse into the 190s, no one else had ever come close. That includes Buffalo itself, where 100 inches is a lot of snow for the season.

Until now, with this big surge in Erie.

Tweets from TJ Pignataro, weather writer for The Buffalo News

So DeCoursey spent the weekend poring over snowfall records for the 40 snowiest cities on his chart, population 100,000 or more. He's awfully thorough, but he makes no claim to climactic statistical perfection: If he's missing something somehow, he'd love to hear about it. Still, he sees the bottom line as this:

If it keeps snowing to the west of here, Erie, Pa., may become the first large U.S. city in modern history to go beyond 200 inches of snow for the winter, wiping out a formidable Buffalo record in the process.

From Maki Becker and TJ Pignataro: Buffalo could get eight inches of new snow

DeCoursey said one of his many weather correspondents, a loyalist from Buffalo, wrote wistfully that he hopes Erie makes it to 199.3 .... and then stops, thus preserving a record from a fabled winter. As for Thompson, the meteorological technician in Ohio, he said the overall picture for this time of the year always involves a late winter warmup toward spring, but it is also possible for the open waters of Lake Erie to occasionally kick the lake-effect machine into a few last furious spasms.

Could Erie climb the snowfall Everest, and go past 200 inches of snow?

"It's not impossible," Thompson said, "but it's not easy to pinpoint."

Sean Kirst is a columnist with The Buffalo News who wonders: Do you want Buffalo's record to fall or do you hope it withstands Erie's challenge? Does it matter to you or are you simply ready, one way or another, for the snow to stop? Email Kirst at skirst@buffnews.com or read more of his work in this archive