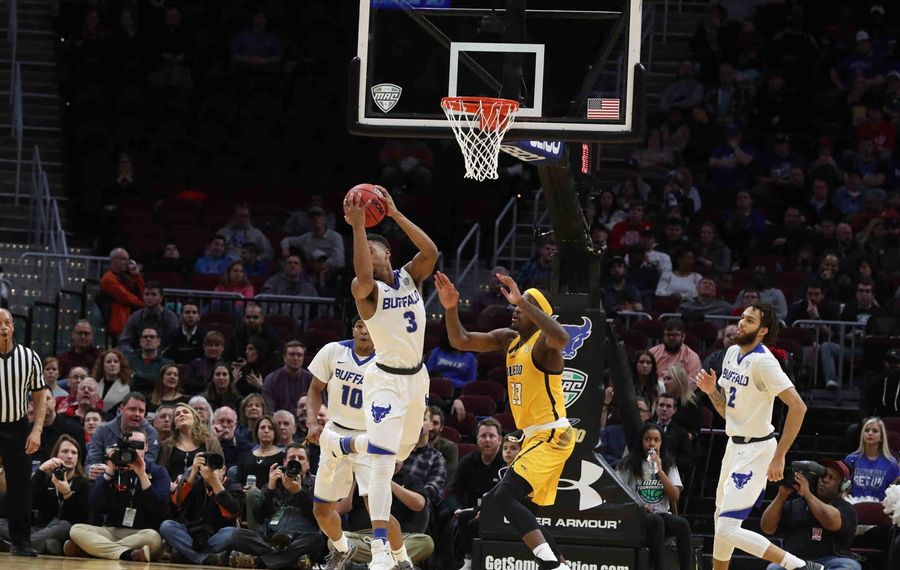 It appears that WIVB-TV (Channel 4) made a makeup call on Monday night.

After the station waited 17 minutes into its 11 p.m. Sunday newscast to run the story about the University at Buffalo and St. Bonaventure making the NCAA men's basketball tournament, Channel 4 led its 11 p.m. Monday newscast with the news that the UB women's team received an at-large bid into the NCAA tournament.

The placement of the women's basketball story at the top of the newscast certainly seemed like an apology or an admission of a mistake after the accomplishment of the men's teams was viewed Sunday night as less important than a story about potholes.

The UB women's team got its due from the Big Three network affiliates, with both Channel 4 and WGRZ-TV (Channel 2) airing the team's tournament bid before a story about the Buffalo Bills trading left tackle Cordy Glenn to Cincinnati in a deal that enabled them to move up nine places in the first round of the NFL draft. The UB story ran second, the Bills story third.

Channel 2 actually led with a story about a Buffalo State graduate's quest to have the Bills remove O.J. Simpson from the team's Wall of Fame in the aftermath of Simpson's 2006 "hypothetical" interview about the murders of his ex-wife Nicole Brown Simpson and her friend Ronald Goldman airing on Fox Sunday night.

WKBW-TV (Channel 7), the station of the Bills, was the only one to lead with the Glenn story over the UB women's story. Of course, this being Channel 7, the 11 p.m. newscast led with a weather report.

Then former sports director Jeff Russo, who is now the station's news co-anchor, got on an actual ladder to illustrate the Bills had climbed several spots in their mission to find a franchise quarterback.

I had to laugh.

While the Glenn story came in time for the earlier newscasts and the UB news was fresher, anything significant involving the Bills is bigger than anything involving the Bulls.

Channel 7 was the station that made the right call.

The UB women's team is writing an impressive story, but there is nowhere near the interest in them as there is in the Bills.

As if any evidence is needed, the local rating Monday night for ESPN's Women's Selection Show provided it.

The program started with a 0.2 rating from 7 p.m. to 7:15 p.m. when the suspense over whether UB would be selected as an at-large team ended. The program had a 0.4 for the first hour.

The men's Selection Show on Sunday, when UB learned it would be playing Arizona and St. Bona learned it was in the play-in game tonight against UCLA, had a 3.6 local rating on TBS.