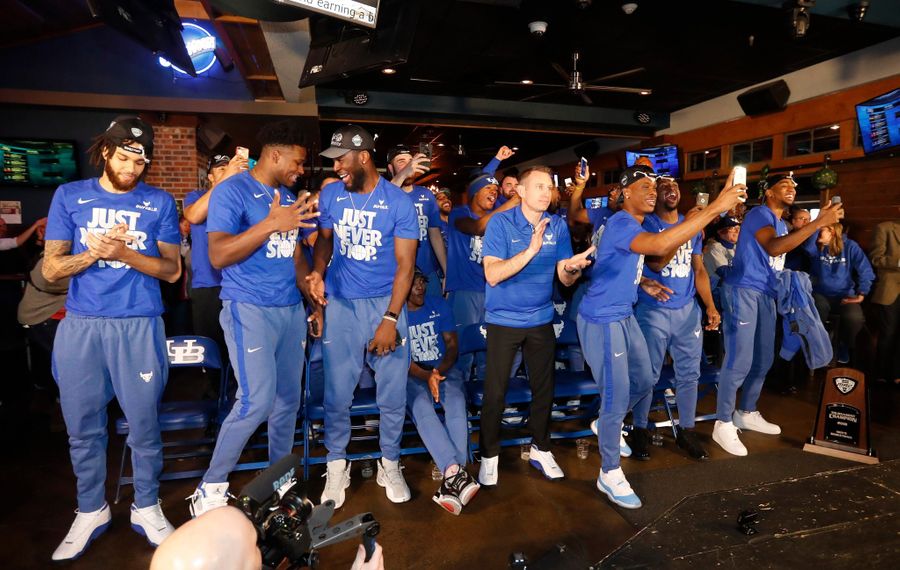 University at Buffalo men's basketball is a No. 13 seed in the South Region and will play fourth-seeded Arizona in Boise, Idaho, in the first round of the NCAA Tournament on Thursday.

UB earned an automatic bid to the tournament by defeating Toledo in the Mid-American Conference Tournament title game on Saturday in Cleveland.

This is the Bulls' third trip to the NCAA Tournament in the past four years and second under head coach Nate Oats.

When they say your name on the NCAA selection show pic.twitter.com/1iBTQ6hj2K

This season, the Bulls set program records for MAC victories and home victories and earned the school's third regular-season MAC title. UB, which boasts a 26-8 record, enters tournament play on a six-game winning streak dating back to Feb. 20.

"We're a team of many traits, fast paced, we can run and we hard-nosed," UB forward Nick Perkins said after the MAC championship game Saturday. "This is blue collar, that's our thing. We tough. Got a lot of guys that can score, so all around just a really good team 1 through 15."

Arizona is coming off a 75-61 victory against the University of Southern California in the Pac-12 title game, the program's seventh conference tournament championship. The focal point of the Wildcats is star forward DeAndre Ayton. The 7-foot-1 freshman is averaging 20.3 points and 11.5 rebounds and is projected to be a top-five pick in the upcoming NBA Draft.

The Bulls previously made the Big Dance in 2015, its first trip in program history, and 2016. They've never been seeded higher than No. 12.

According to UB, seating priority will be given to UB students and Blue & White fund donors based on loyalty points. Tickets are $100. Fans must commit to purchasing tickets to the first and second round, but will only be charged for the second round if the Bulls advance. More ticket info is available at UBBulls.com.

St. Bonaventure to play UCLA in First Four at Dayton